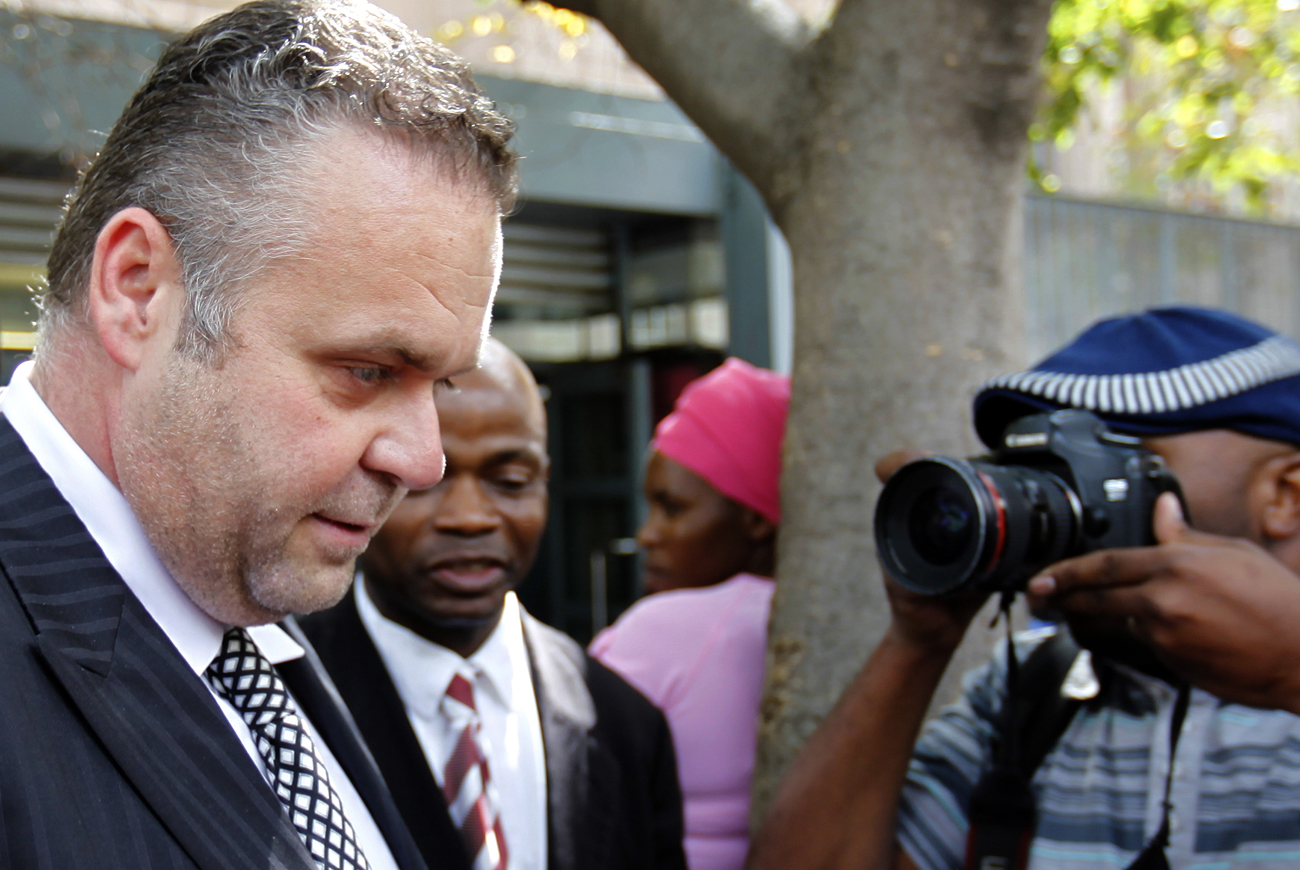 If he is not evading the possibly imagined dark forces of the Czech Republic, then he is battling with the South African judicial system. In fact, his life sounds as persecuted as that of another imaginative Czech, Franz Kafka, except that Krejcir almost always has a ready smile. And a battery of lawyers. By KARYN MAUGHAN.

Radovan Krejcir likes to refer to himself as the “banana skin man”.

“Whenever anything bad happens, anyone dies… people say it’s me. It’s always me that people blame, they say ‘ah, it is him’.”

The 43-year-old Czech fugitive has become adept at playing the strangely accented Don to the dozens of journalists who document his almost predictably regular brushes with the South African justice system. He smiles and waves after a weekend spent in a Pretoria holding cell. He cracks jokes about the charges against him.

But, whether bantering with his sunglasses-wearing entourage during court breaks or giving pensive comments on the cases against him, Krejcir is constant about one thing: his portrayal of himself as a victim.

Accused of fleeing the Czech Republic to escape prison time for fraud and tax evasion and arrested at OR Tambo International on a false passport, Krejcir claimed he was the victim of a deadly political conspiracy in his home country.

After he was arrested on an Interpol red notice, Krejcir told the Kempton Park Magistrate’s Court he was tortured and falsely accused of criminal charges orchestrated by the Czech government. These shadowy state forces, he claimed, were behind the “elimination” of his father, Lambert.

In claims that he has repeated in three different court cases, Krejcir says his troubles began in 2002. It was then, he said, that he used the millions he was making as a successful businessman to fund the election campaign of Czech Social Democratic Party candidate Stanislav Gross. He claimed Gross promised to hand him control of a state-owned petroleum company in exchange for his financial support.

But, after Gross was elected, Krejcir claimed it all went horribly wrong.

“Gross, however, informed me that he was not of intent to honour the agreement and indicated that it would be better if I simply handed back the promissory note and let the matter be. I was outraged and threatened to alert the media about his behaviour.

“During July 2002 I was arrested on trumped-up charges of fraud and detained for a period of seven months during which I was physically and psychologically tortured so as to reveal the whereabouts of the promissory note.”

Krejcir would later hint that this alleged torture – vehemently denied by the Czech government – was the root of his self-admitted mental problems (he takes medication to manage his depression and bipolar disease). It also coincided, according to Krejcir, with the disappearance and suspected murder of his father.

So Krejcir said he did what any reasonable victim of state-sanctioned torture, abduction and murderer would do: he ran. After operating a car-rental company in the Seychelles, Krejcir obtained a false passport under the name Julius Egbert Savey and fled to South Africa.

Minutes after touching down in Johannesburg, Krejcir was arrested. The Czech government, assisted by the National Prosecuting Authority, then brought what should have been a fairly routine extradition application.

Czech authorities vehemently denied Krejcir’s conspiracy claims. They said Krejcir was part of a vicious Czech crime ring and had fled to the Seychelles to avoid facing charges of conspiracy to murder, counterfeiting, tax evasion, extortion and abduction. He was also convicted in absentia on charges of tax fraud by the Prague Municipal Court and sentenced to six and a half years in prison.

But, in a ruling that was overturned on appeal, the Kempton Park Magistrate’s Court refused the extradition request.

And that would be the pattern of Krejcir’s interactions with the NPA over the following six years. He would be named as a suspect in several high-profile murders but never actually charged, arrested in a blaze of publicity on disparate charges of faking cancer for cash and robbing Pakistani business people. But, as yet, he has never actually been tried.

But Krejcir now has at least one less criminal trial to worry about.

The star witness in his R4,5million insurance fraud case, urologist Dr Marian Tupy, has turned on the prosecutors who finalised his plea and sentence deal. Tupy agreed to plead guilty to swopping Krejcir’s bladder tissue samples with that of a cancer patient – in an alleged attempt by the Czech to secure a pardon. According to the state, Krejcir then used his fake cancer diagnosis to cash in on his dread disease policy from Liberty Life.

It seemed like a simple case. Krejcir doesn’t have cancer. But he does have R4,5million. It should have been easy to prosecute.

But, weeks before he was due to take the stand, Tupy backed out.

In an application described as the first in South African legal history, Tupy has applied for his plea deal and fraud conviction to be overturned and replaced with an indemnity deal. Tupy wants immunity from prosecution in exchange for his testimony against Krejcir. He claims he was “bamboozled” into the plea deal by investigator Paul O’Sullivan, who secured his evidence for the Hawks.

The NPA and O’Sullivan claim Tupy’s allegations are absurd.

“It’s surprising, because plea and sentence agreements are preceded by a consultative process with all the parties to those agreements,” says the NPA’s Mthunzi Mhaga.

“We were really taken aback by the application and it’s actually disturbing because it’s stalling the court prosecution. Tupy’s not recanting the implicating evidence or incriminating evidence against Mr Krejcir. Which means we still have a strong case against Mr Krejcir. There’s nowhere in Tupy’s papers where he appears to retract what he said, which means if Krejcir’s celebrating now, I’d advise him not to do it. Provisional withdrawal is not an acquittal.”

If and when the NPA manages to win its litigation against Tupy and then persuade him to be a co-operative witness, Krejcir’s lawyers say they have another weapon in their legal arsenal: proof that Krejcir was in fact sick with cancer.

According to Krejcir’s attorney Eddie Claasen: “On the evidence available to us and in the manner we’ve worked up the case, with the expert evidence that we would have adduced in the course of the trial, we are quite confident that we would have been able to show that Mr Krejcir had cancer at the time of diagnosis by Dr Tupy, based on which he claimed against his dreaded disease cover with Liberty Life.”

And Claasen has reiterated Krejcir’s claims of victimhood, this time at the hands of O’Sullivan, who Krejcir regards as a tool of the Czech government.

“Mr Krejcir feels as if Mr O’Sullivan has some ulterior motive in engineering these charges against him and most certainly if this matter proceeded, we would most certainly have shown that there’s [sic] much facts underlying that suggestion by Mr Krejcir.”

Amid reports that the Czech government has seized his luxury villa in Prague, Krejcir has also become embroiled in an increasingly ugly – and almost certainly futile – bid to secure refugee status in South Africa. He looks drained after the NPA withdraws the fraud case against him. He doesn’t smile and his jokes sound strained.

“I’m disappointed by this… I wanted to be acquitted. I would have been acquitted”.

So instead of vindication, there is the prospect of this now-dormant case being revived.

And no promise of Krejcir getting what it seems he really wants: a court that believes his story of triumph against the dark agendas of his enemies, on that endorses his own powerful and possibly dangerous sense of victimhood. DM Photo: Radovan Krejcir, a Czech accused of fraud and murder, leaves a Johannesburg court after he was granted bail on 8 April 2011. REUTERS/Siphiwe Sibeko.