Young South Africans: the spark in the dark

Young South Africans: the spark in the dark 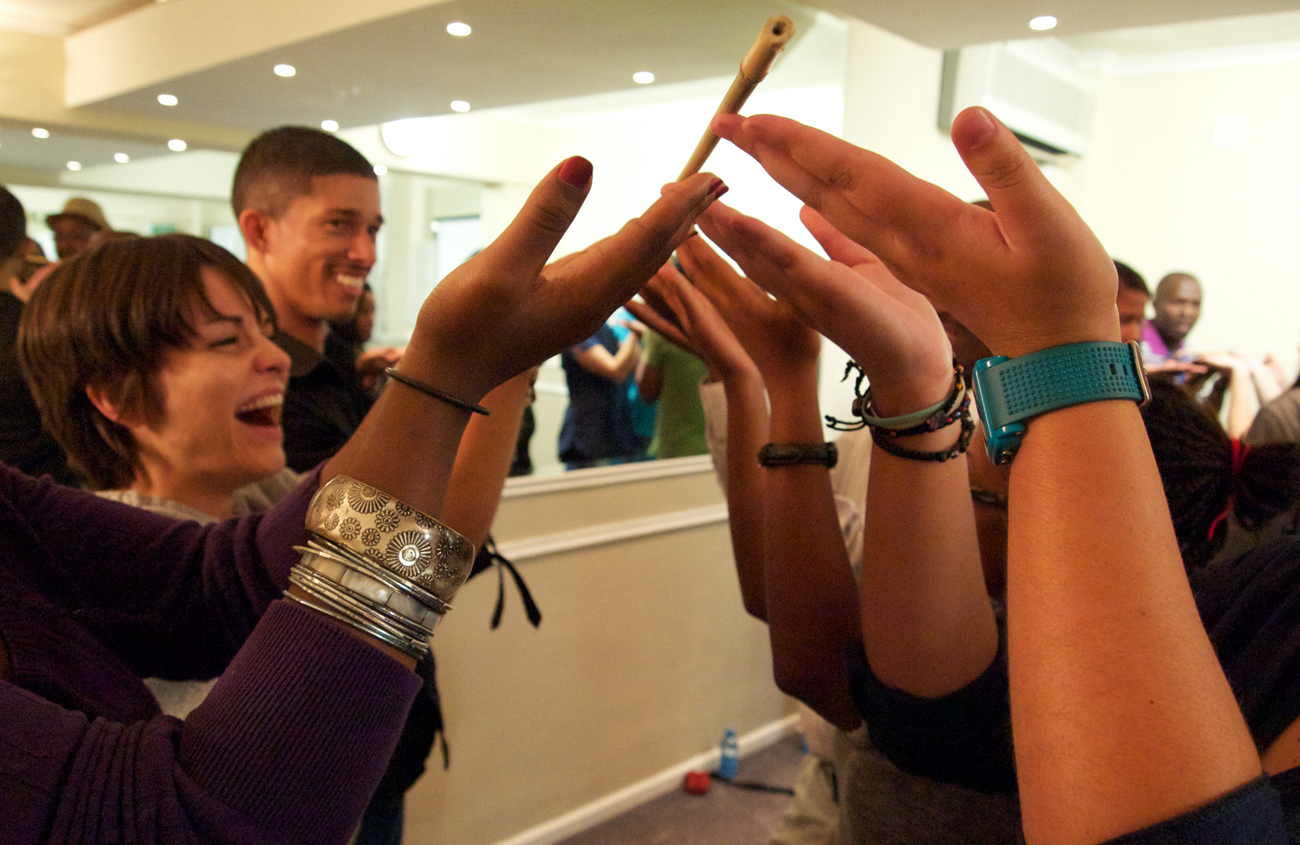 They are often viewed as the hopeless and the violent, the future unemployed. For a different narrative, GREG NICOLSON visits an organisation empowering youth to change their circumstances.

Tsakane Ngoepe lay in the tearoom, sprawled out on the carpet. She rested next to the microwave as one might next to a hearth, its drone mixed with the crack of cooking popcorn. Before long, TK, as she’s known, was napping.

The 18-year-old had spent a weekend leading and contributing to training activities for the youth development organisation Enke: Make Your Mark. Sessions ended at 23:30 the previous night before she sat through an interview until 1:00 and studied in her hotel room until 4:00 for a statistics test. “Have you ever tried holding your eyelids open to stay awake?” she asked the previous day. “It doesn’t work,” she laughed.

TK was one of six presenters who arrived at a hotel in Cape Town on a weekend in March to teach 27 university-aged students how to be facilitators. In Nikes, tights and a knit cardigan, slim and with braids down her back, she looked like the students she was meant to be training and knew some of them from the University of Cape Town, where she studies actuarial sciences.

After being dropped off by their parents or getting transport from varsity, the students milled in the hotel foyer before they were plunged into a get-to-know-you exercise. From here, they would be called facilitators.

“The theory of Enke is really simple,” said Philippa Wheaton, the organisation’s co-founder and executive director. “We want to connect. We want to equip. We want to inspire.”

The weekend was one of a series of steps leading to forums in Johannesburg and Cape Town, where 125 grade 11 students from across the country will spend a week learning leadership skills to address challenges in their communities.

In groups, the facilitators started by listing personal thoughts. “It’s hard to start but when someone does it’s much easier and you realise you have similar hopes, fears and dreams,” said one. They lived, ate and trained together, building an environment of trust. Each night the Enke team and presenters discussed the day and unloaded some of the weight they amassed.

“If any of them or you are looking to me for support, it’s going to fail,” said Wheaton as the team sat on the floor with their eyes focused. “When they start to look to each other for support, that’s when it gets really powerful.”

The facilitators were from UCT and the University of Western Cape and were hardly the youth Cosatu general secretary Zwelinzima Vavi says is surrounding Johannesburg in a “ring of fire” or ANC treasurer-general Mathew Phosa fears will lead South Africa’s Arab Spring.

“Thousands of South Africans feel marginalised and ignored, living in slum shacks, collecting water from taps in the street, even having to use bucket toilets. This has led to a growing number of service delivery protests, to demand houses, running water, tarred roads, schools, clinics and all the other basic necessities for civilised life,” said Vavi, warning that if youth don’t see more opportunities, SA risked an uprising similar to those in Egypt, Tunisia and Libya.

The closest thing to a protest at Enke came when the bowl of popcorn was passed around the circle. It was finished when the presenters deliberately took more than their share. Kingsley, with popcorn heaped into his shirt, was accused of being willfully greedy but it led to a discussion on the individual’s role in the equitable distribution of wealth and resources. From sleeping arrangements to meals, each activity had a purpose. TK attended the first Enke: Make Your Mark forum as a grade 11 student and has been involved with the organisation ever since. She was selected by her school in Dendron, Limpopo, to attend in 2009 but was almost sent home after “the incident”. On a bus back to the hostel the grade 11s were playing spin the pin – there was no bottle – and she kissed another delegate. Wheaton, with strict rules on relationships, quizzed her but decided she could stay.

When TK returned to Limpopo her principal had been contacted and called the 15-year-old into his office. He didn’t yell nor was she forced to apologise on her knees, as she’d expected. “How could you do this to me?” he asked. She couldn’t understand why he took it personally but later realised. “This person saw something in me that is bigger than I thought,” she said, holding her hand to her chest. “I felt I have that potential that he sees and I want to dig in and I want that to come out.” It was the potential to be a leader.

She started school young, skipped a grade and was among the top students, but TK wasn’t comfortable as a leader – until 2009 when she listened as prominent speakers addressed the delegates. Inspired by their stories, she asked, “Why not me?”

Delegates at Enke are required to plan a community action project they can implement when they leave the forum. When she was elected on to the student council, she and a friend, Maja Morukhuladi, who was at Enke alongside her in 2009 and is also still involved, turned their attention to improving their school’s pass rate from grade 11 to matric. It was standard for students to drop out or move high schools for their final year as only 76% qualified for matric. The student council became responsible for the pass rates and TK and Maja were determined it would rise.

They started an “each one teach one” course. They looked at their notes on how to design a community action programme and listed the problem subjects – science, accounting and mathematics. They asked teachers where students were having trouble and asked classmates who excelled in those areas and had the ability to break the problems down to teach their peers. Their principal gave them full responsibility so TK and Maja had to convince other students to volunteer their time and receive extra help.

During their mid-year test, about 70% of the grade 11s passed. After the tutoring programme was implemented, 97.6% of students qualified to write matric. “It was very big for us, like, ‘Oh my frickin’ word,’” said TK. Her whole class passed matric and TK graduated as Limpopo’s top student in 2010. The programme still continues.

Over lunch, Wheaton, who was asked to address the graduating class for Enke’s role in developing the leaders, said the government is still responsible for addressing many of the problems that daunt SA’s youth. “But how governments act reflect how the citizens act. If we can actually start from the ground up and inculcate a culture of being proactive and taking action, not sitting back and waiting for someone else – if that starts at the bottom – then it will work its way up.

“These individuals are in school but very soon we’ll start to see our first alumni enter the workplace, to start their own businesses… When they get into positions of power, even if it’s only power within, for example within their family or within their community, or as CEOs of a company, or in government, they’re going to have a very different mentality. So if we can start to create a mind shift that goes beyond ‘I’m going to wait for somebody else’ to, ‘I’m going to do it myself’, then it’s going to change the way the country operates.”

About 70% of the country’s unemployed are between the ages of 15 and 34. The National Planning Commission says “about 60% of an entire generation could live their lives without ever holding a formal job. This time bomb is of the greatest risk to social stability in South Africa”.

For some of the participants at Enke, that narrative is all they hear about their generation. They’re told they’ll never get in to university, never land a job and won’t be able to solve the problems caused by their parents and grandparents. But over the weekend they’re encouraged to understand the different issues facing communities across the country and become leaders or social entrepreneurs.

TK took a moment before offering her opinion on the country’s youth. “There are things that are definitely quite concerning, especially politically, but I see a generation of young people, people that I’ve met in my life, people that I’ve read about, people that I’ve seen, people who are phenomenal, who are doing phenomenal things, who are perpetuating this idea of, ‘Let’s not wait. Let’s do something’,” she said.

“When there’s a little light, it overcomes the darkness, no matter how little it is. When you light a match in a big room, it’s still going to light. It doesn’t matter how much  darkness there is. That little light makes a huge difference.”

Note: The author attributes a dollop of his scant success to participating in the Enke: Make Your Mark forum in 2009. DM