The ANC looks in the mirror, sees its war with itself

The ANC looks in the mirror, sees its war with itself 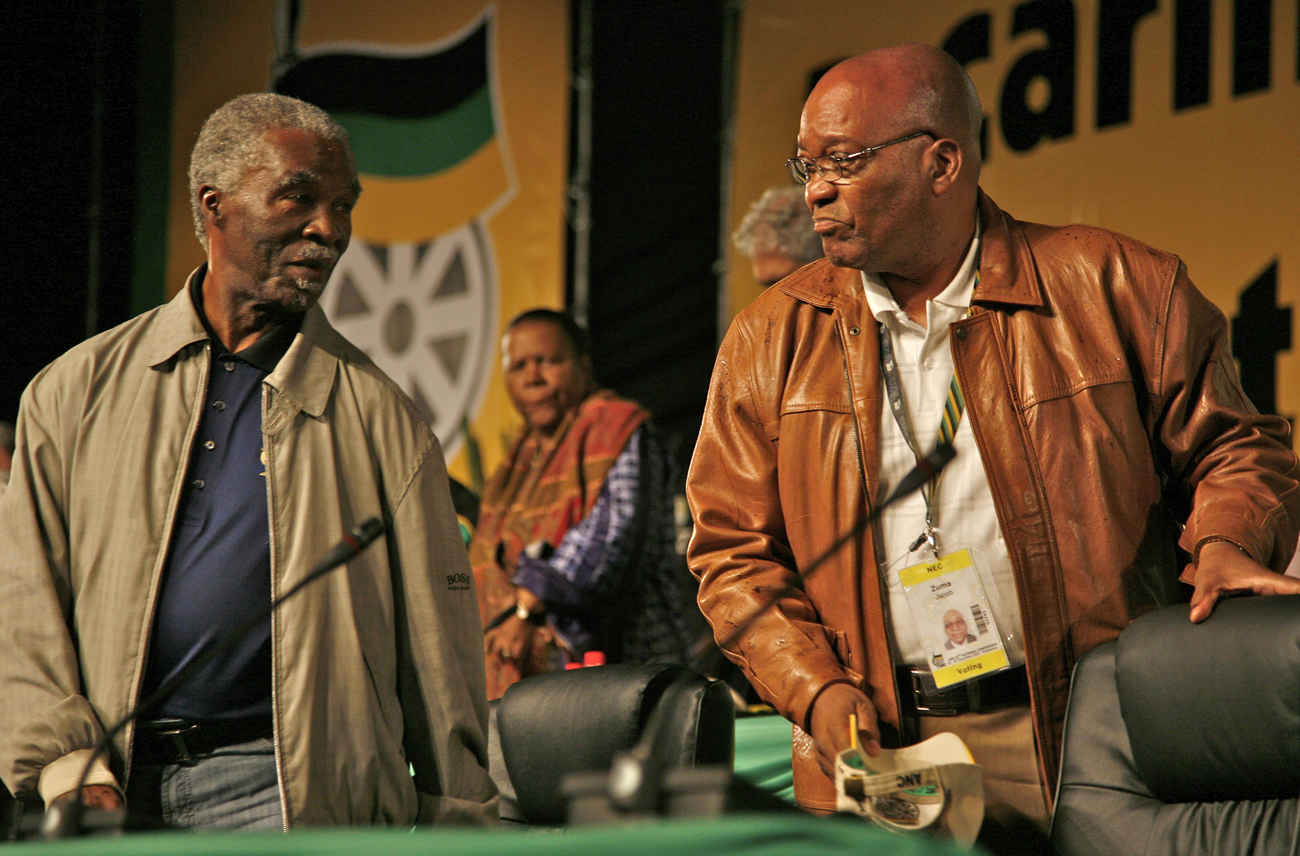 It seems like a sound and flawless system for choosing political leaders has yet to be developed. While the extremes of father-to-son succession in North Korea and the US’s electoral college system make a mockery of the citizenry, ours  of Westminster-style proportional representation has its relative merits. South Africa’s big headache right now, however, is the absurd way the ruling party chooses its leaders. By RANJENI MUNUSAMY.

Until the ANC’s 51st national conference in Stellenbosch in 2002, there was still a sense of romanticism around ANC succession. The ANC membership was confident that it had an array of gallant leaders who distinguished themselves during the liberation struggle – either in exile, in Umkhonto  we Sizwe or through the United Democratic Front. Although the senior officials positions were uncontested at the Stellenbosch conference, the tensions between Thabo Mbeki and Jacob Zuma became apparent in the lead-up to that meeting.

From then on, contestation for positions has gripped – and crippled – the ANC. While the leadership hoped that the vicious factional battles during the Polokwane showdown, and the subsequent Cope breakaway, would eventually wind down, it instead set a dangerous precedent. Intimidation, buying of votes, lobbying, character assassination and even political hits are now hallmarks of campaigning in leadership structures.

The approach of the Mangaung conference this December has poisoned the atmosphere in ANC and Alliance structures. When Luthuli House is at war with itself, it has severe repercussions at Cosatu House – home to the trade union federation and the South African Communist Party. The coincidence this year of elective conferences of all three organisations means factional battles over leadership is causing further tremors throughout the tripartite alliance.

Rivalries in the ANC also take a heavy toll on the functioning and relationships in government, parastatals and the business sector. And, as exhibited this week, as soon as the ructions at Luthuli House intensify, the SABC – the country’s most extensive communications platform and therefore a primary medium for the ANC’s constituency – starts convulsing from the weight of political pressure. Ordinary citizens become frustrated and despondent that these factional battles take precedence over social delivery and effective governance.

Part of the reason why the ANC leadership is unable to contain these problems is the backward and undemocratic way it deals with succession. The ANC has up to now insisted on retaining the outdated system it used to choose leaders before it became the governing party – where no open campaigning and lobbying was allowed and senior positions were decided mainly through consensus.

Over time, the nexus of money and power has made senior ANC positions highly influential and lucrative, and therefore heavy contestation cannot be circumvented, no matter how covert it is. With greed and disparate financial interests pervading every layer of the organisation, consensus on any issue, let alone leadership, is impossible to achieve.

Over the past 10 years, the erosion of the ANC’s proud and noble traditions as a result of this contestation has been nothing short of tragic. It would be easy to blame the desecration of the ANC’s resplendent history on the travails of Zuma and Julius Malema but, in truth, the selfless cadre who put the interests of the organisation and the liberation struggle above his or her own life no longer exists. Affluence, social status and personal advancement are now the greatest aspirations among ANC leaders, rather than the social and economic development of the country.

To the ANC’s credit, it has now decided to admit the problem and acknowledge what it calls “cancerous attempts at transforming the ANC” in its policy conference discussion document on organisational renewal.

“The political life of the organisation revolves around permanent internal strife and factional battles for power. This is a silent retreat from the mass line to palace politics of factionalism and perpetual infighting. The internal strife revolves around contestation for power and state resources, rather than differences on how to implement the policies of the movement. This situation has shifted the focus of the cadres and members of the movement away from societal concerns and people’s aspirations. These circumstances have produced a new type of ANC leader and member who sees ill-discipline, divisions, factionalism and infighting as normal practices and necessary forms of political survival. Drastic measures and consistent action against these negative tendencies are necessary to root out anarchy and decay.”

At the June policy conference, the party will consider a range of reforms to strengthen its electoral and nominations processes. According to the renewal discussion document, the party wants to “standardise electoral rules and other guidelines for conferences, so that the organisation sets the terms of debate for conferences, rather than individual agendas as played out in informal processes and in the media”.

It also wants to set the “broad criteria for leadership into our electoral rules to ensure political discussions on the suitable candidates for nominations” and develop guidelines on lobbying, with structures to enforce it.

According to Business Day, the ANC is looking to democratise its candidate selection process by subjecting those nominated for positions to a rigorous screening process that officials have likened to US-style primaries. Those nominated for various positions would be grilled by party members on their experience, leadership skills and capacity, says Gauteng secretary David Makhura.

While the US primaries are Hollywood-styled with their multi-billion dollar advertising campaigns, super PACs and mudslinging among candidates, any form of modernisation and transparency by the ANC would be welcome. It remains to be seen what kind of “screening processes” the policy conference will opt for and how this would be practically implemented. For an organisation so secretive in its electoral processes to suddenly swing towards openness and transparent campaigning is rather ambitious, and unlikely.

However, the discussion document proposes the following “do’s and positive practices” to be explored:

Somehow live televised debates between Candidate Zuma and Candidate Kgalema Motlanthe on their respective visions and plans of action seem rather far-fetched. But now that the ANC has admitted how obsolete and fraught its electoral system is and is making an attempt to change it, perhaps its 54th national conference in 2017 will see the rollout of a modern and dynamic campaign, one that will hopefully end the equivalent of buyer’s remorse in the selection of presidential candidates. DM Photo: The manner in which the ANC chooses its leaders has to change. DAILY MAVERICK/Greg Marinovich.