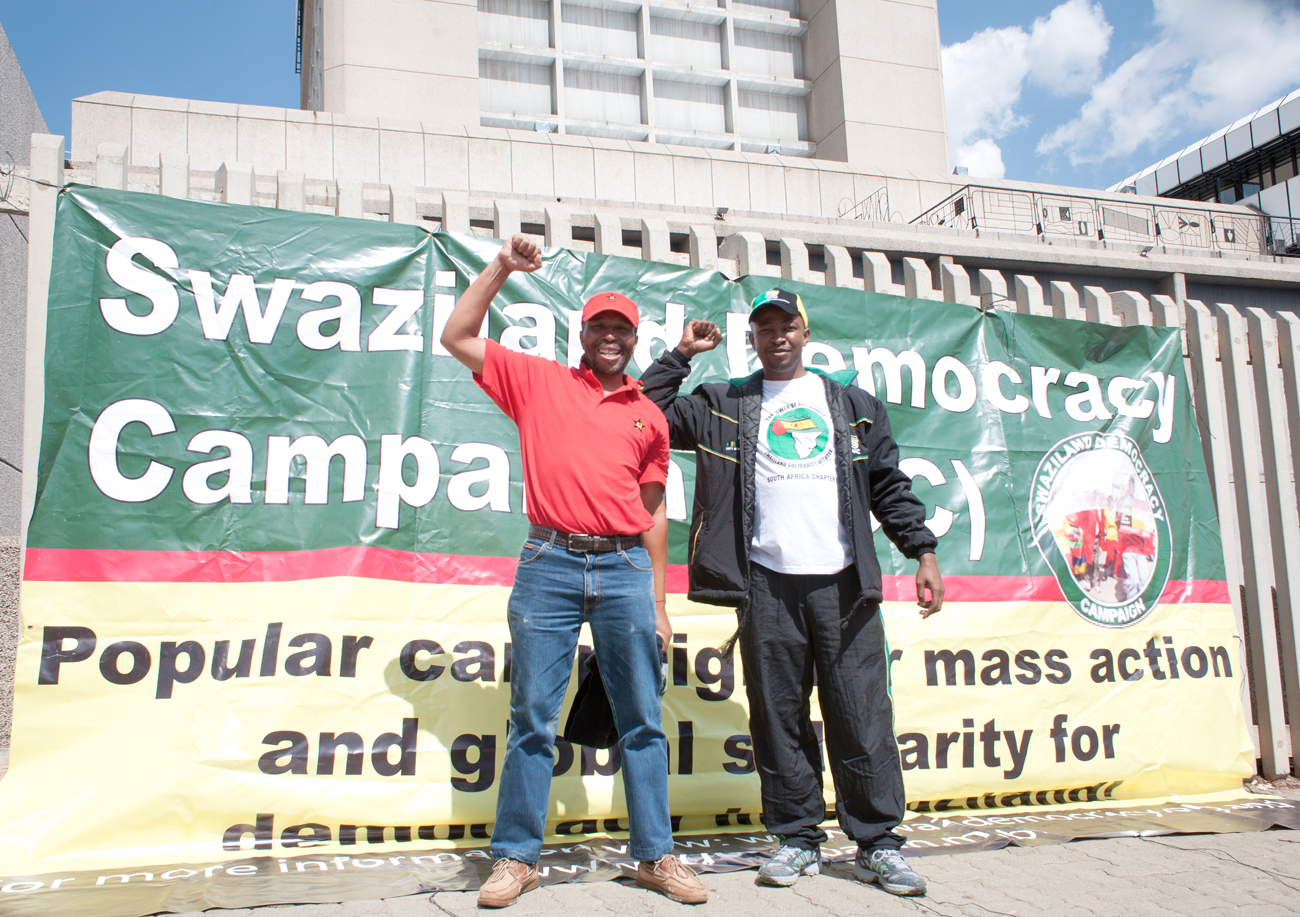 Once again, it’s the anniversary of the Swazi constitution, which allows King Mswati III to rule by decree. Protests are gathering momentum and 15 unionists affiliated to the Trade Union Congress of Swaziland  have been arrested. South African unions have spoken out in solidarity with the protestors. The government has not. By GREG NICOLSON.

The trade unionists were arrested in the capital, Mbabane, while gathering to march during the planned four days of demonstrations. A source linked to the group’s leadership and who wants to remain anonymous for fear of government retaliation, said it’s unclear how many people have been detained because police confiscated cellphones but estimated the figure as being in the hundreds. Unionists confirmed 15 members were detained in the morning to prevent leadership form taking part in the march. They were later released.

Police blocked roads into Swaziland’s main cities and detained those suspected of planning to attend protests. The source inside Swaziland said there was a strong police presence on the streets as well as heavily armed soldiers. They were described as “brutal” and interrogated, threatened, intimidated and insulted detainees. Two e.tv journalists were detained briefly outside Mbabane on Wednesday.

Before the planned four days of protest the government was granted a court order prohibiting scheduled marches. “We shall deal with all those who will want to defy the law. The Industrial Court stopped any form of protests and we therefore do not expect any protest,” said government spokesman Percy Simelane in Africa Review.

The Swazi government  also deregistered the recently formed Tucoswa, a merger between the influential Swaziland Federation of Trade Unions, the Swaziland Federation of Labour and the Swaziland National Association of Teachers. The government said its registration process was flawed, despite being approved in January. Tucoswa has threatened to boycott the 2013 elections, demanding direct representation, universal suffrage and institutions that uphold political rights.

Vincent Dlamini from Tucoswa explained the current protests: “There are no checks and balances in our current system. The king appoints and fires whoever he wants and the people have no say. We would prefer a system where the monarch is a ceremonial figurehead and an elected prime minister would wield the real power.”

Pro-democracy protests are becoming an annual April affair in Swaziland. They erupted violently in the tiny southern African country on 12 April 2011, sparking talk of an “Arab Spring”. Roadblocks were erected, security forces deployed, activists arrested, and rubber bullets and teargas were used to dispel protesters. The king reportedly even wanted the South African Hawks to monitor anti-government exiles.

Next door, the ANC was compelled to respond. Without mincing its words, it said: “The use of security forces to quell any form of political dissent and failure to address legitimate concerns of citizens, can only lead to the worsening of relations between government and civilians, something that does not augur well for economic stability.”

But neither the ANC nor the government has made a comment on the current protests and the Department of International Relations and Co-operative Governance failed to respond to questions from Daily Maverick.

A handful of protesters, mainly South African unionists, gathered outside the Swazi consulate in Johannesburg on Thursday to submit a memorandum and a gift for the upcoming 44th birthday of Mswati. They offered a box containing reports of human rights abuses in the country. Shortly after arriving at the consulate in Braamfontein, the small group was evicted by security and  left to erect its banners on the street.

Analysing SA’s stance on international events is hazardous at the best of times, but there are murmurs that the ANC is cautious of criticising its neighbour before the election of a new African Union head in June. Home Affairs minister Nkosazana Dlamini-Zuma missed out on the post in January, but the government hopes it can muster the necessary votes at the next AU summit in Malawi and boost its influence on the continent.

However, even if the ANC does condemn Mswati, the powers are stacked against the activists. Dimpho Motsemai from the Institute for Security Studies explains: “In the absence of a significant game changer, the immediate aftermath of April protests may be limited to boosting the movement’s awareness campaign and ‘monarchy-naming and shaming’.

“Like previous years, however, the monarchy administration will possibly counter this, keeping the masses depoliticised and unorganised through a combination of measures including surveillance, media control, intimidation and manipulation of cultures and traditions.”

Despite the police response and failure of past action, activists have said they remain committed to the next two days of protest. Church services have been set for Saturday and reportedly the government has extended its intimidation to religious leaders. With neither pro-democracy groups nor the government backing down, it could be the most brutal conflict yet. DM Photo: Stanley Molepo and Mlungisi Makhanya protest opposite the Swaziland consulate in Johannesburg after a small group sympathetic to activists in Swaziland were evicted from the building by security on Thursday. DAILY MAVERICK/Greg Nicolson.