In search of Joburg’s condemned buildings 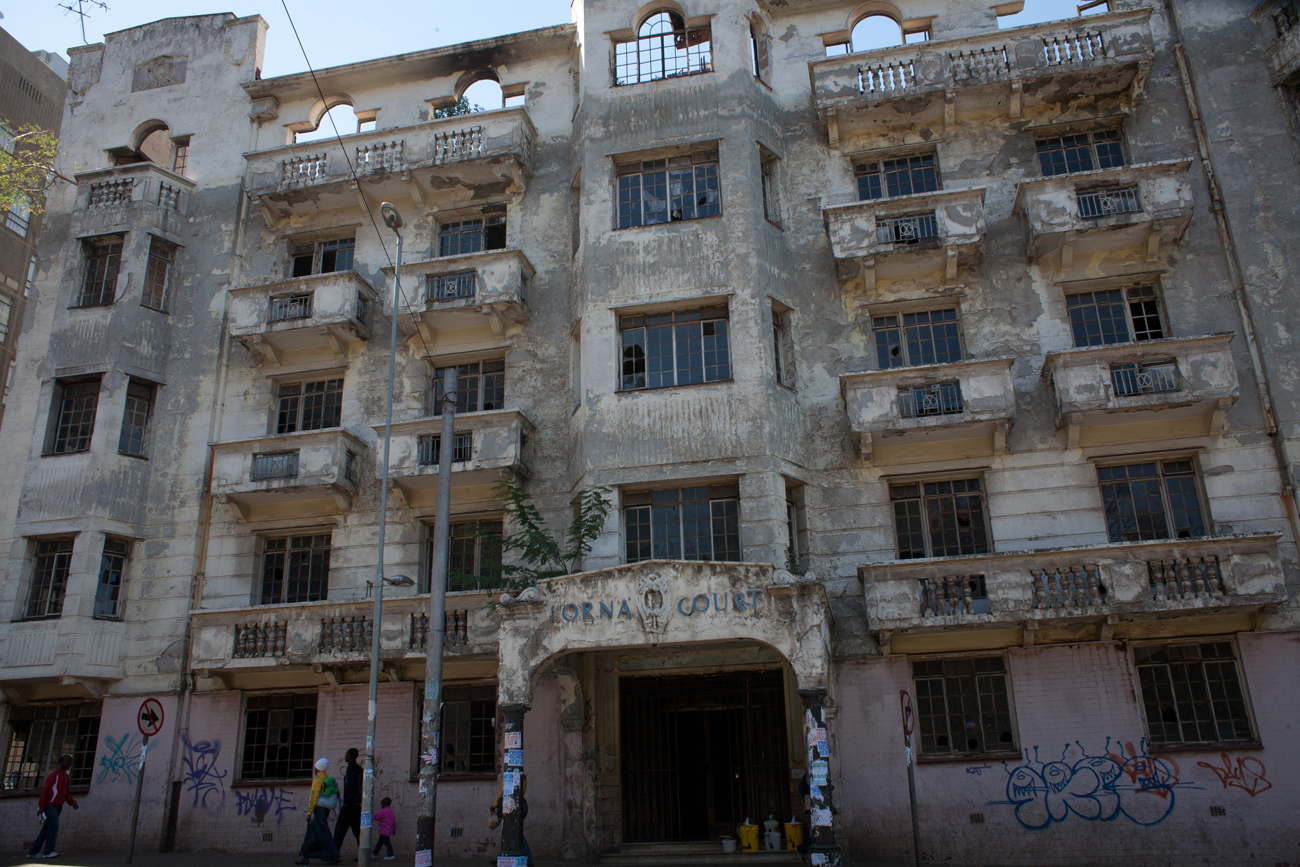 After three people were crushed in a Johannesburg building last week and the city committed to clearing condemned properties, GREG NICOLSON went in search of Jozi’s best dilapidated architecture. It’s a potent symbol for a voyeur of change.

On the corner of Twist and Wolmarans Streets in Joubert Park, Johannesburg, sits Lorna Court. Its facade has faded and the paint’s chipped. The doors on the balcony terraces have come off their hinges and the windows are broken.

Inside, debris covers the floor like a carpet and each room, bar the security guard’s, is blackened by smoke. On the fifth floor, the roof has caved in and weeds grow in rooms overlooking the park.

Seven years ago, says the guard who lived in the building, a man was fighting with his wife and used a gas funnel to set her alight. The building went with her and has been condemned ever since.

It’s a telling example of the city’s neglected beauty. After another Johannesburg building caved in on three people in search of scrap metal last week, I set out to catalogue some of the city’s most beautiful but condemned architecture.

Lorna Court, a block of apartments encapsulating all Johannesburg’s supposed potential to become the next Manhattan, stands for many as a symbol of the City of Gold’s decline.

Literary presenter Victor Dlamini said: “No one will ever know for sure what precipitated this exodus from this once hallowed city, but overnight, once prestigious office blocks and gleaming restaurants were left vacant, haunted by their quick fall from glory. Parking spaces that had once been reserved for shiny chauffeur-driven Rolls-Royces were left to rot and decay as the offices were abandoned. The rush to flee the city led to a plethora of suburban office and residential developments in places like Sandton and Fourways. Photo: Inside Lorna Court, apartments have been gutted by fire and weeds grow on the top floor. It remains a symbol of the city’s potential for rejuvenation. DAILY MAVERICK/Greg Nicolson.

Buildings across the city serve  as testament to the city’s glamorous past and current neglect. Opposite the Gauteng Legislature stands  the imposing Rissik Street Post Office, built in 1897 and destroyed by a blaze in 2009. Behind a street fountain, the building’s gutted insides are visible through missing windows that climb towards the timeless clock tower. The building, unlike many others in Joburg, is undergoing developments.

Take a short walk down Rissik and the ground floor of apartment and office blocks have been concreted closed, with an occasional colonial building title hanging over a door, offering a glimpse of a half-destroyed building. On the brick wall of one condemned building, a Johannesburg Art City billboard towers over the street, next to floors of smashed windows.

After many of the moneyed residents fled, a list of opportunist developers, inspired officials and nostalgic community groups tried to “rejuvenate” what has always been and still remains a contested African city of capital and culture, a mimic of its European counterparts while at the same time a hub in the continent’s production.

In his state-of- the-city address, Johannesburg mayor Parks Tau lauded the new Maboneng precinct as a sign that the inner city is opening itself to those excluded after its “decline”. Optimists also point to Braamfontein, where developers have focused on delivering affordable accommodation to students and young professionals. The streets are generally clean and the areas developed by South Point offer a comfortable entry to the city for those who normally tread in the suburbs.

Heading east down Smit Street, a Tudor-style brick home stands on a corner before the Hillbrow Community Health Centre. Circled by overgrowing grass, it’s one of the few standalone homes so close to town. Tiles on part of the roof are missing and cracks run through the once-solid brick structure. On the footpath, behind a fence shielding the house from pedestrians, three men sit sniffing glue. Two begin to fight. Photo: A Tudor-style brick home and other inner-city shops and buildings in decline. DAILY MAVERICK/Greg Nicolson.

The lone house seems a symbol of change and contest. It’s a walk away from the lauded Braamfontein developments, across a bridge from the streets between Bree and Noord taxi ranks (dirty but not dilapidated), down the road from Hillbrow and a short drive from the Maboneng precinct. It’s an obvious choice for a smart developer, a potent symbol for a voyeur of change. DM

Photo: The Lorna Court building in Johannesburg was built in the 1930s but has been condemned since a fire seven years ago. It’s said that it’s owners had no insurance but are not willing to sell the site. DAILY MAVERICK/Greg Nicolson.