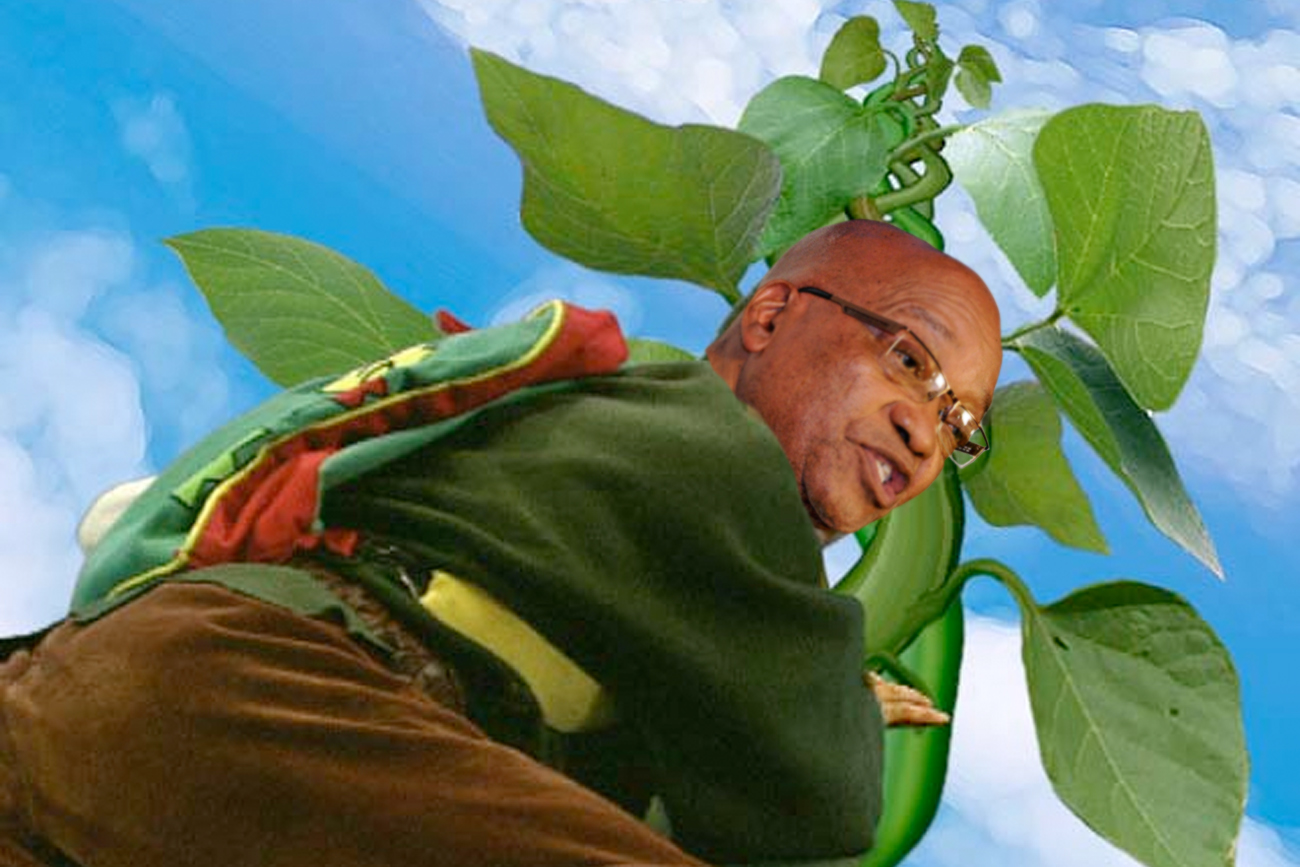 A salutary story of how a young man climbs a beanstalk and finds untold wealth. A South African folktale, as told by CHRIS GIBBONS.

Once upon a time, long ago, in a land far, far away, there lived a little boy called Jacob. His parents, Mr and Mrs Zuma, were poor and there was seldom enough to eat in their house. Little Jacob knew this and always looked for ways to help out. He would help his mother with her chores and then, when those were finished, he would go outside to help his father in the garden and the fields. He was a dutiful son and his parents were proud of him.

One day, in a corner of the Zuma garden, little Jacob noticed a giant beanstalk. Its thick green trunk reached all the way up to the sky. That’s funny, he thought to himself, it must have grown very quickly because I am sure it was not there yesterday. Well, of course, it had grown quickly because, dear reader, this is a fairy tale and that’s what beanstalks do in fairy tales. But little Jacob wasn’t to know this. Instead, he craned his neck to see if he could see just how far the beanstalk reached but, try as he might, it was impossible. In, fact, it seemed to Jacob that the very end of the beanstalk disappeared right into the clouds.

He paused for just a moment and then seized hold of some of the beanstalk’s tendrils. He tugged but they were firm. His mind was made up. Little Jacob would climb the beanstalk, right to the very top, because – who knows? – there might be something useful at the top that he could bring down for his father and mother. He was sure they would be pleased with him if he did, especially if it turned out to be food.

So he set off, up the huge beanstalk. Up and up he went, hand over hand, pausing every so often to let his tired muscles rest. Was there no end to this incredible plant, he wondered? Far beneath him, he could just make out his parents’ house.

Suddenly his head popped out through a cloud and he see could a wide flat plain all around him. He was able to let go of the beanstalk and step on to firm ground. But that wasn’t what caught his attention. What really caused little Jacob to blink and stare was the giants. All around him, in every direction, were giants – some bigger than others, some uglier than others, but all very fat and slow-moving. And beside each giant was a big, big pile of money. This was very curious indeed, thought little Jacob. Because his family was poor, he was intrigued by the money.

He walked cautiously over to the nearest giant. He was determined to find out more so he took a deep breath and, in his most polite voice, asked a question.

“Excuse me, Mr Giant. Could you tell me where I am, please?”

The giant, who seemed to be half-asleep, turned a baleful eye to little Jacob.

“Why, yes, young man. You are in South Africa.”

“I see,” said little Jacob, although he didn’t really because he had never heard of South Africa. “And could you tell me, please, who you are? Well, in fact who all of these giants are – and why you each have these huge piles of money beside you?”

“I don’t know that it’s any of your business,” said the giant, “but you are a polite little boy, so I’ll tell you. We are a tribe of giants called the Corporates. The Corporates of South Africa is who we are. And these piles of money are the excess profits left over from our businesses. We have no idea what to do with all this money, so we just sit on it.”

Little Jacob found the idea of just sitting on money and not using it productively to be very strange indeed. He knew for sure that his mother or father would have plenty of very good ideas as to how the money could be put to work.

“Tell me, Mr Giant, has the tribe of Corporate South Africa ever counted all the piles of money together? It must make a fabulous sum?”

“Oh, yes, of course we have counted it,” replied the giant. “Counting it is about the only thing we can think of. In fact, we’ve counted it just recently and it comes to R520.5 billion.”

Little Jacob forgot his manners for a moment and whistled softly.

“Well, thank you, Mr Giant, thank you very much – that’s very interesting. And you really don’t know what to do with it? You have no exciting investment prospects? No infrastructure projects? No offshore schemes in other countries?”

Jacob hadn’t told the giant that his mother had been reading him bedtime stories from an economics textbook, so he understood these things.

“No, we can’t think of a single thing,” the giant replied. “The investment climate is dismal, there’s too much government red tape, the money market rates are at an all-time low and we’re certainly not going to return it to shareholders. It’s all very depressing!”

Jacob thanked the giant again, turned on his heel and ran back to the hole in the cloud where he could just see the beanstalk. He started to climb down as fast as he could, and, as he did so, he grabbed a fistful of beans. He was at the bottom in a flash and, as soon as he had caught his breath, he started calling for all his friends.

Jacob’s friends surrounded him in moments and, as they did so, he gave each one a bean from the giant beanstalk.

“Quick now, go and plant it, and when it’s grown, which it will do very quickly, up you climb and we’ll all meet at the top. Because I’ve had this wonderful idea that will bring wealth and prosperity to our village. It’s called prescribed assets and it’s only fair, because those silly old corporate giants are sitting on all that fabulous wealth and not using it, and we’re poor and we could think of many, many different ways of using it, so we’ll just take some of it away from them!”

Little Jacob’s friends all nodded their agreement and ran off excitedly to plant their magic beans.

The story of little Jacob and the beanstalk has a moral. If you’re a South African corporate giant, sitting on untold wealth, use it or lose it and don’t draw attention to it. Also remember that fairy tales have a nasty habit of not turning out the way you remember them. Photo: Jacob and the Beanstalk – a tale of our times.