Mr Gay World: less than ambivalent, more than a pretty... 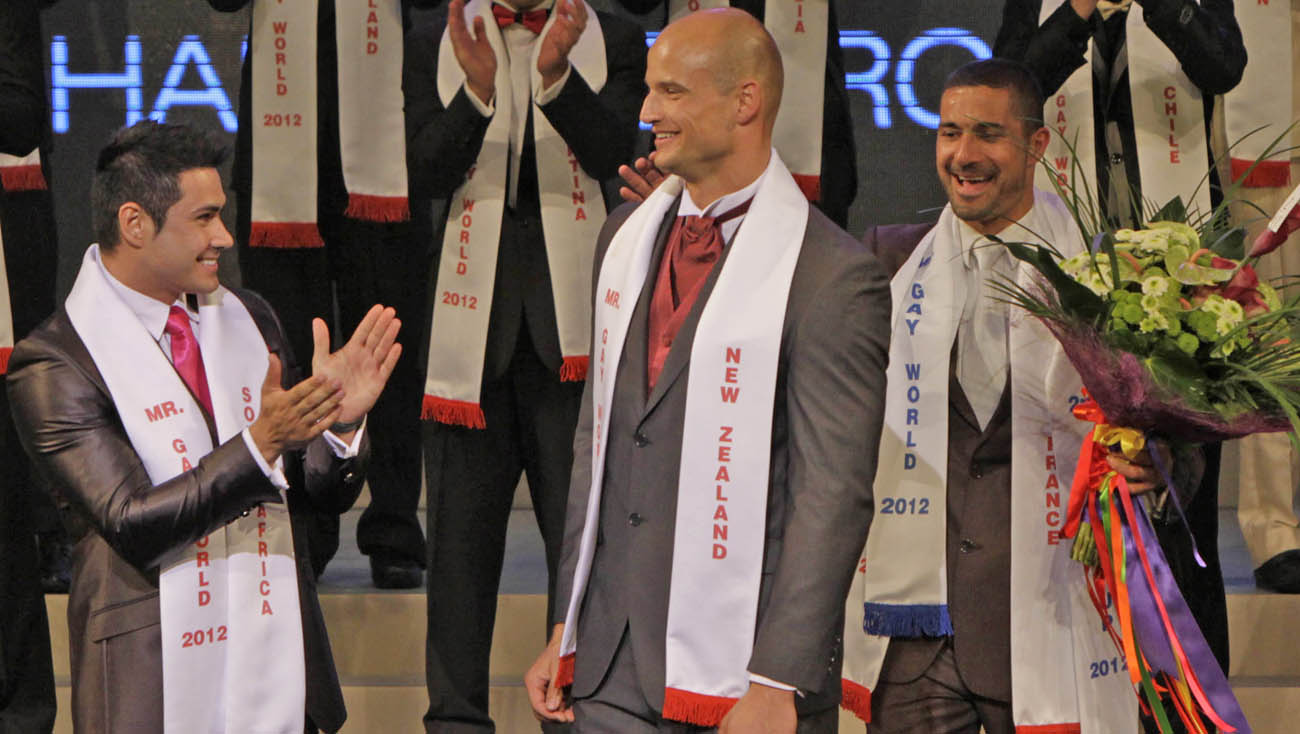 Somewhere between the worlds of Priscilla, Queen of the Desert and Philadelphia lies Mr Gay World, rank with the stench of hypocrisy, fetid with bigotry and homophobia, adrift in an ocean of ambivalence and fighting for dignity and rights. It happened in Johannesburg on Easter Sunday. By KARYN MAUGHAN.

“Same-sex marriage is a disgrace to the nation and to God. When I was growing up, [a homosexual] would not have stood in front of me. I would knock him out.”

Jacob Zuma made this comment on gay marriage in April 2009 – and apologised for it within days. But, while condemning homophobia in Malawi and Swaziland, Zuma also appointed Mogoeng Mogoeng (a man who believes homosexuality can be prayed away) as Chief Justice of the Constitutional Court.

The apparent ambivalence of Zuma stance on homosexuality is arguably illustrative of the South African gay rights contradiction: a country that was fifth in the world to legalise gay marriage, yet which struggles to stop the brutal corrective rape of lesbians and violent attacks on gays. A country that tries very hard to tolerate homosexuality, but which struggles to accept it.

Into this murkiness entered the organisers of Mr Gay World, who this year chose Johannesburg as the host city for its 2012 pageant. And, in a move that drew the wrath of the ACDP, organisers scheduled the event for Easter Sunday.

ACDP national chairwoman Jo Ann Downs didn’t hold back when she accused Mr Gay World organisers of deliberately attempting to provoke Christians by holding the event on a day she described as “the holiest of holies”.

“If they wanted to get people like us on their side, this is not the way to do it… I don’t think anybody wants to see anybody else’s human rights violated. But if they had respect for other people’s religious beliefs and behaviours, there’s probably a way where people like us, people like me would go to places like Uganda and say don’t kill people for what they’re doing. Respect their right to life.

“I don’t think Christians have shown animosity. Nobody’s picketing outside saying ‘Die homosexuals’… The second point is that Jesus very clearly said I will die for your sins, but sin no more and people are asked to move away from their sins and that’s adultery and fornication and all of that.

“So on Easter Sunday we don’t expect people who are all in adultery to rise up and say okay, we’re going to have a Mr Adultery competition.”

The comments prompted deputy minister of science Derek Hanekom to tweet a single word: “ugh”. And organisers credited the ACDP with singlehandedly ensuring tickets for Mr Gay World Johannesburg were sold out within days of the party’s remarks hitting the headlines.

It was the first time an African city had hosted the event, and the first time black African men had participated in the competition. But those firsts did not come without consequences. The Mr Gay Zimbabwe contestant was forced to pull out after police allegedly threatened his family. He was also told that his mother would be fired if he represented his country at the pageant.

Mr Gay World Ethiopia Robel Hailu faces criminal prosecution in his home country for openly declaring his homosexuality. He has none of the polish of a practiced pageant participant and, when I asked him if he ever thought twice about entering Mr Gay World, he made no effort to disguise his anxiety.

“Yes… Even when I entered, I thought maybe this wasn’t a good idea. It’s difficult, very difficult to be gay in Ethiopia. People beat us, they want to kill us. I want to show the people what kind of people we are. That’s why I am here.”

But Hailu never had the opportunity to publicly express his experiences of state-sanctioned homophobia. He and Mr Gay World Namibia Wendelinus Hamutenya didn’t even make it into the top 10 of the 22 contestant competition. And, if the traditional glamour logic of the beauty pageant is used as a basis for evaluation, it wasn’t hard to see why.

Neither of the two had sponsors, appearing on stage in national costumes that they had clearly bought and created themselves. They were also uncomfortable on stage, walking with the awkward posture of men who – unlike the white-teethed and tanned pageant professionals with whom they shared the stage – had never been taught how to walk, pose and smile at the same time.

“It would have been nice for them to make it into the top five, but they clearly didn’t have support from their countries, you can see no support for them in the audience.”

Mr Gay World organiser Tore Aashaim was also quick to counter criticism that the absence of black Africans from the competition’s finalists effectively reinforced the marginalisation of homosexuals on the continent.

That may a conveniently glib response to a difficult question or it may be a sincere and somewhat naïve expression of optimism. And it must be recognised Mr Gay World is in a strange and difficult position. It’s a pageant that replicates the heterosexual quest for a beautiful girl with perfect teeth and the ability to answer any question posed to her with the words “world peace”. At its worst, Mr Gay World is a cheesy attempt to objectify beautiful gay men in the same way that women have been objectified for decades.

But, at best, it could be something far more powerful: an opportunity for the gay community to find a meaningful voice. Not just a pretty face. DM