Moria: The road to Zion

Moria: The road to Zion 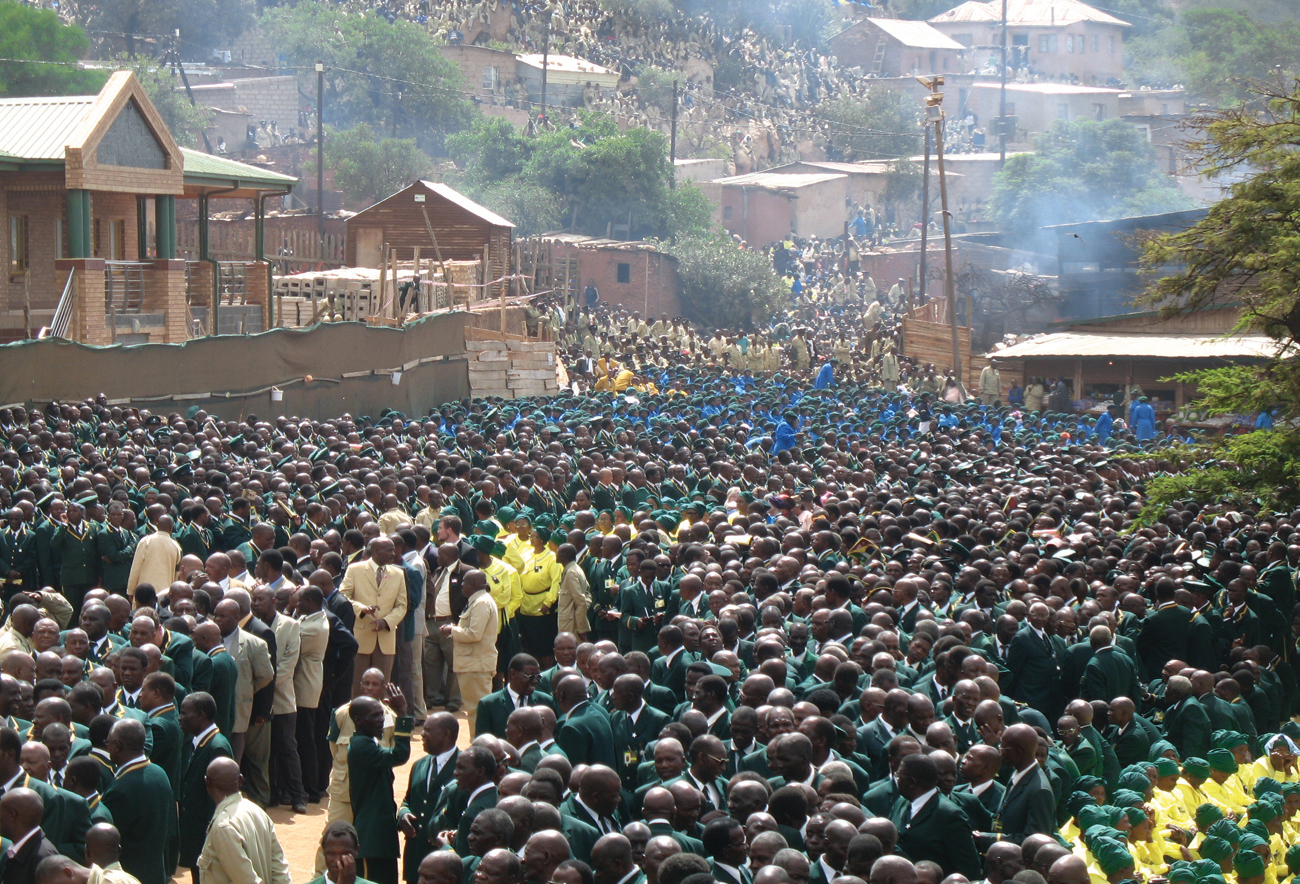 Members of the Zion Christian Church (ZCC) made their annual Easter pilgrimage to the Limpopo town of Moria this weekend to hear their prophet deliver his Sunday service. GREG NICOLSON went along.

Travelling up the R71 in Limpopo, through hills and around the final bend, a fleet of buses and taxis sat in a valley next to a small village that climbed the mountain. There were so many vehicles it looked like the country was under attack and citizens had descended on the area for refuge. Behind a fence that stretches for kilometres, buses parked each other in right across the valley. Tents had been erected on any remaining piece of land and crowds of Zion Christian Church members walked from their resting sites towards the glowing ZCC sign perched on top of the hill.

Moria – if you’re a reader of JRR Tolkien you’ll know it as the “black chasm” in Middle-Earth where the Longbeard dwarves live in an extensive labyrinth. If you’re a reader of biblical narratives, Moriah is the mountain where Abraham was prepared to sacrifice his son, Isaac, at God’s command. If you’re a member of the ZCC, Moria is your spiritual home where the prophet Bishop Dr Barnabas Lekganyane resides and it’s the end destination of each Easter and September pilgrimage.

Inside the first gate, Moria looked like a standard village. Streams of people walked the dusty paths past the food vendors and hawkers selling religious paraphernalia. Others lay in the shade, pouring water from a large container into measuring cups to avoid dehydration in the Limpopo heat. Almost everyone was in uniform. Women wore long skirts and had their hair covered. On Saturday, some were already in the kit they’d wear to the Sunday service. The Star of David ZCC badges were ubiquitous and most men also wore the ZCC cap, khaki button-up jacket, khaki trousers and white leather boots with leather souls that protrude like a flange. It looked like a barracks for an army of desert sheriffs.

The ZCC was founded in 1910 by Engenas Lekganyane, who secured the holy site of Moria on the instruction of God. Near the site’s entrance, a gorge delves to a creek where it’s said up to 1,500 baptisms occur each day of the pilgrimage. Two young members spotted me as an outsider, not hard considering I stood out in a suit and was the only white person there.

“The prophet, our Bishop, knows you’re here,” I was told. Lekganyane is the grandson of the church’s founder and is said to possess the skills of a prophet. When he visits, I was told, it always rains. No matter where he goes or when. Once the church was called to a dry village in Botswana. It then rained day and night until the villagers had enough water. My guides explained that, although the church is heavily based on the Bible’s New Testament, it seeks to retain traditional African values and forms of worship. Men are seen as the head of the household and there are different types of worship for each gender.

The gate to Zion City Moria sits in the foothills of the mountains, a hot walk from the road, where the town’s few permanent residents live in small houses.

Men waited in a single-file line that stretched over a hillock to be processed by security for the first time. Each member I encountered was welcoming, but the ZCC is strict about who they let in. A preacher estimated that seven million members would arrive during the weekend, which seems like a gross figure. Yet every individual and car was counted at the gate and there were more people then I’d ever seen gathered before.

Security members were paranoid about cameras. As a guest, I was singled out for special treatment, bypassed the line and escorted out to get my car and park it near the church offices. Leaving my cameras and Blackberry at the gate, I was quizzed about how many pictures I’d taken inside and outside the property. None, luckily. Despite individual members being trusting and courteous, ZCC security is cautious of photos being sold to outsiders and one wouldn’t want to misstep amid the sea of members. No one was allowed a camera phone inside.

The Zion City property sits alongside the ZCC’s sister church, Saint Engenas, which has a considerably nicer gate. Saint Engenas Lekganyane split from the ZCC when his brother, Barnabas, took over after their father died. Both branches are committed to the same faith, a hint of animism and the conservative values that prompted the apartheid government to recommend the ZCC alongside the Inkatha Freedom Party as institutions to combat revolutionaries.

Members take pride in the fact that their worship focuses on singing and dancing, with few instruments. Across the mountain and down the slopes, men and women had split into their church groups, singing and dancing with their local flavour. Circles of men would launch into the air, dancing with the jumps and stomps the ZCC’s often known for. Younger men in full Scottish kit, minus the bagpipes, sang in harmony. In the background, the much-lauded brass band, each of whose songs are said to hold deep meaning, prepared for Sunday when it would lead the Bishop to the Easter service.

It was impossible to blend in. I was taken to the ZCC offices to meet a church representative, who I was told would explain the faith and try to accommodate me as a guest. Waiting in the car among a sea of devotes in uniforms, my two guides explained they had been members from birth, but being a part of the church was their choice. They spoke proudly of their prophet and committing to a life where alcohol and cigarettes are replaced by a badge and a cap. They sat in the backseat and sang their favourite hymns in harmony, taking care to explain each and ensure I wasn’t scared.

Perhaps the prophet saw I was there as a sinner, but the party didn’t last. The ZCC representative, in glasses, a tie and the tweed jacket that seems customary for all church officials, took my details and went to consult the council. My guides continued to wait, devoted to assisting me.

There were no extra spaces to see the Bishop, we were told. Outside the small hall, the army of the devout would listen to the service, translated into multiple languages, on a sound system that would rival a Michael Jackson concert. I was escorted back to the security checkpoint to collect my cameras. A sea of people who engulfed the car and extended to the horizon had to part as we crawled along the night road towards security and the answer to the question I was dreading: are you a writer?

But they were more courteous this time and I received my belongings with no fuss. My new friends wished me a safe trip and I was urged to visit Moria when it wasn’t so busy. The prophet will know when you’re coming, they said. As I drove out of the Moria gates, cars lined the R71 for kilometres, latecomers on the road to Zion. DM