Caving in to the ancient idiocy of the ‘Paleo diet’ 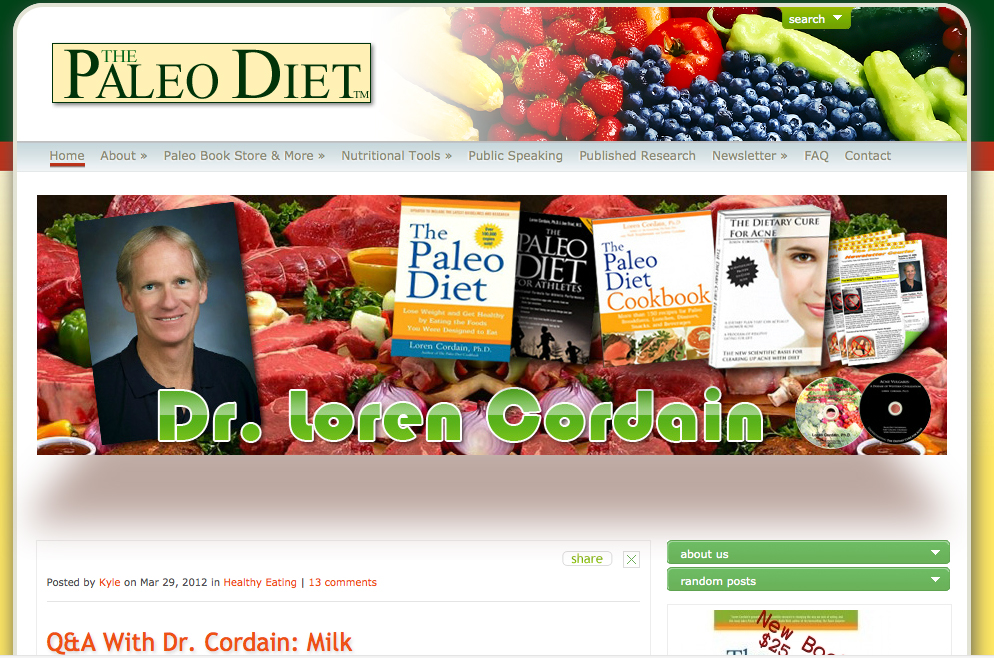 Meet “Dr.” Loren Cordain, from Colorado State University’s department of health and exercise science. He has assembled the “science” behind the paleo-diet fad, which encourages postmodern humans to eat as our caveman ancestors ate. Turns out, our forebears may have had a more sophisticated culinary repertoire than Doc Cordain and his acolytes assumed. By RICHARD POPLAK.

Let’s get this straight, Fancy American Doctor: South Africans own the caveman. Sorry, caveperson. Just west of Johannesburg, our hirsute ancestors hunted and gathered. If that historical précis sounds a tad short, count me among the plethora of caveman – um, person – specialists who are now making a pretty decent buck telling 21st century humans to eat like 20,000BC hominids.

The latest fad diet, following the Zone and other wonder treatments that shaved five kilos of butt fat off your frame for precisely eight weeks back in the mid-zeroes, the Paleo diet has a compelling myth roiling at the centre of a miasma of bullshit. Cordain’s quackery has a home on the web, you’ll be unsurprised to learn, and here’s what he has to say:

“Dr Loren Cordain demonstrates how, by eating your fill of satisfying and delicious lean meats and fish, fresh fruits, snacks, and non-starchy vegetables, you can lose weight and prevent and treat heart disease, cancer, osteoporosis, metabolic syndrome, and many other illnesses.

“The Paleo Diet is the only diet proven by nature to fight disease, provide maximum energy and keep you naturally thin, strong, and active – while enjoying every satisfying and delicious bite.”

Yeah, see, the thing about our Paleolithic ancestors is how healthy and “naturally thin” they were. They were healthy because they didn’t live long enough to get piles or diabetes – so violent were these Omega-3 and Omega-6 munching gym rats that, according to Stephen Pinker, author of TK, almost 50% of all pre-modern skeletal remains have evidence of trauma from blunt instruments or blades. And why were they “naturally thin”? Mostly because they were starving to death.

The Paleo diet is heavy on common sense – eat simple, unprocessed food that doesn’t come from Wimpy – and heavier on a nonsense interpretation of caveperson menu items. For one thing, it tub-thumps “raw food eating”, a nice way of dovetailing with another species of California self-starvation meshugas. But the thing is, new research has shown our cavefolks loved nothing more than a braai, followed by an afternoon of beating their wives and children, and killing their neighbours. Yup – South Africa hasn’t changed!

More specifically, via an Atlantic piece about cooking a million or so years a ago: “Studying thin sections of the sediment blocks under a microscope, the scientists observed lots of ashed plant remains and tiny fragments of burned bone. Further analysis of the thin sections using Fourier transform infrared microspectroscopy, which reveals molecular structure, showed that some of the bones had been heated to temperatures of around 500 degrees Celsius. Preliminary data suggest that leaves and grasses, rather than wood, fueled these ancient fires.”

Bring on the microspectroscopy! Turns out, our “naturally thin” great-great-great-great-grandparents’ great-grandparents didn’t eat raw food exclusively. The reasons for this have been exhaustively researched by actual scientists, who have come to the conclusion – based on actual data – it takes too many calories to burn through a diet of exclusively raw food, to the extent that you actually end up digesting yourself. Which is fine if you spend your days trying to stay away from a second cupcake while taking conference calls with other fat people. But not so fine if your workload includes chasing a wounded buck for a week through veld, or picking gnats out of your husband’s back hair.

It’s sort of tragic that something like the Paleo diet can still land so successfully. Quackery has always relied on a mixture of pseudo-science and common sense, and Loren Cordain and his kind are no different. It’s not their fault for peddling this nonsense. It’s our fault for swallowing it. One likes to think that our cave-ancestors knew a little better. Berries and twigs are great as a stopgap measure between famines, but there’s nothing like a flank steak to get a party moving. As my mother used to say: Everything in moderation, including flank steak eating and fad dieting. DM Photo: The Paleo diet recommends eating like a caveman.