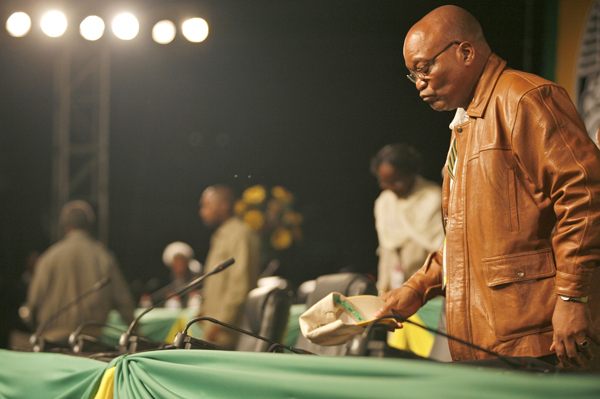 Paging through local media, an obvious question comes up time and again: Are those engaged in the battle for supremacy in the ANC unable to grasp how ridiculous and outlandish they sound? When you wade through the guff and try to interpret the messages logically, it becomes apparent that South Africans are being treated like fools by their leaders. By RANJENI MUNUSAMY.

Throughout the furore over crime intelligence boss Richard Mdluli’s mysterious reinstatement to his post and after various criminal charges and disciplinary procedures were dropped, neither the presidency nor the minister of police said: “Lieutenant-General Mdluli is indispensable to the fight against crime and that is why he is back at his desk”.

Surely that would be a proper, compelling reason to reinstate him? Throw in some statistics of how many crooks Mdluli caught during his tenure and his successes in this crucial area of crime-fighting – assuming he found the time to catch crooks in between flagging political conspiracies – and surely the critics would be forced to shut up.

Instead, the country is presented with a litany of denials and bizarre explanations. Police Minister Nathi Mthethwa, in a radio interview last week, seemed unable to provide an explanation for the reinstatement, despite all the unanswered questions in the investigations against Mdluli, and appeared to pin it on a loophole in a letter by Inspector-General of Intelligence Faith Radebe to the acting national police commissioner.

The presidency also fired off a series of denials relating to President Jacob Zuma’s relationship with Mdluli after the Mail & Guardian alleged that Zuma weighed in to block the criminal investigation against the police spy boss. Strangely, Zuma has not denied that he received a political intelligence report from Mdluli, which is solid proof that state resources are being used to spy on and fight adversaries in the ANC. He has also not denied the persistent rumour that Mdluli “helped” him during the rape case against him. How could a police official have “helped” an accused in a rape case without subverting the course of justice? Surely Zuma is aware or has been advised that failure to deny is perceived as an admission of fact?

On Sunday, City Press ran a story alleging that Mthethwa personally benefited from a crime intelligence secret account on Mdluli’s watch. The story alleges that R200,000 worth of renovations to Mthethwa’s house and a luxury Mercedes-Benz SUV he drove were courtesy of this “slush fund”. Mthethwa’s response was mind-boggling: “As a matter of interest, the minister’s favourite car brand is not even a Mercedes-Benz and would probably not buy this brand in future”.

Mthethwa seems to have taken more umbrage at being associated with the wrong brand of luxury vehicle than that he is allegedly a beneficiary of a serious crime of defrauding a state fund. It betrays an attitude of arrogance in the extreme and disdain for the taxpaying public.

But when it comes to insulting the people’s intelligence, ANC secretary-general Gwede Mantashe has turned it into an art form. At almost every press conference he admonishes journalists for the questions they ask and lectures them on questions they should instead be asking. As if oblivious to the fact that the media are the channel through which he communicates to his own constituency, his responses are cynical and deliberately obfuscating.

In the midst of his campaign to hold on to his job as the chief administrator of the ruling party, you would expect Mantashe to tone down on the abrasiveness and be on the charm offensive. But his response to comments by Nedbank chairman Reuel Khoza on the state of the country’s political leadership suggests Mantashe thinks he can continue to act like a playground bully and still be respected.

“I would be very worried if the business community begins to think that it has a monopoly of understanding of political leadership,” Mantashe told reporters at a media briefing last week.

Yet the ANC’s own “Second Transition” document acknowledges that there are worrying signs in the country, which can only be attributable to weak leadership. The documents quote the National Planning Commission’s indicators of “societies in decline” relevant to South Africa today: “rising corruption, weakening of state and civil society institutions, poor economic management, skills and capital flight, politics dominated by short-termism, ethnicity or factionalism, and the lack of maintenance of infrastructure and standards of service.”

The implication therefore is that only the ANC is allowed to debate the state of the nation and anyone else who attempts to do so must be beaten into submission. It is a tactic Mantashe’s arch nemesis, Julius Malema, mastered – to insult and ridicule anyone who dares to have a different view.

On his way out of the ANC, Malema presents his own master’s class: he has fashioned a new formula for survival through a breathtaking 180-degree turn in which there never was a campaign to unseat the current ANC leadership, and that there was never any untoward behaviour on his part. Apparently he is a victim of a powerful dictatorship opposed to his valiant crusade for economic freedom for the poor. In media interviews, Malema continuously denies that his mission was to boot Zuma and Mantashe out of their positions, and that “generational mix” was the only agenda behind Fikile Mbalula’s campaign for the secretary-general position.

Malema is fortunate that South Africans generally have a short memory and usually don’t remember incidents in detail beyond a few months back. After repeatedly insulting the nation’s collective intelligence, Malema has moulded recent history and his belligerent behaviour into a conveniently innocent  misunderstanding, hoping to quickly find some other platform from which to campaign against the incumbent leadership.

But the media and commentators are also lenient when politicians make inexplicable comments and tend to let things go no matter how absurd they sound.

Take for example ANC treasurer Mathews Phosa’s comment at the press conference by the party’s national officials last week. When asked why he didn’t immediately admonish Malema when he called Zuma a dictator in his presence, Phosa said, “I had no urge [at the time] to respond in kind [to Malema’s comments]. But if you read the speech, which is in the public record, you will see that there are three paragraphs that I added when I spoke. I said that the membership of the ANC would not appreciate it when there is a public spat [between leaders].”

He had “no urge”? Really? Then what gave him the “urge” to do so four days later, in a live press conference, in the presence of his five colleagues?

When state security minister Siyabonga Cwele’s wife, Sheryl, was convicted of drug trafficking and the minister responded to the news with “no comment”, a visiting international political consultant remarked how it was truly astounding that South Africans were so accepting of this. “It’s the most extraordinary response by the minister: he would have resigned or be sacked on the spot if this happened anywhere else. But you South Africans are very forgiving.”

He was, of course, being generous by saying “forgiving” because the indictment is on South Africa as a nation for allowing itself to be repeatedly treated like a fool by those who are shaping its destiny. DM Photo: Are the leaders of South Africa taking the general public for fools? REUTERS.