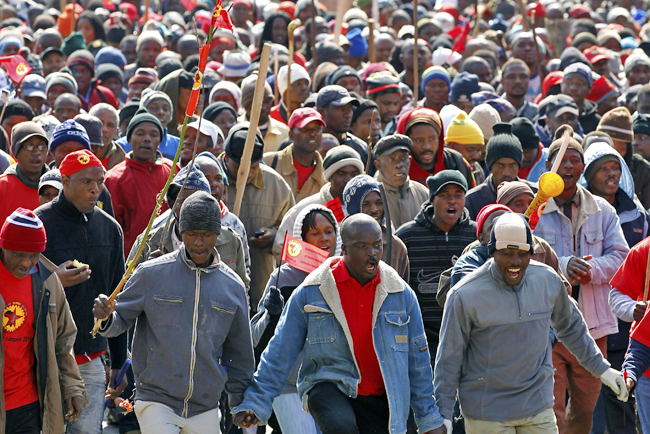 On Wednesday the Department of Labour started its hearings on amendments to the Labour Relations Act and Basic Conditions of Employment Act. Labour broking came up, of course, but most interesting were proposals to raise the requirements for a legal strike. By GREG NICOLSON.

South Africa’s Bill of Rights gives every worker the right to strike, but industrial action remains one of the key challenges to economic growth.

When hundreds of thousands of employees down tools in strike season there’s an immediate drop in output at companies directly affected. Those they do business with are denied necessary inputs and the damage is multiplied when essential services are compromised. Margins tighten as above-inflation wage demands outstrip productivity (which has fallen in the last decade as wages rise). The whole shebang is hardly an aphrodisiac for foreign investors.

Proposed amendments to the Labour Relations Act (LRA) will add a new obstacle to trade unions embarking on a strike in an attempt to crack down on violence and intimidation. Strikes or lockouts will only be deemed legal after a union or employer conducts a ballot of members eligible to participate in the strike and confirms the majority is in favour. “It is welcome and it shows there has been intimidation in the past. It will unquestionably reduce the number of strikes,” labour analyst Andrew Levy told IOL.

The 1956 LRA included a ballot requirement, but it didn’t make the 1995 version because of trouble ensuring compliance. “This issue is dealt with by providing that a certificate of compliance issued by the CCMA [Commission for Conciliation, Mediation and Arbitration], a bargaining council or an accredited private agency will serve as proof that a ballot has been staged in compliance with the statutory requirements,” reads a summary of the Labour Relations Amendment Bill, handed out at a briefing by the Labour Department on Wednesday in Johannesburg. The department’s chief director of collective bargaining, Thembinkosi Mkalipi, speaking to an audience comprising labour and business representatives, said the ballot requirements would help reduce industrial action that was only supported by a minority of members. “Violence or intimidation are more likely to occur under these circumstances,” says the department’s summary.

Trade unions have already declared their opposition to the ballots and committed themselves to having the amendment removed. National Union of Mineworkers spokesman Lesiba Seshoka called the proposals “ridiculous” and said they’re designed to impede industrial action. It will make going on strike “problematic”, he said. Workers are currently protected during a strike after a dispute has been lodged and approved by the CCMA. Seshoka says the majority of  NUM’s members approve of their strikes because they drive them and are consulted.

Cosatu will represent its affiliate trade unions at the public hearings on amendments to both the LRA and Basic Conditions of Employment Act in objecting to the proposal. Unions may strike for their right to strike, indicated Seshoka.

If the proposals do pass into law, they certainly won’t put a stop to strikes. One of the year’s worst strikes occurred at Impala Platinum’s Rustenburg plant, where employees downed tools illegally, after which they were fired, caused absolute chaos and were then intimidated by a small group of workers when they tried to return to work. So raising the bar to staging a protected strike will not necessarily prevent industrial action, nor lessen its severity.

If employees are working 14 hours a day for R4,500 per month, backed by a highly mobilised union and upset over the salary of executives, they’ll strike, legal or not. But the proposed amendments will decrease their frequency and could be the start to limiting the power of trade unions. Whether that’s a good thing depends on who you ask. If the economy could answer, it would surely say yes. DM

Photo: The amendments will include the raising of requirements for a strike to be legal. REUTERS.