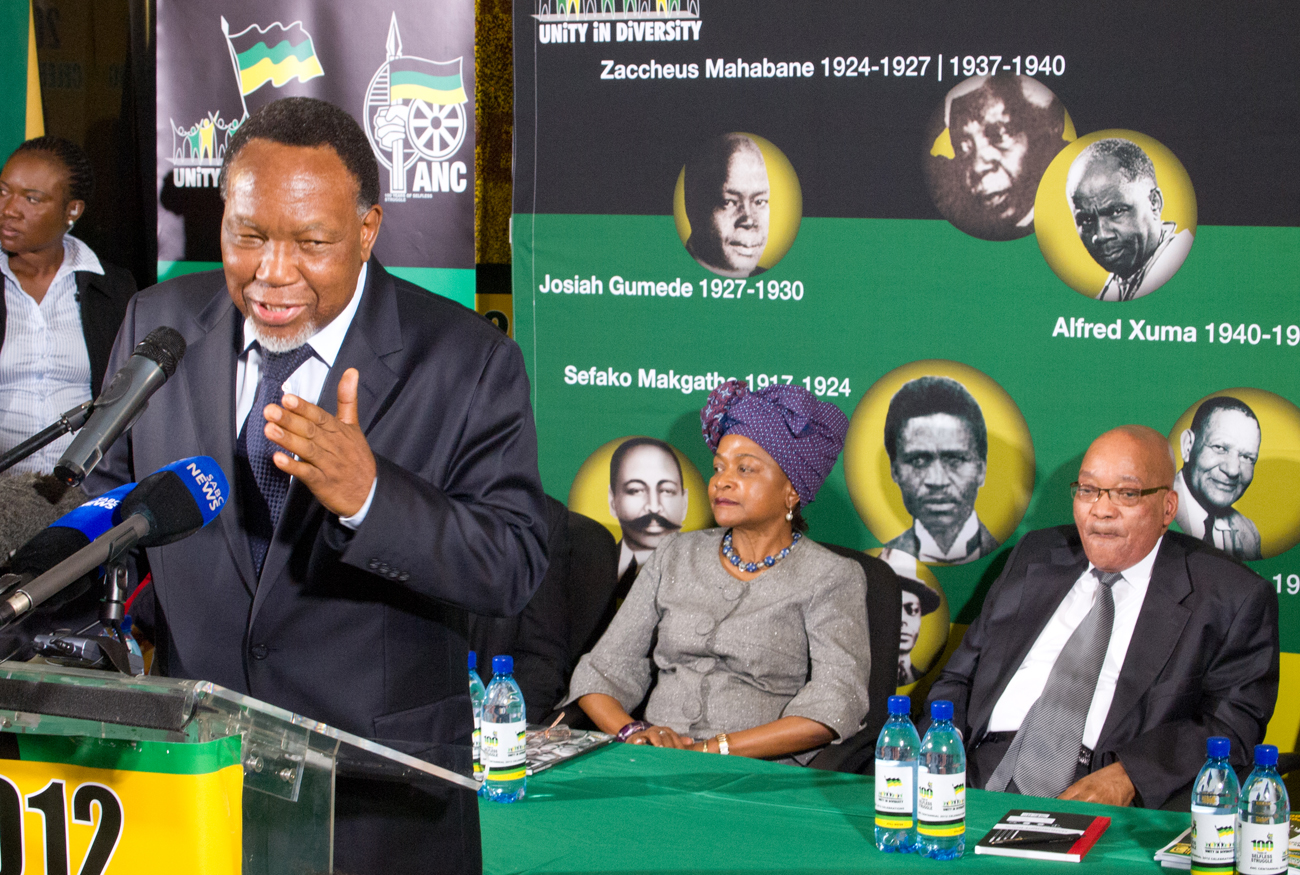 In an almost unprecedented move, the ANC’s national officials appeared at a joint press conference, where they called on internal bickering to cease. That would include the ANC Youth League and the MK veterans. And yes, Mathews Phosa and Kgalema Motlanthe were there too, delivering their own versions of the unity message. Current score: ANCYL 0 – Zuma 17,403. By SIPHO HLONGWANE.

On Tuesday afternoon, the national officials of the African National Congress (that is, Jacob Zuma, Kgalema Motlanthe, Gwede Mantashe, Mathews Phosa, Thandi Modise and Baleka Mbete) delivered a joint statement at a press conference, held at Luthuli House. Just that morning, the same building had been the scene of fighting words between the Umkhonto weSizwe Military Veterans Association (MKMVA) and the ANC Youth League, and the message of the officials (or top six) was: enough already.

“The ANC has a rich history spanning over 100 years of selfless struggles. The organisation is known for its rich culture, traditions and values, including placing a high regard on discipline and respect for one another as members, regardless of position or structures that we belong to within the movement,” said secretary-general Gwede Mantashe, reading from a prepared statement. “We are therefore very concerned about some alien behaviour within our movement, which has manifested itself in various ways including some shockingly crude, disrespectful and un-ANC remarks that have been in the public domain over the past few weeks. “These remarks in their content and spirit are an attempt to create a perception in the public discourse that the national officials of the ANC are at odds with each other and divided over a whole range of issues,” Mantashe said.

The top six were prompted to speak out after a busy weekend, in which ANCYL president Julius Malema spoke at the centenary celebrations at the University of Witwatersrand, where he said Zuma behaved like a dictator. Phosa was present at the event. On Sunday, Malema appeared at a rally in Tzaneen, where some members of the ANCYL wore T-shirts bearing Kgalema Motlanthe’s image. The ANC has expressly forbidden this – the only face that is allowed is that of the ANC president, until the leadership debate is formally opened in October.

Very conveniently for Mantashe’s message, the MKMVA then decided to respond very strongly to Malema that day, only to prompt a sneering retort from ANCYL secretary-general Sindiso Magaqa just minutes later.
“As national officials of the ANC we believe that the time has come to put an end to the blustering and often incomprehensible remarks that are made by various leaders and members of the ANC,” Mantashe said. “The examples are the statements made by MKMVA today and the response thereto by the ANCYL. The constitution of the ANC dissuades any of its members from engaging in any action that will disunite the ANC along factional, racial, ethnic or class lines.”

Malema has repeatedly said the charges against him – which were aimed against him by the national officials – are politically motivated and are a witch hunt on Zuma’s part. This comment drew massive umbrage from Mantashe, who said it was a great insult not just to Zuma and the national officials, but to all members of the NEC (of which Malema is one.) Mantashe said anyone who sat in NEC meetings would be party to a robust debate on all issues, and it was thus insulting to create the image of the other five national officials and the NEC being “mindless dwarves who run around Zuma”. Photo: Mantashe called for an “end to the blustering and often incomprehensible remarks that are made by various leaders and members of the ANC”. JORDI MATAS.

The subtext to this rather bizarre press conference became apparent when Motlanthe and Phosa were asked by Mantashe to speak. Phosa was present at the Wits lecture, and Motlanthe was with Malema in Limpopo. News reports of both events characterised their presence as an indication that they had thrown their lot in with Malema – meaning that they now openly opposed Zuma – but the secretary-general said this was an unfortunate interpretation, since the forums at both events didn’t allow for an immediate retort from Motlanthe or Phosa. In any case, doing this would have run the risk of creating the impression of disunity.

Phosa said on Tuesday, “I had no urge [at the time] to respond in kind [to Malema’s comments]. But if you read the speech, which is in the public record, you will see that there are three paragraphs that I added when I spoke. I said that the membership of the ANC would not appreciate it when there is a public spat [between leaders].”

Motlanthe himself said, “We will continue to use every platform to emphasise the unity of the organisation. We are very consistent in promoting unity. Those who try to use our names to divide will not succeed.”Now, try as we might, we cannot but feel that there is definitely more going on here than the top six are letting on. By way of illustration, cast your mind back to the ANCYL’s national general council in August 2010. The deputy president at the time, Andile Lungisa, was considering whether or not he should have a run at Malema for party leader. He had about 18 months or so in which to start politicking, which is just about the right amount of time. Unfortunately for him, Malema ran over him like a steam train. He not only flattened him, he properly cast him out into the wilderness. Not only is Lungisa no longer the second-in-command in the league, he’s not in the league’s NEC.

At ANCYL conferences, they routinely toss the media out when they want to have a fat brouhaha. Malema has perfected the art of timing exactly when the media are invited back into the hall. He used it to great effect that day, bringing the journalists in just as the programme master asked the hall whether or not they forgave Lungisa (the answer was: yes!) What Lungisa needed to ask forgiveness for was never officially clarified, but it was about as obvious as having a rhinoceros sit on your face. The man was defenestrated and neutered.

There is almost nothing more powerful, within ANC politics, than having your supposed rivals have to sit next to you before the public and proclaim that the organisation is unified.

One couldn’t but feel that the real point of Tuesday’s press conference was to have the men who are apparently campaigning to have Zuma removed sit next to him and proclaim in coded words that the MacDaddy of our politics is still in charge. Especially Phosa. He’s a bit of a loose firecracker compared with Motlanthe. And now both he and Motlanthe have sat next to Zuma and said that the top six are united. Well, behind whom?

It’s a fantastic trick that Zuma has pulled. He’s come up on top once again.

But this is definitely not the end of it. Remember, Motlanthe has not actually stated that he will definitely not run for president (he will wait for the perfect moment). When it comes to the man we’ve often called the Keyser Söze of local politics, it is never over until the fat lady is hoarse. DM