The 'Monster', his men and the twists and turns of the...

The ‘Monster’, his men and the twists and turns of the Modimolle trial 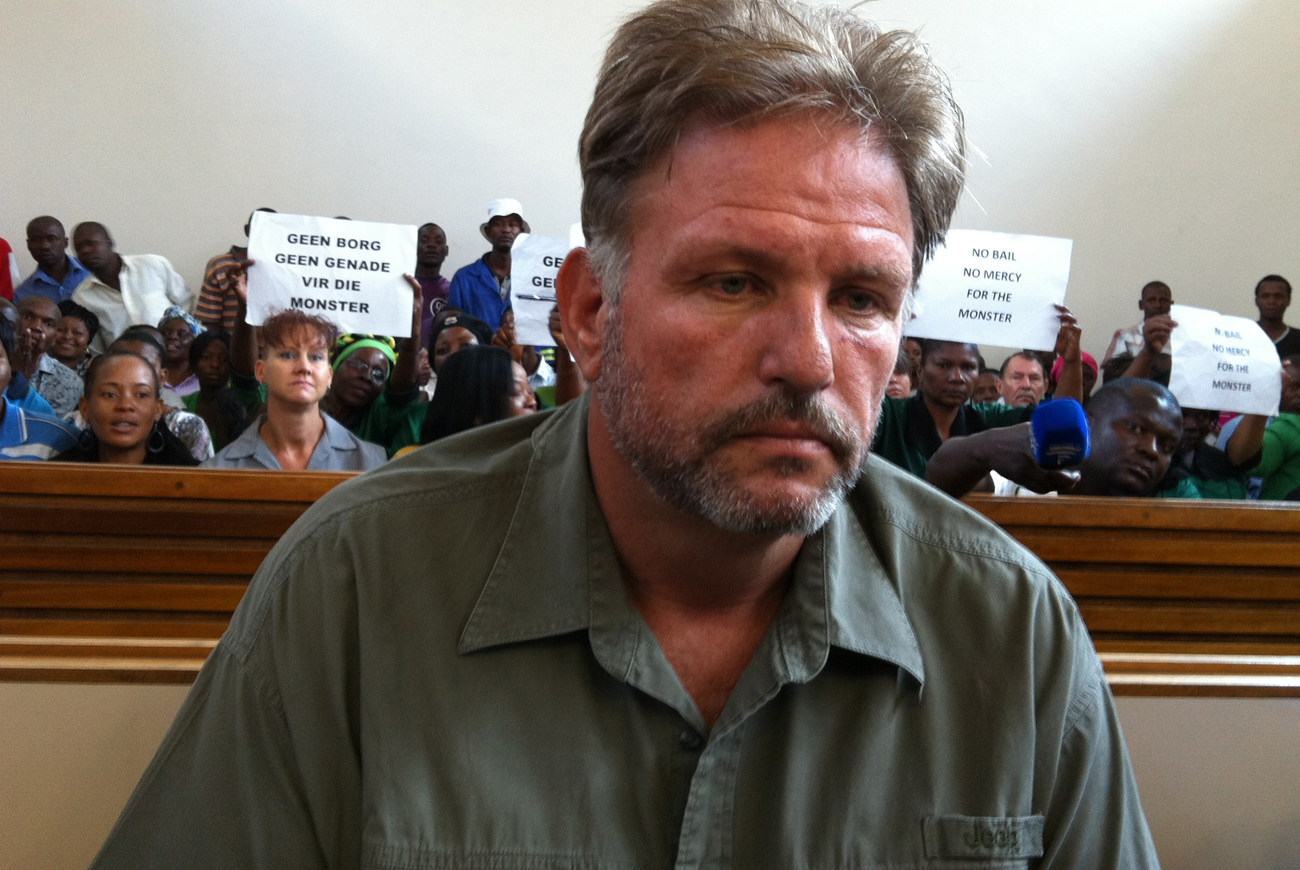 The refusal of bail to three men who allegedly helped the so-called “Modimolle Monster” rape and torture his estranged wife was not unexpected. It was a crime that outraged the nation, the grim details of which kept a senior state prosecutor up at night. ALEX ELISEEV survived a small flood and the local Wimpy in Modimolle to bring you some insight.

It was never going to be an easy battle. But, as so many bail applications do, this failed attempt did gave us a crystal ball that helps us see what the trial of Johan Kotze and others should look like. Next month, Kotze and his three co-accused, Pieta Mohlake, Paparona Sithole and Sello Mphaka, will return to the Modimolle magistrate’s court to be served with a final indictment and to have their case transferred to a high court, probably in Pretoria.

Unless there are procedural delays, the four men should go on trial several months later, to face charges of murder, rape, attempted murder, kidnapping and assault.

It will be an emotional and difficult trial, with the victim, Ina Bonnette, expected to be the state’s star witness. And, judging by the charges that were read out during the bail application, her story will be harrowing.

According to the state, Kotze and the workers he hired attacked Bonnette at her home early in January. She was allegedly raped, beaten, slapped, punched, smothered with a towel, suffocated with tape, tied up with cable ties, had her breasts punctured, toes broken, pubic hair pulled out and tortured with pliers and nails. Listening to prosecutor Renier van Rooyen read out these details was enough to make one’s blood run cold.

There were further details about the attackers trying to organise disguises for their faces and planning the crime in advance, with numerous phone calls between Kotze and his workers. All these details are likely to form part of the indictment that will follow shortly.

In a nutshell, the state claims it was a premeditated attack, which ended in the murder of Bonnette’s teenage son, who was lured to her home.

At the time of their first few appearances, it seemed that none of the accused would secure bail. There was so much anger within the community, the violence of the crime was so dramatic and, by all accounts, the suspects were already co-operating with the police.

It remains unclear what changed, but the three workers decided to use one lawyer and almost identical affidavits to seek their freedom. So for now, there is no indication of them turning on each other, but that could change during the trial.

The three offered R500 for bail, claimed they had neither the money nor the documents to flee and were not a danger to society. They tried to convince the court that all the anger felt by society was being directed at Kotze, with the lawyer even suggesting that when he was absent, the courtroom was empty and the streets were quiet. This was partially true.

They spoke of being threatened by a gun that Kotze was carrying, but never said it was pointed at them. The state later revealed that Kotze was armed with a rifle and not a handgun.

The trio spoke of battling to understand Afrikaans and relying on each other for translations, of racial abuse being hurled at them, of feeling “confused and traumatised” and violated.

They painted themselves as innocent farm workers being commanded by a man who called them “kaffirs”. But the state asked why they then waited to be picked up by Kotze after the crime and why they failed to run to the police?

So when the trial begins, this version will be tested by the state, which will have at its disposal phone records, ballistic tests and forensic evidence, not to mention the testimony of the woman who survived the brutal attack.

The workers say they will plead not guilty at the start of the trial, but it will be interesting to see what Kotze decides to do. By staying away from these bail proceedings, his cards are better hidden, at least for now. Those close to the case think he will try to play down his involvement in the attack, and isn’t likely to throw himself on the mercy of the court. This would force the prosecution to prove each and every one of its allegations.

Based on this, and the attitude of his co-accused, it now appears this trial will have to delve into the painful details and unravel vastly contradictory versions of events.

Yesterday, the court found little evidence to warrant the workers being released. Being a schedule 6 hearing, the onus was squarely on them to prove exceptional circumstances, which the court felt they failed to do.

None of them testified, called witnesses or submitted evidence. They claimed they were at the “mercy and control” of Kotze, but didn’t explain exactly what they were forced to do. This must have given the court an impression they were not being entirely open, waiting to hear what allegations they will need to answer to.

In the recent case of a Johannesburg karate teacher arrested for sexually molesting his students and raping one of them, the defence fought for months to secure bail (also on a schedule 6 basis). It led character witnesses, presented medical records and exhibits of karate uniforms worn by children. It fiercely cross examined the police’s investigating officer and tried to discredit the state’s case. It argued the elderly instructor’s health was deteriorating in prison. It lost and tried again, bringing a fresh application based on new evidence. And eventually it won.

It remains to be seen whether the Modimolle ruling will be appealed, but without new information or a fresh approach, there is little prospect of success. But no trial of this magnitude is without its twists and turns and all we can do is wait and see. DM Photo: Johan Kotze and his co-accused will return to the Modimolle magistrate’s court next month to be served with a final indictment and to have their case transferred to a high court. EYE WITNESS NEWS.