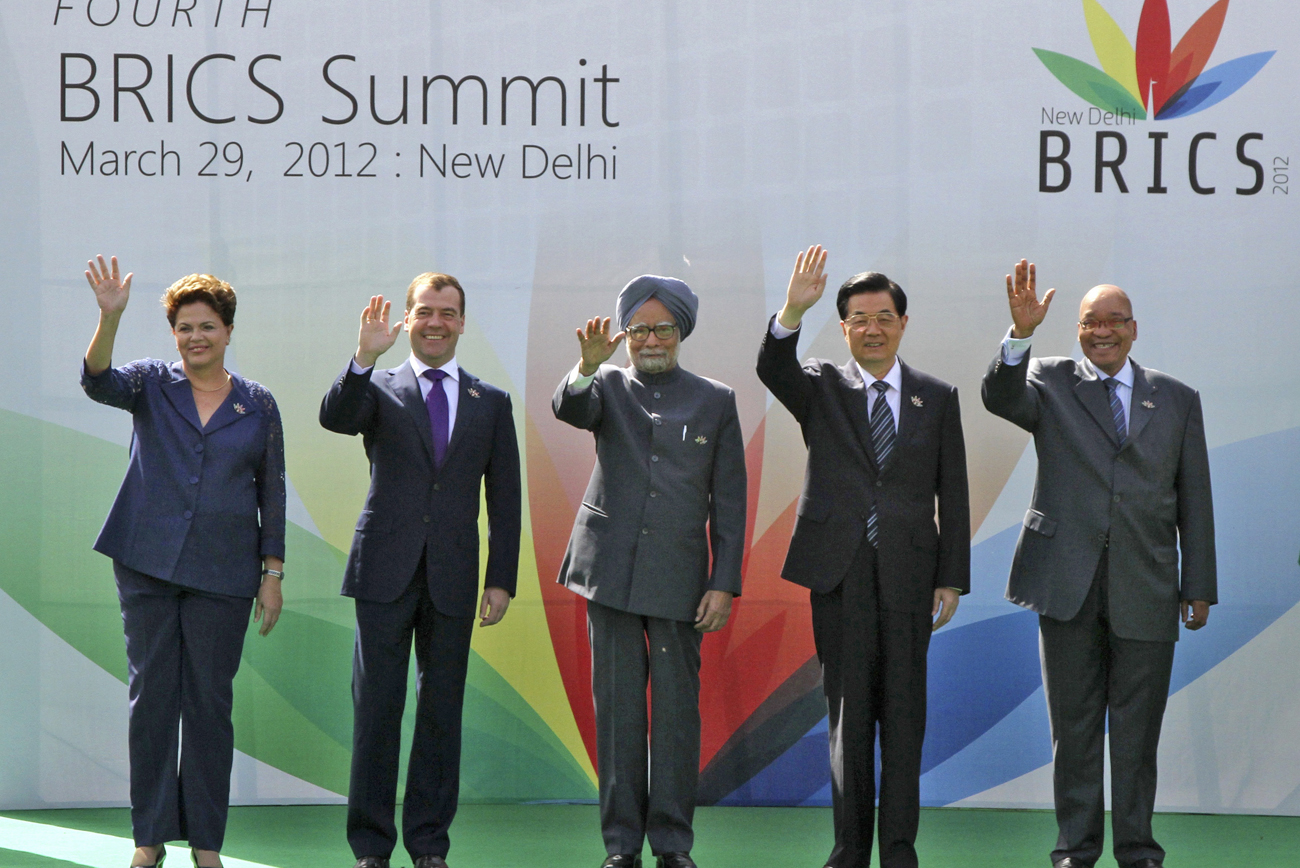 As the fourth annual Brics summit convened in Delhi last week, heated debate raged through the media about our inclusion in the exclusive Brics (Brazil, Russia, India, China and South Africa) club of emerging economies. Can South Africa really assist Brics achieve anything as a group? Or are we punching way above our weight? By KHADIJA PATEL.

In the by now well known Goldman Sachs report from 2003, Brazil, Russia, India and China (Bric) were identified as the global economic powers of the future.  Last year South Africa joined the club, forcing a name change to the elite club. But the likes of Indonesia, South Korea and Turkey are also biding their time in the wings, keenly anticipating their inclusion into the club.

There is little doubt that this disparate group of rapidly burgeoning economies has the collective clout to influence tangible outcomes at the global level. While the strength of the G-7 economies appears to have slightly dwindled in the morass of the global financial crisis,  Brics’ has grown and South Africa’s membership has become the subject of much debate.

A good many South Africans were outraged by comments by the man who first coined the Bric acronym. Goldman Sachs Asset Management global chairman Jim O’Neill observed South Africa “has too small an economy” to merit inclusion, and that “countries such as Nigeria carry more power now”.

South Africans are well aware Nigeria is on course to dwarf South Africa as the largest economy on the continent. Already Lagos is being hailed as the new Johannesburg, but surely the present state of the South African economy merits inclusion among the world’s most vibrant economies? This is South Africa after all – gateway to Africa, home of the rainbow nation, harbinger of hope for a fractured world.

South Africa thus lobbied enthusiastically to join the Bric club. In huddling with Brazil, India, Russia and China, South Africa was alive to the opportunity of forming strategic alliances and helping advance the role of emerging economies in restructuring global political, economic and financial architecture. If the Brics nations are too far apart geographically and too disparate politically to forge a useful alliance, then the ideology of multilateralism has brought together a subversive new power in politics as well as the world economy.

While Brics has offered the ideal platform for South Africa to promote pet causes like United Nations reform, the fact that we are not a “natural” member of the club is seen to leave us in a position of relative weakness.

South Africa, of course, has promoted itself as an integral link to the African continent. It is our status as self-acclaimed gateway to the continent that has afforded us membership into Brics and an opportunity to explore lucrative markets for our goods and services, and to implement the Industrial Policy Action Plan and the New Growth Path framework. There certainly is a wide scope for co-operation in various projects within the Brics structures – membership in Brics will promote trade and investment, enhancing industrialisation and promoting job creation. There is little doubt that South Africa benefits and will continue to benefit from clubbing together with the likes of the Bric countries, but what is being contested is the potential of the South African economy and its political underpinnings to actually take advantage of these possibilities.

South Africa is of course a privileged member of various other global governance clubs like Brics: the G-20 heads of state,  Ibsa (India, Brazil and South Africa) and the Economist Intelligence Unit’s Civets (Columbia, Indonesia, Vietnam, Egypt, Turkey and South Africa) class of emerging economies. South Africa’s inclusion into Brics then follows a trend of South Africa’s membership of these global cliques. Peter Draper, Adjunct Professor of International Business at Wits Business School believes South Africa’s inclusion into these clubs is a legacy of the country’s peaceful transition from apartheid to democracy, coupled with its relative economic weight over the rest of the continent.

Draper, however, warns that this appeal is fast fading: “Those foundations are waning in the face of the African National Congress  government’s growing ambivalence towards democratic norms and the relatively rapid growth and development taking place in sub-Saharan Africa.”

“The ANC government’s own policy choices, particularly its emphasis on state-driven economic policy, and the internecine power struggles racking the party have set the country’s economic policy adrift. Thus investor confidence has been undermined at a time of global economic crisis. Taken together, these trends suggest South Africa’s days as the African representative of choice are numbered.”

Jim O’Neil, the man at the centre of the current furore surrounding South Africa’s inclusion in Brics, notes that it has been more than 10 years since he created the acronym. “In recent years, when quizzed by the growing number of policymakers on what they can do to get their countries included in Brics, my answer is usually one of two things: get more people, or dramatically boost your productivity rate. I have argued that, to be truly ‘Bric-like’, an economy has to be already 5% of global GDP, or demonstrate the potential to be that large in the near future,” he says.

Writing elsewhere last weekend O’Neil notes, “When I first created the acronym ‘Bric’ more than 10 years ago, it was meant to describe those countries large enough today, or which might be large enough in the future, to be literally part of the ‘bric’ or fabric of the modern global economy.” More tellingly, however, he confesses he has been approached by many countries to make space in the acronym for their countries. “There are many other countries larger than South Africa that have approached me and asked me to consider using one of their initials as part of a new, broader acronym, but I find it difficult to see how they can achieve the status of this simple definition,” he says.

South Africa’s inclusion into Brics, then, belies the logic of the likes of Goldman Sachs executives. Our membership of the club demonstrates that this is a club of nations brought together to maximise economic opportunities and challenge the status quo. South Africa’s inclusion into Brics, against the logic and indeed without the behest of the man who seems to have clubbed the nations together, proves that this is a new political and economic block that will forge alliances to cement its own political progress and ensure economic survival, no matter what the numbers say.

Ebrahim-Khalil Hassen, editor of ZAPreneur, a veritable treasure trove of public policy analysis, concludes that South Africa’s inclusion in Brics is valuable for the learning potential it offers. “There are many questions to answer, but focusing on the size of the economy for each of these countries is only part of the story,” he says. “South Africa will hopefully benefit from lessons and failures in the Brics countries, and begin to implement some of the more imaginative and sustainable programmes we have seen in Brazil and India.”

The end of apartheid brought positive economic growth to South Africa. Roger Southall, writing in the New South African Review, notes that the 15 years after the decline of apartheid brought an increase in per capita incomes from R20 214 in 1994 to R25 897 in 2008 and a decline in the proportion of people living in absolute poverty from 4.2% in 1996 to 1.4% in 2008.

And while these numbers are laudable in themselves, for South Africa to justify its inclusion in the Brics club, the potential for intra-African trade and investment must be maximised. But, so too, much needs to be done to restore growth and international confidence in the country. If that’s not a tall order enough, South Africa must also work towards justifying its position in Brics while ensuring the fruits of economic growth are more equitably distributed. DM