Brics summit exposes the high wall between India and China 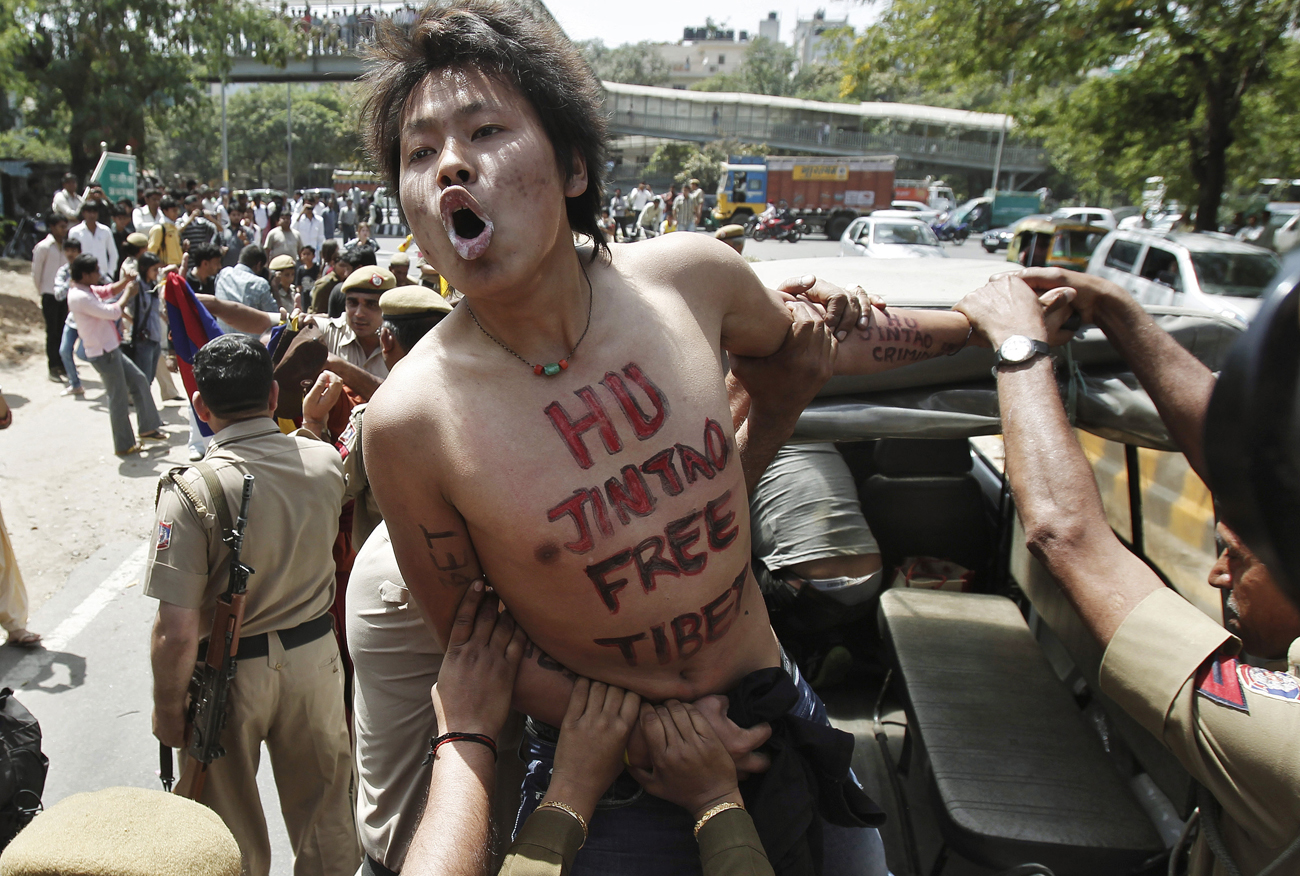 The fourth Brics summit concluded in India on Thursday with the signing of The Delhi Declaration – a commitment from the  leaders that President Jacob Zuma believes, “will reinvigorate our collective resolve to find global solutions to global challenges”. By KHADIJA PATEL.

And while this commitment certainly does bode well for closer cooperation between the Brics countries – Brazil, Russia, India, China and newbie South Africa – the Tibetan protests outside the summit this week have exposed the hostility between India and China over Tibet.

March has long been a restive time for Chinese authorities in Tibet. It is a month marked by key anniversaries in the Tibetan struggle for freedom and this year tension between Chinese authorities and Tibetans has been exacerbated by 26 acts of self-immolation protesting against Chinese policies in Tibetan areas.

The upsurge in Tibetan protest movements began in early February after large numbers of monks and students were reported to have taken to the streets to march against Chinese authority in Tibet. At a stadium in the Qanghai in early February, a large number of students and other civilians were reported to have gathered, shouting slogans like, “Freedom for Tibet” and “Long Live the Dalai Lama”. The same day, another large group of Tibetans, including many monks, gathered in the main monastery in Nangchen, and chanted prayers for the return of their leader. Chinese authorities allowed these demonstrations to take place, but are said to have later begun a crackdown against anyone believed to have participated in the protests, distributing leaflets calling on people who joined the demonstrations to surrender to the police.

On 13 March some 4,000 school-goers held demonstrations in Rebkong and the neighbouring Tsekhog region in protest against the replacement of Tibetan by Chinese as the medium of education in the local schools. Similar demonstrations on the same issue had taken place in October 2010.The Chinese authorities reportedly closed down the schools where demonstrations took place and detained the suspected participants in the school premises pending investigation by the police. The following day, a 30-year-old Tibetan monk attempted self-immolation at a monastery in Qinghai. Chinese authorities intervened, put out the fire and he survived with severe burns.

As unrest spread within Tibet itself, the Tibetan diaspora in India also readied itself to launch protest action of its own against the arrival of President Hu Jintao in Delhi. Jhampel Yeshi, a 27-year-old Tibetan living in exile in India, set himself alight at a protest this week, in full view of the media. His clothes and skin doused with kerosene, Yeshi ran some 50m streaming flames until collapsing in a gruesome heap. He died from his injuries on Wednesday morning, prompting further demonstrations by Tibetans in India against what they deem the brutal Chinese occupation of their homeland.

The Indian government, careful to quell further unrest, arrested nearly 300 Tibetans in Delhi this week invoking a colonial law that wards against such dissent. Observers in Delhi claim the crackdown was similar to the lock-down imposed on Tibetan activists who threatened to disrupt the torch relay ahead of the 2008 Beijing Olympics.

Yet even, as Indian officials draw criticism for their crackdown on the Tibetan dissent in Delhi, the Indians are certainly not known to kowtow to the Chinese. Although Indian Prime Minister Manmohan Singh and Chinese President Hu smiled for the cameras at the Brics summits, the Chinese and Indians have a long history of acrimony in which Tibet features prominently. The presence of the 80,000-strong exiled Tibetan community in India, headed by its spiritual leader, the Dalai Lama, is a constant source of friction between the two countries. Alongside the vast distances between Brics members and their divergent political and economic systems, the rivalry between the world’s two most populous nations is seen by critics as one of the greatest obstacles to the progress of the bloc.

“At the heart of the Chinese and Indian rivalry over Tibet is the issue of contested boundaries,” Jayadeva Ranade, distinguished fellow at the Centre of Air Power Studies in New Delhi told iMaverick on Thursday. Much of the consternation over Tibet as a contemporary issue is in fact rooted in the history of contested borders. Tibet had existed throughout history as a distinct civilization with rich culture, language, religion, polity and identity. Through the centuries India and Tibet have maintained strong religious and trade ties and shared a peaceful border. But the advent of British power on the Indian sub-continent altered the nature of this relationship.

The British Raj’s policy towards Tibet was shaped by fears of Russia posing a threat to British-led India. It was against this backdrop that the Raj called for the tripartite Simla conference in October 1913, which was attended by representatives from British India (Henry McMahon), Republican China (Chen Yifan) and Tibet (Lonchen Shatra). The goal was to settle the boundary between British India and Tibet on the one hand and between Tibet and China on the other. The result was the Simla Agreement of 1914, which the Chinese representative initialled, but only under British pressure. The Chinese never ratified the agreement internally.

In 1959 the Chinese Premier wrote to his Indian counterpart, insisting the Sino-Indian border had never been delimited, pointing out China had never recognised the McMahon Line. It was also in 1959 that the Dalai Lama fled to India.

India has maintained the Dalai Lama was welcomed into India as a venerable religious leader. His stay in India was made possible as long as he refrained from engaging in anti-Chinese political activity. And while both China and India have enjoyed phenomenal economic growth in the last 10 years, trade between the two countries increased without defusing tensions. According to Ranade, Chinese and Indian officials have undertaken to double the volume of trade between the two countries.

Yet, the Chinese, Ranade said had never ceased to voice their displeasure over the Indian hospitality extended to the Dalai Lama. Chinese suspicion of India is founded in three issues, the Dalai Lama and Tibet issue, the greater border dispute and India’s geopolitical ambitions. Although many Western nations have capitulated to Beijing on matters such as human rights and Tibet – issues which have previously been used to castigate Beijing – both the Indians and the Chinese show no signs of striking a compromise over their historical differences, no matter the goodwill extended on forums like Brics. Ranade pointed to Chinese statements on Japan and Philippines in the course of the last two years, when Chinese officials sought to emphasise that good economic relations did not necessarily denote an improvement in economic relations.

“Any thinking that India-China relations will improve in case India is able to broker a thaw between the Dalai Lama and Beijing is unreal,” Ranade said. “The initiatives taken by Beijing confirm it has decided to wait the Dalai Lama out. Realistically, the current unease in relations is unlikely to dissipate at least in this decade.” China and India are set to continue their rivalry for some time yet. DM

Photo: A Tibetan exile shouts slogans after being detained by police during a protest against the visit of Chinese President Hu Jintao to India, near the venue for the BRICS (Brazil, Russia, India, China and South Africa) Summit in New Delhi on 29 March 2012. REUTERS/Adnan Abidi.