Analysis: The glass ceiling is smashable from the inside out 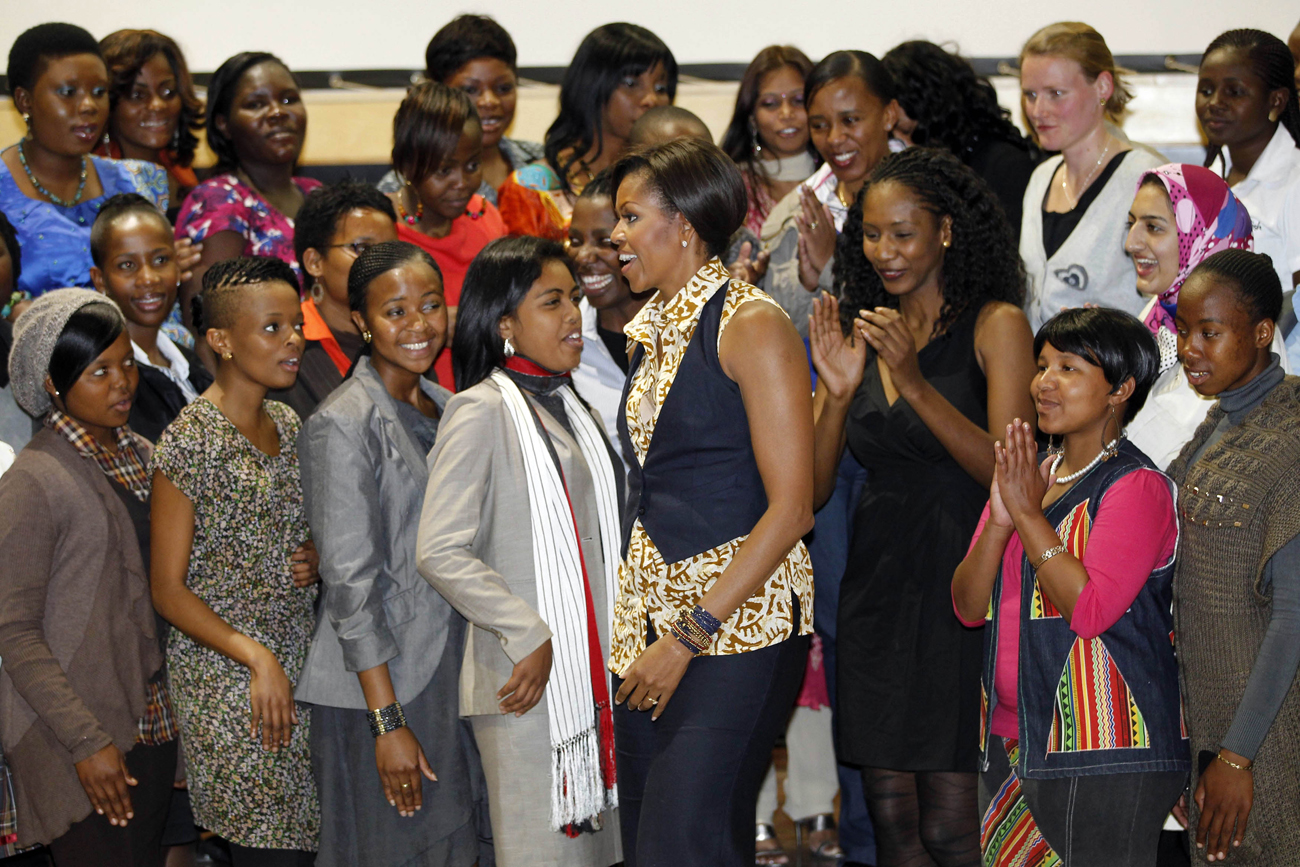 Most democratic societies consider themselves, constitutionally at least, to be gender-equal. But while legislation may not discriminate against women outright, equality is still a long way off in even the most liberal societies. And the answer to greater empowerment and more profitable leadership may lie within women themselves. By MARELISE VAN DER MERWE.

In South Africa, we have one of the most liberal constitutions in the world and our government has been hailed as a leader in gender equality owing to its high representation of women in Parliament. But on the ground, the data are still disconcerting: more women are unemployed than men, almost one-and-a-half times more women than men have no formal education and teenage pregnancy remains a significant threat to the career prospects of young women.

Further afield, even where more women are formally educated, the picture isn’t much better. According to the US Bureau of Statistics, 23% of women achieve tertiary qualifications versus less than 14% of men – and yet, despite these higher qualifications, they are paid on average just 80% of men’s earnings in equivalent positions. Interestingly, the fields representing the biggest gap between the earnings of women and men are in the finance industry, retail and sales and, perhaps most surprisingly, legal professions (where one might have expected women to be better equipped to fight for their equality). Internationally, it’s only countries such as Norway and Sweden, where legislation governs mandatory employment quotas in the interests of female empowerment, that have more promising statistics (Norway boasts 44.2% female board members across all industries, while Sweden has set its target at 40% by 2015).

The bottom line is that the glass ceiling seems as shatterproof as ever. Recent statistics reveal that in countries where the representation of women in middle-management is on the rise, the percentage of women in senior positions still remains virtually unchanged. In fact, women still fill less than 15% of executive officer positions at Fortune 500 companies and make up just 3.6% of CEOs.

But why? Researchers have pinpointed various contributing factors, from cultural bias and assumptions about leadership in male-dominated organisations to the demands of family life. But, perhaps most disconcertingly, several studies point to self-imposed limitations, which generally occur at an unconscious level, making them that much harder to combat.

It is what most concerns scholars Gail Hackett and Nancy Betz, who argue in their paper “A self-efficacy approach to the career development of women” that “[L]argely as a result of socialisation experiences, women lack strong expectations of personal efficacy in relationship to many career-related behaviours and, thus, fail to fully realise their capabilities and talents in career pursuits”. In short: even when legislation doesn’t actively hold women back, the damage is often already internalised. Disempowerment experienced at a social level eventually filters through to self-image, where it becomes a self-fulfilling prophecy.

It follows, then, that disempowerment needs to be challenged through increased self-awareness and, at the risk of stating the obvious, the confidence to question the status quo. Marjolijn Dijksterhuis, director of the Women in Leadership course at the UCT Graduate School of Business, says change has to be tackled on multiple levels: the legislative, organisational and, most importantly, the psychological levels. “One of the most powerful tools for leadership growth is personal inquiry and what steps you personally need to take to take your leadership to the next level,” she says.

So even where gender equality is being tackled on a legislative or organisational level, women still need to institute change from the inside out, starting with self-examination and moving on from a position of greater empowerment and questioning. For this reason, Dijksterhuis believes, it is vitally important to offer women a non-discriminatory space in which they can hone their leadership capabilities and form a more realistic picture of their own strengths, challenges, responses and possibilities. And this may best be facilitated by a potentially controversial topic: women-only leadership education.

Dijksterhuis argues that for her alumni, a single-sex environment has been hugely beneficial. “It is not about fostering an ‘us-them’ mentality,” she explains. “We simply see that same-gender groups generally find it easier to open up to each other, which is critical for a programme of this kind. It is designed to be a catalyst for personal leadership transformation and participants need to share their challenges and experiences to achieve the desired outcome.”

Dijksterhuis believes the single-gender format drives a deeper learning, which, in turn, is more conducive to personal transformation. In this sense, a women-only leadership programme can offer more than traditional programmes. “The single-identity format allows the additional discussion of issues, concerns or obstacles common to the group. Participants feel freer to probe more deeply into their own self-concept, and perceived strengths and weaknesses, without the need to satisfy a certain image or expectations of other identity groups. It allows exploration of that part of their identity that is shared. There is also the opportunity to discuss issues not often tabled in organisations where conversations are shaped by the majority, which would usually be men.

“The learning is deeper, as the fact that the participants are all women allows trust to emerge relatively quickly. Trust is essential in a leadership transformation programme. It is a catalyst for personal and professional change.”

And lastly, though it may not go down well, research shows that single-identity groups are more conducive to constructive criticism. In short, critical feedback from men can be rejected on the grounds that it is prejudiced, whereas the same feedback, offered by a peer female leader, will often be more easily accepted.

Fahmeeda Khan, planning and scheduling manager at Chevron, agrees. Herself a graduate of a women’s leadership development programme, she believes the self-awareness she gained was the key to unlocking her own capabilities as a leader. “The tools I now practice allow me to contribute more effectively in my leadership meetings, to be aware of when I need to shift from the listening mode to the facilitating mode and when to drive for a particular end result,” she says. “Now, in the moment, while the event is actually occurring, I am fully conscious of the role I am playing or choosing. This empowers me to choose from a conscious base to always be authentic and true to myself.”

Khan corroborates the view that it’s important to allow women these initial opportunities for self-examination in an all-female, and therefore indisputably gender-equal, environment. “It was an experience that liberated me from certain mental models of the role of a woman in a male-dominated workplace,” she says.

Nobuzwe Mbuyisa, planning and pricing manager at Chevron, says leadership education in an all-women environment enabled her to have a learning experience which “went beyond simply tools, or an instruction of ‘this is how we do things’”. The result was a stronger understanding of herself and others, as well as a greater appreciation of own contributions and those of her team, which yielded extremely promising results, particularly in driving positive outcomes during challenging meetings.

All of which is fascinating and undoubtedly relevant to women leaders themselves. But not all companies are dedicated to growing their female leaders – although for their own wellbeing, they should be. According to the Corporate Research Foundation (CRF), 74% of companies ranked in the latest Best Employers report are prioritising the empowerment of black and female leadership candidates. Furthermore, research is increasingly showing gender equality delivers rewards organisation-wide. So, in short, it is vital to invest in women leaders: not just because it is right, but for the benefit of businesses.

Ginka Toegel of Forbes Woman writes: “There has been a great deal of research which suggests the value of having gender-diverse management teams. For example, companies that have more than three women in management positions tend to have better returns on equity and assets than do those with fewer women. They also tend to score higher on organisational effectiveness criteria.”

Furthermore, Toegel adds, research shows that female leaders are more likely to demonstrate what is known as “communal” values: friendliness, support and a caring attitude rather than the “agentic” approach (assertiveness and dominance). And this communal style of leadership delivers great benefits to businesses. Research by the HeartMath Institute shows that fostering positive emotions in employees, through a caring and compassionate approach by leaders, delivers a measurably positive impact on staff performance. This includes greater achievements, creativity, problem-solving and decision-making skills, better memory, flexibility and overall health. Most importantly, HeartMath – like Dijksterhuis – advocates greater self-awareness and regular introspection as the starting points for this kind of beneficial leadership.

Empowering female leaders isn’t just ethically sound. Gender diversity expands a company’s leadership approach and grows businesses. And far from being dismissed as a wishy-washy “soft” approach, self-analysis should be considered a serious business tool for both female empowerment and organisational performance – effective in growing the influence of women in leadership, but also in spreading other benefits organisation-wide.

Our economy as a whole can benefit from gender equality. But if we want to seize these benefits, we can’t just change laws and policies. We need to invest in educating women to examine themselves, their behaviours, their self-concepts and capabilities, and their individual opportunities for growth. And then, as the statistics show, the business and personal results will speak for themselves. DM