Budding entrepreneurs 101: You gotta believe it

Budding entrepreneurs 101: You gotta believe it 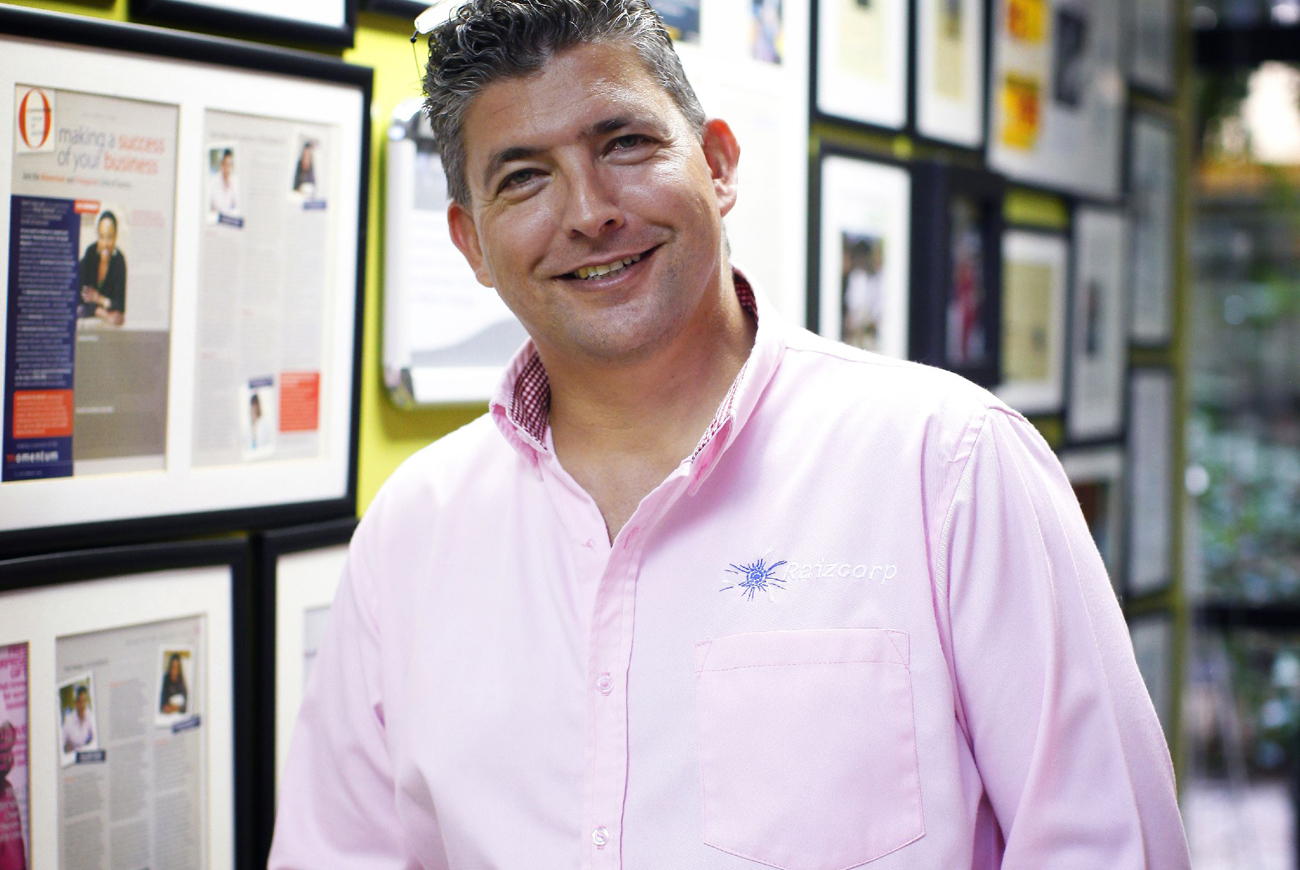 Despite having been identified as crucial to SA’s economic growth, entrepreneurship is still clotted in myths and stereotypes. To get a better idea of what it’s about, GREG NICOLSON visited Allon Raiz, an entrepreneur helping other entrepreneurs grow.

“Don’t let what you cannot do interfere with what you can do,” reads a John Wooden quote above the urinal in the men’s toilet at Raizcorp. At reception, the company’s successes and challenges are framed alongside more quotes. Photos of its support programme partners line the hallways of the offices that feature a gym, dream room and chill room.

Allon Raiz sits in the boardroom, a wall of portraits behind him. The meeting is interrupted by Faith, the hospitality hostess, carrying tea and coffee. She offers her business card and a packet of forget-me-not seeds as a symbol of our “everlasting” relationship.

“They mean nothing,” Raiz says of the faces on the wall, beneficiaries of the company’s Arise division that works with broad-based black economic empowerment entrepreneurs. “It’s not about them. It’s about their children,” he says. “Many of these people come from highly disadvantaged backgrounds and many of them are highly successful millionaires today. The first thing that happens once they become successful is they put their kids into a private school or university. For me, that’s where you break the poverty cycle.”

Those pictures are of Raizcorp’s BBBEE partners, but over 800 companies, varying in character, have graduated from its “Prosperator” programmes since Raiz founded the company in 2000. The Prosperator model offers support to businesses throughout their lifespan rather than only for a short period, like most incubator models. They get access to specialists across key business areas, a mentor, office space, financial advice as well as training and development.

There is a range of incubator models in SA trying to help entrepreneurs and it’s difficult to compare, says Nadine von Moltke, editor of Entrepreneur Magazine. What sets Raizcorp apart, she says, is that its partners usually stay much longer than those with other models, something of which the company is proud. Rather than charge a fee, it takes a 30% equity in its partners’ companies with no dividend and 20% profits, which is capped. Justin Spratt, CEO of Quirk Agency and formerly with IS Labs, says, “It remains to be seen which model is successful in South Africa,” but adds, “I would encourage more vehicles like it in SA.” He says one of the key obstacles is access to finance.

Raiz believes financing is available for innovative ideas and often it’s better to start with what you can muster, but he takes issue with SA’s labour laws. He wants the government to shift its focus from small-, medium- and micro-enterprises (SMMEs) to what he calls “the 10-man band”. Large corporations are shedding workers and one man operations haven’t proved themselves, says Raiz, so government should focus on helping organisations with around 10 employees expand to 100 employees. For that to happen labour laws restricting small firms’ ability to manage staff must be revised. Raiz should know, he’s helped hundreds of businesses grow.

He outlines five key attributes for an entrepreneur’s idea to spark. The first is an opportunity or crisis. “In every entrepreneurial story one of those two present.” Then they must be able tolerate pain and have an ability to handle rejection. They must be able to take a risk and believe in their own capacity to muster resources. “In other words, when you see this opportunity you believe you can bring people together to take advantage of that opportunity. For example, you don’t have to be a plumber to put a plumbing business together.” Finally, they must be able to learn and read feedback. Most successful entrepreneurs have some, not always all, of those abilities, says Raiz.

If South Africa is to increase growth and reduce unemployment, it’s essential those abilities are fostered. Creating a robust entrepreneurial and innovative economy is one of the key drivers of growth envisaged by the National Development Plan. Moeletsi Mbeki, at an economic freedom conference in 2011, said, “Entrepreneurship is first and foremost the freedom of individuals to express themselves in economic terms and thus economic freedom entails entrepreneurship.” Brian Kantor from the University of Cape Town said, “Entrepreneurship is what makes an economy work.”

He’s careful to dispel the idea that entrepreneurs are born and wants to debunk some common stereotypes. “It’s very interesting that there’s a myth that entrepreneurs take risks. When you look at the risks it’s a very special type of risk. It’s self-belief risk. If there’s a crevice and it’s death if they fall, they don’t say, ‘What is the risk if I jump that?’ They ask, ‘What is my state of fitness? How far have I jumped before?’ then they’ll take that risk based on their self-belief.”

Many of the lessons he uses to judge budding entrepreneurs and help them grow come from his own experience. In his early 20s he hit a crisis point. He was working for a friend and was featured in the newspaper for one of his initiatives. In 1991 an interested businessman contacted him and sponsored a new venture, retail hotdog chain the New York Sausage Factory.

New York Sausage Factory was sold after a year and Raiz went to work for a security vehicle firm. “I can’t speak for all entrepreneurs, but the majority don’t view failure as anything other than an opportunity to learn. That’s quite a clichéd response, but it is, ‘What did I learn from this? What can I learn from this? Where is the opportunity from this failure?’ It’s part of the process and they’re really not afraid of it.”

The New York Sausage Factory was a total failure, says Raiz. He vowed to pay the investor back even if it took his whole life. Yet the investor said he didn’t back the business, he backed Raiz. After he explained what he would do differently, his sponsor said he would continue to invest, but established a team to help cover his weaknesses.

“For me, that incident was pivotal because it was about someone believing in you opposed to the business. Someone believed in me. Raizcorp is a ‘paid forward’ for what happened to me. It’s how we find people and believe in them.” This extends right down to Faith, the hospitality hostess. She’s been one of Raiz’s longest-serving employees and deserves respect when she interrupts a meeting with tea and coffee, he says. It’s also an opportunity to evaluate the character of aspiring partners. Will they respect or ignore her? asks Raiz, a wall of successful entrepreneurs behind his shoulder. DM

Photo: Allon Raiz – taking the side of the entrepreneur. DAILY MAVERICK/Greg Nicolson.