The ANC Women’s League and the world’s oldest profession 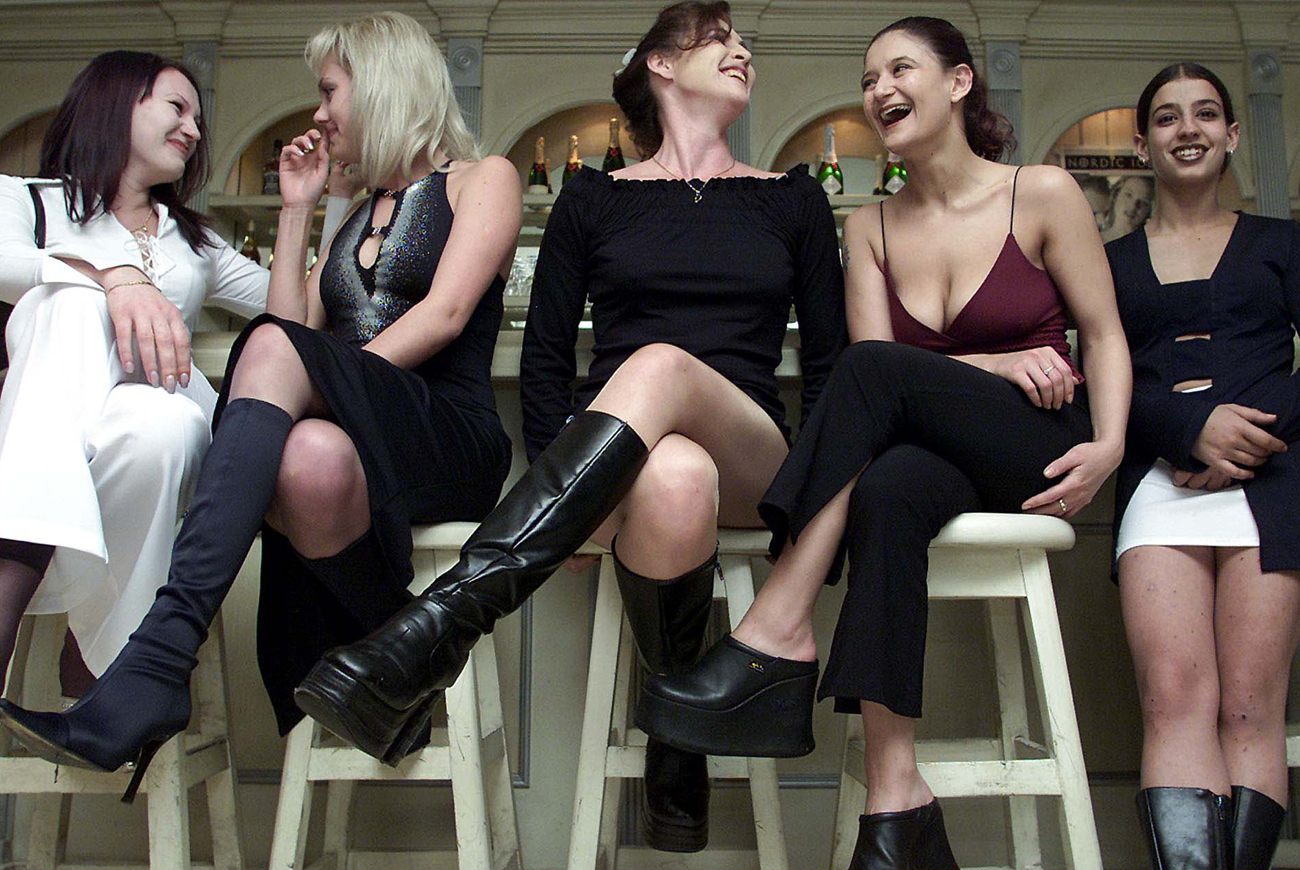 The ANC Women’s League confirmed this weekend some pretty oblique wording in its latest policy document translates to the fact it will push for the decriminalising of prostitution in South Africa at Mangaung. REBECCA DAVIS has a look at the re-opening of one of the most ancient debates.

It hasn’t been an easy ride for the ANCWL of late. They’ve been accused of allowing themselves to be overridden by the ANC Youth League, of being slavishly loyal to the ANC at the expense of women’s rights and of staying silent on issues that matter. The Sunday Independent claimed earlier this month the League was “in disarray and its provincial structures have collapsed amid divisions and infighting”. The Youth League in Gauteng accused the national leadership of “running the organisation like a spaza shop”, the newspaper said.

The accusations were angrily denied by leader Angie Motshekga, whose other hat is that of basic education minister, but criticisms of the ANCWL have not been limited to maladministration. In September last year the chairwoman of Sonke Gender Justice Network, Sisonke Msimang, hit out at the organisation for not issuing a statement on the nomination of Mogoeng Mogoeng following his “problematic” judgments about rape. “The League has gone off course,” Msimang said, accusing it of being “pulled into the increasingly worrisome discourse that puts racial solidarity over gender equality”.

On the other hand, when the League does take action, its exploits rarely garner as much interest as the ANC’s other arms. Last month’s march to the Noord Street taxi rank to protest against attacks on mini-skirted women received relatively little attention, as did the League’s release of a gender policy discussion document this month. The document was in preparation for June’s ANC policy conference, where policies are decided on to be ratified at the elective conference at Mangaung in December.

The irony of the document’s release at a time when the Women’s League is considered unstable is that its dominant message is that the need for a Women’s League in South Africa is as pressing as ever. Much of what is contained in the document makes for pretty depressing reading in its analysis of the progress made in South Africa towards achieving gender equality in various different arenas. From politics to corporations to private homes, South African women are still getting the short end of the stick. The most recent unemployment data, July to September 2011, show official unemployment among women is at 28%, as compared to 22.5% among men. Female-headed households are most likely to have an income of less than R750 a month. Only 10% of CEOs and board heads are female and women make up only 19.3% of executive management.

On all points, the League is clear on what it wants: for women and men to be treated exactly equally. Half of all beneficiaries of the industrial policy action plan’s job creation must be women, they say, in all sectors, which may be ambitious in fields like manufacturing and mining. Females must also receive 50% of tenders and contracts from state owned enterprises. To ensure these targets are met, they call for measures like women receiving training in creating business proposals and navigating tender and contract processes and the establishment of a training institute to help grow women-run cooperatives.

An argument likely to be levelled at the League is that pushing for absolute gender parity in the public and private sectors is all well and good, but fails to address the underlying causes of gender inequality in South African society. That said, the document does call for less quantifiable measures. “We need to decolonise our thinking, deconstruct the idea of patriarchy and begin to reconstruct a new way of thinking about gender equality as a norm,” it writes. This is ambitious stuff, but it must be acknowledged that it is part of the raison d’être of an organisation like the ANC Women’s League, which frames itself as “the struggle within the struggle”.

One part of the document which has a blink-and-you’ll-miss-it quality is that relating to “Prostitution and Trafficking of Women”. “The current legal framework on prostitution and sex work is total criminalisation against the seller”, but then it notes that some local governments turn a blind eye to prostitution after being appealed to by locals or NGOs. They note that the South African Law Reform Commission (SALRC) is investigating the issue of prostitution and has identified three major approaches: total criminalisation (as is the case now), regulation of the sex-work industry and total decriminalisation. The document stops short of explicitly identifying the League’s preference, but says: “The ideal approach for the ANC will be for the support of a position that will embrace the dignity of women”.

Treasurer Hlengiwe Mkhize confirmed that what it means by this is support for decriminalisation, and hopes to see a resolution passed at Mangaung decriminalising sex work. She also said the League expected an uphill battle.

Prostitution became illegal in South Africa in 1957 under a well-known piece of law called the Immorality Act, which changed its name to the Sexual Offences Act after the bit prohibiting mixed-race couples was removed in 1975. Reading the history of the act is fascinating because it acts as a kind of history of South African morality in itself. The part of the act which deals with sex work is Section 19, which makes it a crime to solicit in a public place “for immoral purposes” or to exhibit oneself in “indecent dress”. Section 15 of the act originally also prohibited sex with a female “idiot or imbecile”. Interesting parts of it were tagged on afterwards: in a moral panic responding to the permissiveness of the Swinging Sixties, 1969 saw the use of sex toys banned and the “men at a party” offence added, whereby it was a crime for any man to commit a sexual act at a party. (A party was defined as any occasion at which more than two people were present.)

Although the ANCWL highlights the issue of “total criminalisation of the seller” in the current legal status quo, the act of buying sex has also been illegal since an amendment to the act in 2007. In March of that year, however, erstwhile police commissioner Jackie Selebi made the suggestion that prostitution, together with public drinking, be legalised for the World Cup to free up police to deal with more pressing security issues. In February 2008 the suggestion was repeated by ANC MP George Lekgetho to the portfolio committee on arts and culture, albeit for slightly different reasons. “It is one of the things that would make it [the World Cup] a success because we hear of many rapes, because people don’t have access to [women],” he said. “If sex working is legalised people would not do things in the dark. That would bring us tax and would improve the lives of those who are not working.”

DA MP Sydney Opperman responded at the time: “You cannot attach a price to the deepest union between a man and a woman and link it to our tax base.” Though his objection seemed to be against “commodification” of the act, at its heart it was a moralistic response, as arguments against the decriminalisation of sex work often tend to be. Gender rights advocates counter with the idea that sex work is a human right. “If some people want to buy or sell sex, this is their choice and as long as no one gets hurt, the government has no reason to make that choice a criminal offence,” said Women’s Net group.

The second major argument in favour of the decriminalisation of sex work is that it is far more desirable from the perspective of public health. HIV rates among sex workers currently are estimated to be about four times the South African national average, with around one in five new HIV infections. Criminalisation of sex work is believed to fuel the pandemic, because illegal sex workers are less likely to have access to legal or medical resources or to seek help. There are other health and safety concerns about sex workers, of course: according to Sweat, the Sex Worker Education and Advocacy Task group, 12% of Cape Town’s sex workers reported having been raped by police in 2009.

Opponents of the decriminalisation of sex work, who choose not to take the moral argument route, often focus on the claim that countries which allow prostitution see an instant rise in human trafficking to that country. The UN said in 2009 that 79% of human trafficking is for prostitution, though it noted the statistics might be unreliable because sex trafficking receives the most attention. This point was raised by the Christian Lawyers Association of South Africa in 2009 in response to the SA Law Reform Commission putting out its discussion paper on adult prostitution. Incidentally, while the Women’s League says the Commission is “investigating new prostitution laws”, it is worth noting this investigation began in May 1996 and has not yet returned any report.

Those who support the decriminalisation of sex work in South Africa point to a country like New Zealand. Since 2003 the Kiwis have had some of the most liberal prostitution laws in the world after the Prostitution Reform Act was narrowly passed in parliament. The act meant sex work was recognised as legitimate work by Work and Income New Zealand (responsible for allocating unemployment benefits and helping people seek jobs), but they could recommend sex work as a means of ending employment.

A report on the results of the New Zealand act in 2008 found there was no increase in the number of sex workers on the streets and perhaps even a slight reduction. It also found sex workers were more willing and likely to report crimes against them. However, it determined that stigma against sex workers persisted as did violence. In 2010 three public health researchers released a book with further findings on the New Zealand situation, entitled Taking The Crime Out of Sex Work, which interviewed 772 sex workers and found them to be safer, healthier and more empowered.

The ANC Women’s League will likely be relying heavily on evidence such as this to make its case for decriminalisation in the build-up to Mangaung. It will have Its work cut out to counter the views of groups like the Christian Lawyers Association, which wrote in its submission to the SA Law Reform Commission “The laws of South Africa should be based on morality”. In response, the League may want to quote Sweat officer Mickey Meji: “However immoral one may regard sex work, surely long and painful lessons have been learnt in this country about doomed attempts to write the moral view of some into legislation applying to all.” DM

Photo: Prostitutes wait at a bar in a plush northern suburb of Johannesburg. REUTERS.