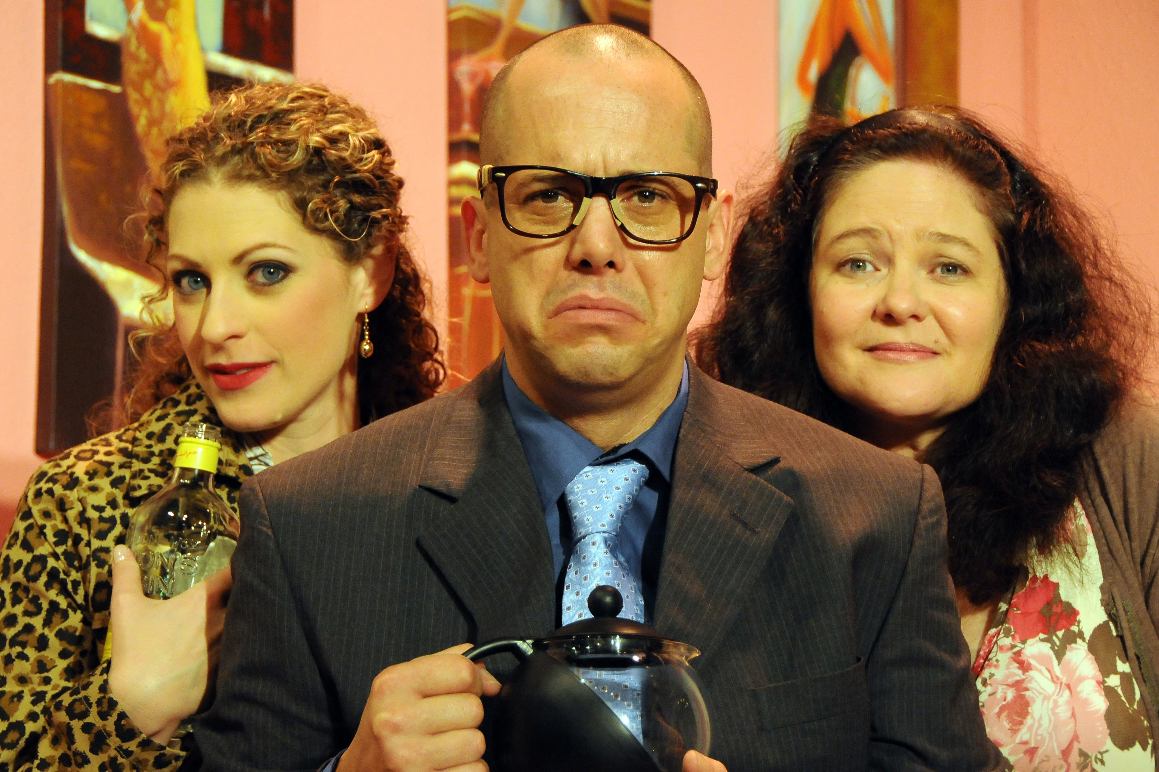 Farces are by definition designed to be farcical, but being a demanding kind of audience, I like them sophisticated too. By LESLEY STONES.

That might seem like a contradiction, but really it’s perfectly feasible. In between the groans and guffaws, the slapstick and stupidity, I want a few moments where I’m laughing at some intelligent wit as well as the action.

Put comic actors Alan Committie and Robert Fridjhon together on stage and you know the farcical element will ooze out in abundance. But what a relief to find that the plot of Funny Business is actually funny too. Not that the script written by Derek Benfield always features in the action. Committie and Fridjhon often veer off in a different direction completely – not always warning the other members of the cast first – to introduce some local humour or spontaneous thoughts that suddenly pop into their over-fertile brains.

The result had the first night audience of fellow thespians and media in stitches, in an atmosphere where the cast was largely performing for their friends. Director Alan Swerdlow may make them stick to the plot for the rest of the run, but probably not. The local deviances work well, and people wouldn’t enjoy Committie as much if his mouth wasn’t quite so maverick.

But back to the plot. Funny Business is set in a hotel in a dingy part of London, where the gauche and hopeless Ferris (Committie) is left in charge when his sister takes a holiday. As the guests descend, there are the inevitable mistaken identities, misunderstandings, secret trysts and unexpected arrivals.

The timing of the physical humour and verbal sparring is absolutely excellent, and the split-level stage setting by Jannie Swanepoel is also perfect, with a lobby below two bedrooms.

Committie and Fridjhon, playing a hapless would-be adulterer, steal the show, of course, although Carly Graeme is also delightful as a gin-sozzled vamp.

Young Clyde Berning as the athletic husband needs more practice in fending off the unexpected wit of his elders, too often cracking up himself rather than stoically carrying on or joining in the banter.

One thing that left me uncomfortable was the transformation of Mr Johnson (Neville Thomas) from a sick old man into a Viagra-fuelled lust-hound stalking the corridors, because that’s just too scary to contemplate and for me, too awkward to laugh at.

Jaci de Villiers as Judy was suitably uncertain as a dithery wife about to embark on a passionate adventure, but really the lesser characters are there almost as foils to the antics of the main two characters. So that’s what you get with Funny Business: a classic madcap farce pushed a little bit further over the top by two ridiculous but ridiculously good actors. DM