NZ vs SA Third Test - Don't rain on our parade

NZ vs SA Third Test – Don’t rain on our parade 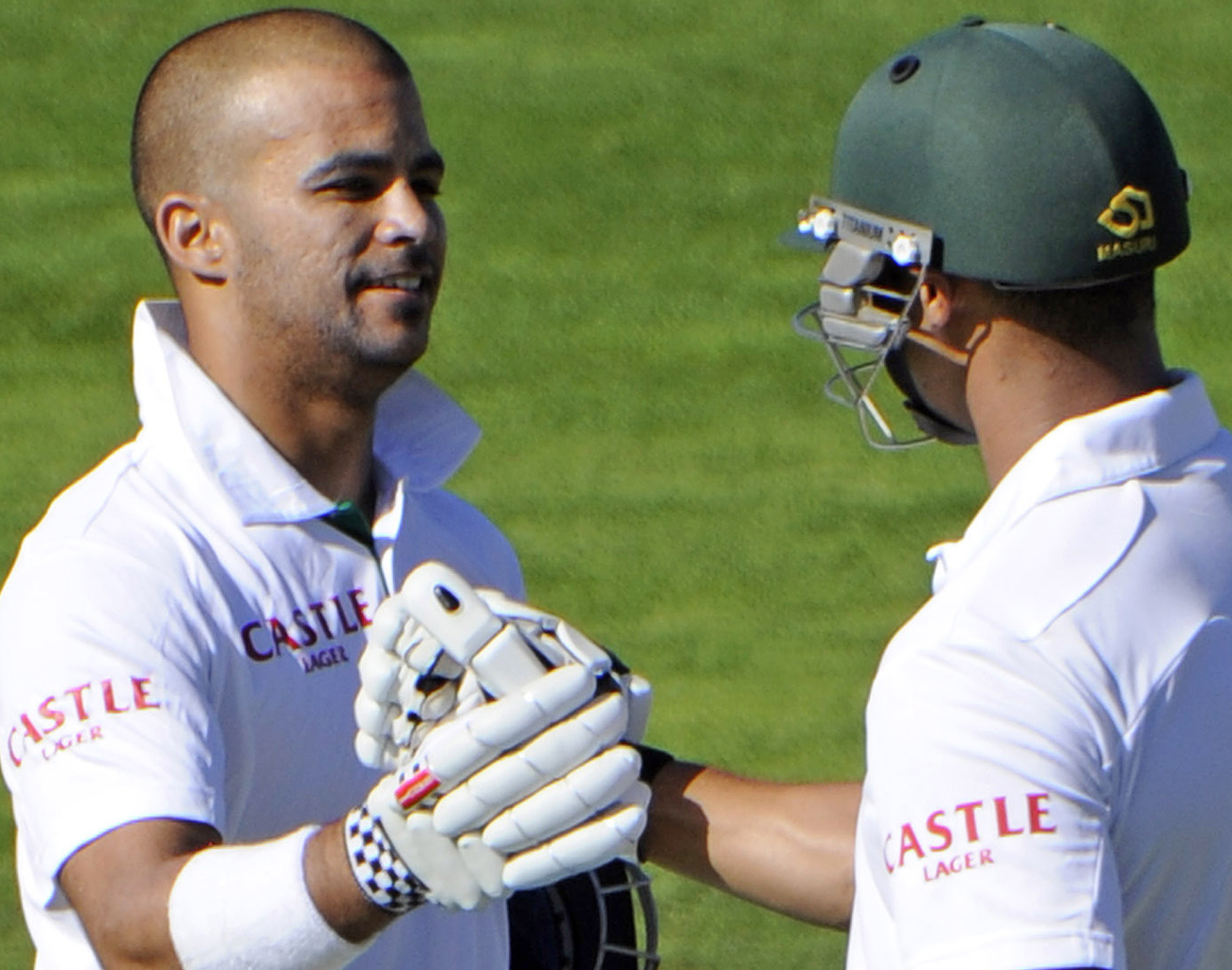 The Proteas’ summer holiday is into its final day. There’s still hope the tourists could force a famous victory and end the series 2-0, but the early rain might yet blunt the South African charge. By PAUL BERKOWITZ.

A rain-saturated Wellington ground came alive after tea on the fourth day as the Kiwi batting collapsed like an anaemic Victorian lady in a tannery. Thanks to some eleventh-hour pyrotechnics from Mark Gillespie, the hosts avoided the follow-on by just one run, forcing the South Africans to a second innings and use up more precious time doing so.

After losing the equivalent of a full day to bad weather, it looked like a drawn final Test was the most likely result. South Africa were put in to bat by the hosts on the first day and had to wait until close on tea-time to open their account. They only declared their first innings after tea on day three.

The Proteas had Alviro Petersen (156) and JP Duminy (103) to thank for their first-innings score of 474/9 declared. This should put paid to any talk about whether Petersen belongs in the opening pair and should move Duminy to the top of the queue if the middle order needs reshuffling. Gillespie was the wrecker-in-chief for the Black Caps, picking up six in the innings to go with his first-innings fifer in the previous match. For all his efforts he only ensured the Proteas were restricted to less than 500 runs.

In response, the Kiwi top-order applied themselves on a track with very little assistance for the bowlers. The opening partnership between Flynn and Guptil was 86 runs and the hosts were an effective 219 for four after lunch on the fourth day (“effective” due to the captain Taylor retiring hurt courtesy of a nasty blow to the wrist from a short Morkel ball. Scans later showed he’d fractured his ulna and won’t play further in the Test).

The introduction of the second new ball did the trick for the Proteas, helped along by some batting howlers from the Kiwis. Only three deliveries from the new ball brought results, with a  Brownlie top-edge off a Philander ball. A few overs later Williamson flirted with a Steyn delivery he should have left alone. Philander picked up two more wickets in one over, giving him his fifer and the record for the second-fastest 50-wicket haul in Test history.

The fourth musketeer of what some are calling the West Indian quickie quartet Mach 2, young Marchant de Lange, knocked off another wicket in the following over and Philander took his sixth and final wicket of the innings to skittle New Zealand for only 275 runs.

Smith and Petersen immediately set about flaying the Kiwi attack, which quickly retreated to the boundary rope and seemed happy to give away ones and twos. From talk (albeit a bit hopeful and crazy) from Kiwi supporters of a sporting first innings declaration and a crack at levelling the series, it now seems as if the hosts are happy to play for a draw. The Proteas ended the day at 75/0, 274 runs ahead.

Should Smith declare within 10 overs of the start of the final day, there’s a good chance of a South African victory, weather permitting and with a bit of luck in the field for the Proteas. The Kiwis are missing Taylor for the second innings. He and McCullum have been the city walls and the moat that have kept the marauding South African bowlers at bay for most of this series. Philander, Steyn, Morkel and De Lange will be polishing the battering ram and grappling hooks in anticipation of a storming of the castle on the final day. DM

Photo: South Africa’s JP Duminy (L) is congratulated by Alviro Petersen on scoring his century against New Zealand in the third and final international cricket test match of the series in Wellington on 25 March 2012. REUTERS/Anthony Phelps.