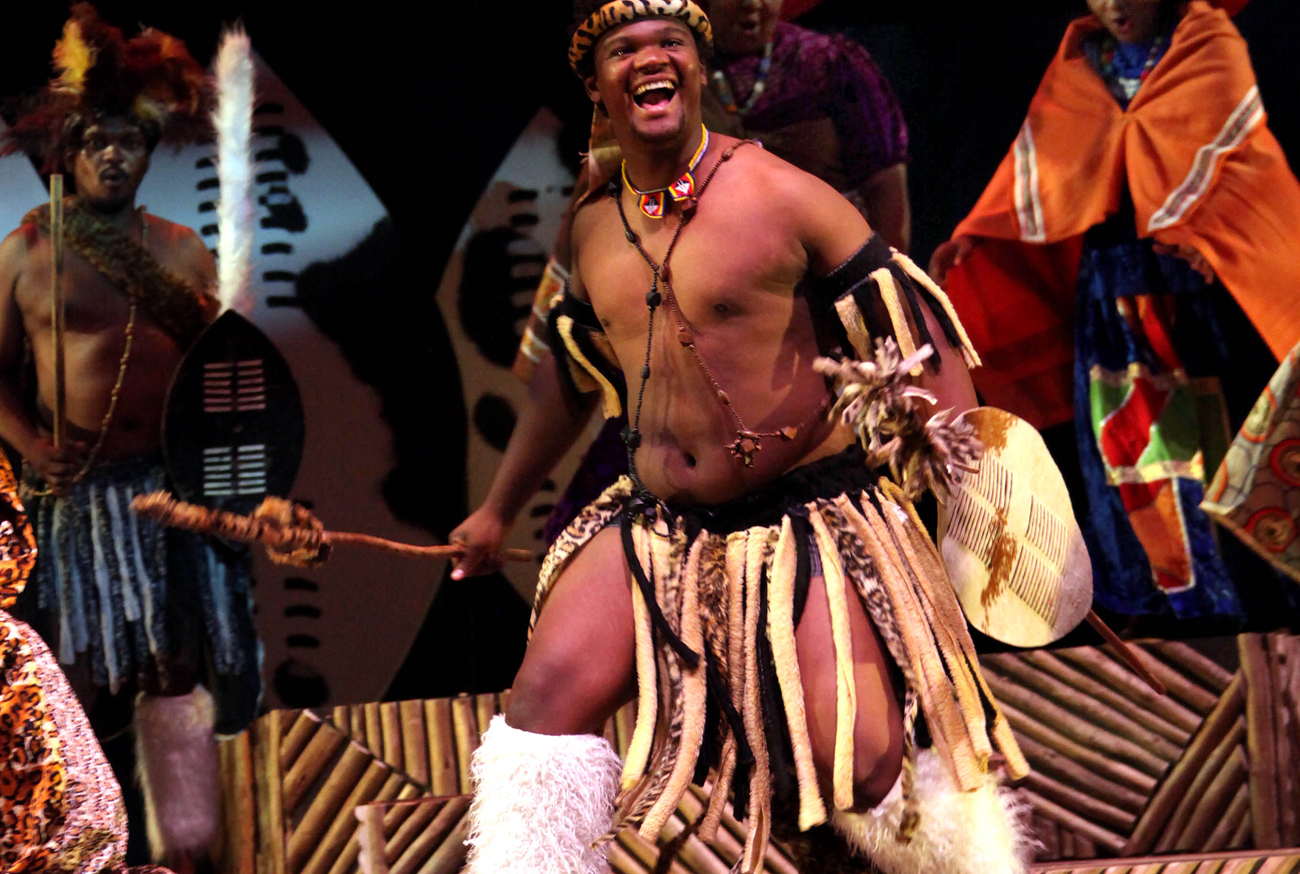 With a burst of new operas like Opera Africa’s newly-premiered Ziyankomo and the Forbidden Fruit and its young cast of wonderfully talented singers, South Africa may now be finding its own, distinct national operatic voice. By J BROOKS SPECTOR.

And for the newest effort to locate that authentic South African operatic voice, Opera Africa commissioned Phelelani Mnomiya, the popular gospel composer, to set yet another text by poet Themba Msimang to music. The result is the haunting work, Ziyankomo and the Forbidden Fruit. Msimang’s story takes place during the reign of Mpande, the Zulu king, when two young women in his seraglio have found other lovers.

Tragically, the customs of Zululand condemn the male suitors to death for this transgression of traditional law. Philosophically, this work is more than just a tale of the supremacy of tribal law over love. In “Ziyankomo’s” libretto the ancestors asks whether ancient customs are really so noble and right if they have thoroughly tragic consequences. This begins to sound a lot like a Zulu opera verismo, that late 19th and 20th century Italian musical movement that interrogated the lives of ordinary people – their trials, tribulations and dramatic downfalls.

For the past 200 years or so, an almost inevitable outcome of new nationhood and a revival of national feeling led to a release of energy for the creation of operas that would embody the soul of that nation. Even an international figure like Mozart eventually began composing operas in German – as a kind of bow towards a national language that did not yet have a nation.

Throughout the 19th century, European composers drew upon their national folk music and musical idioms for operas that demonstrated a vivid, boisterous national sense of self – giving the world works like The Bartered Bride, Eugene Onegin or Boris Godunov. And Italian composer like Verdi found opera was the perfect vehicle for awakened national feelings and pride as well as his ambitions for his then-newly united nation. Of course musical nationalism wasn’t just stirring national airs and dances. There have been darker moments too, such as Wagner’s operatic nationalism was one that opened the door to the cultural support for the rise of German fascism. And in America, a new society that might have seemed like infertile ground for indigenous opera, composers as different as Scott Joplin, George Gershwin, Aaron Copland, Gian Carlo Menotti, Leonard Bernstein, Anthony Davis, John Adams and Philip Glass and works ranging from Treemonisha, Porgy and Bess to Einstein on the Beach have tried to appropriate operatic concepts and tie them to some part of the American experience. Much of this effort has used an eclectic array of musical styles from jazz and spirituals to twelve-tone rows. And composers of works usually thought of as musical theatre like Jerome Kern’s Showboat or Kurt Weill’s Lost in the Stars have also attempted to occupy the space between the musical and opera.

Now, within the past few years, it may be the turn of South African composers to grasp cultural material suitable for a truly indigenous operatic style. A new company like Opera Africa, as well as a thoroughly transformed, older one like the Cape Town Opera have come forward with a purpose that is very different from the earlier goal of the old provincial performing arts councils, pre-1994, of preserving European high culture for a select few. These new goals are the thorough professional training of a new generation of wonderful voices – mostly African – as well as increasingly vigorous efforts to reach new audiences who may love music, but who remain unfamiliar with opera and its formal conventions.

First heralding this change, nearly a decade ago, Mzilikazi Khumalo’s Princes Magogo – with a libretto by isiZulu language poet Themba Msimang – burst on the South African and international musical scenes as a work that celebrated authentic Zulu musical traditions but marrying them to high operatic style. One of the nation’s leading singers, Sibongile Khumalo starred in the production. (And she was the daughter of music instructor, choral director and cultural entrepreneur Khabi Mngoma, who had been the original inspiration for Opera Africa). Besides performances in South Africa, Magogo has now been performed around the world as well, including performances at Chicago’s famed Ravinia Festival.

Princess Magogo chronicles the collapse of the Zulu nation and its revival through the preservation of its musical traditions by Princess Magogo Buthelezi. Especially in its most recent staging, Magogo has the kind of majesty that imparts a sense of reverence towards South African history even as it is at home with the conventions of operatic nationalism – the grand themes, a reach back to traditional melodies and musical idioms, and a lush celebration of a culture.

In the meantime, two other works, Winnie and the revised version of Mandela Trilogy received popular attention in 2011. Winnie, composed by Bongani Ndodana-Breen, re-imagined Winnie Madikizela Mandela somewhat like a combination of those tragic heroines, Tosca and Lucia de Lamermoor, but as one who will live to fight another day – right to the end.

With Mandela Trilogy, three composers, Allan Stephenson, Mike Campbell and Peter Louis van Dijk each composed one act of a work that had a hagiographic, biopic texture, but was still an intensely moving portrayal of Mandela’s life from young adulthood to his apotheosis as the newly-freed liberation figure – in which the role of Mandela was sung in the final act with real power and authority by Aubrey Lodewyk – clearly contributed to it receiving a Naledi award, Johannesburg’s answer to the Tony, for 2011’s best musical performance. Photo: The three gossips in Ziyankomo.

In this new Opera Africa production, Ziyankomo is paired with eight extracts from Opera Africa’s productions over the past 18 years – including Pagliacci, The Magic Flute, Faust, Carmen, La Boheme, Rigoletto, Princess Magogo, and La Traviata. Ziyankomo has a simple yet evocative set and costumes that firmly situate the action in a colourful yet stripped down, abstracted setting, while the extracts make use of a simple, adaptable set that quickly shifts from being a Renaissance ducal palace to a Parisian garret. But it is the singing that really makes the evening. Opera Africa’s well-drilled singers are young and exuberant – and most are well under the age of 30 as they bring their energies to these quickly changing moments on stage.

This company’s newest star, Kelebogile Boikanyo, is just 24 years old but she has already become the Standard Bank Young Artist Award winner for music this year. Throughout this evening, Boikanyo demonstrates her range, technique and versatility, first singing the female lead in Ziyankomo and then famous arias from Faust, Rigoletto and La Traviata. And Fikile Mvinjelwa – now singing with the Metropolitan Opera in New York City – takes the role of Mpande in Ziyankomo as well as singing many of the extracts as well. Given Nkosi and Goitsemang Lehobye, among their other appearances, give a winsome, poignant rendition of Puccini’s duo in La Boheme when Mimi and Rudolfo first meet in his frozen Parisian loft.
In fact the entire cast sings beautifully throughout the evening and the Johannesburg Philharmonic Orchestra, under the direction of American conductor Timothy Myers, supports these extracts with real sensitivity. Paul Ferreira plays the piano accompaniment for Ziyankomo. Although orchestral accompaniment had originally been planned for this new work, in the end it became piano accompaniment but the fascinating thing is that because of this more intimate sound, the singers can be heard to great effect in what becomes a kind of operatic chamber performance. Music like Mnomiya’s, as with Khumalo’s, is an effort to meld South Africa’s traditional musical idioms with western operatic conventions. In Ziyankomo, Mnomiya has drawn on African rhythms, the sounds of church and gospel music, and even some Baroque ornamentation to craft a wonderfully intriguing aural mixture. This latter influence is not really surprising, however. South African choirs have been singing excerpts from Handel’s great works like Xerxes, The Messiah and Judas Maccabeus for over a century and it shouldn’t really be very surprising Mnomiya has drawn on their power and married it to his own individual musical ideas.

The future challenge is for South African composers like Mnomiya, Ndodana-Breen or even a Philip Miller (who has worked on filmscores as well as his remarkable cantata, Rewind) to bring together the country’s many musical traditions – from its traditional instrumental sounds to the nation’s unique jazz traditions and its wide-ranging vocal repertoire – even as they draw upon contemporary international musical ideas, experiments and innovations. In time, this may well evolve into an internationally recognised South African answer to the question of what makes a musical work both local and universal. DM

Ziyankomo and the programme of operatic extracts continue at the Joburg Theatre on 25, 29 and 31 March. All photos by the Ziyankomo production.