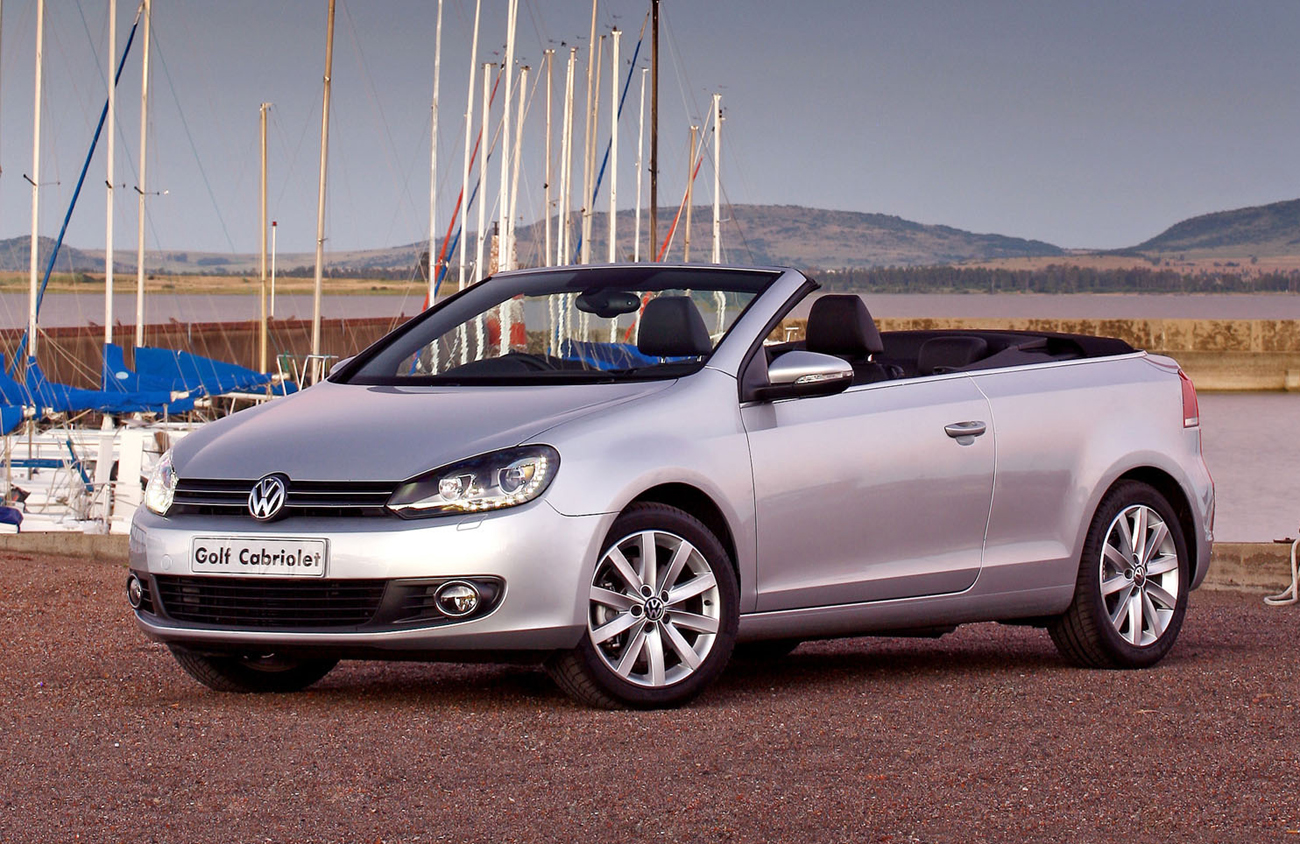 South Africans have always enjoyed convertible cars. And as far as affordable drop-tops go, Volkswagen’s Golf-based Cabriolet has typically been a popular choice, despite a dearer asking price. It’s taken a long time to arrive, but finally, the latest-generation Golf is now also on offer as a sunshine model. By DEON SCHOEMAN.

Convertibles are most often associated with either expensive grand tourers, or even more expensive exotic sports cars. But the Golf Cabriolet is neither grand nor exotic, and while it’s hardly a budget beater, it’s certainly not burdened by the kind of price tag only lotto winners or politicians can afford.

In other words, it’s a more accessible ragtop than most, and also brings with it the established attributes of the mainstream Golf hatchback.

As one of the better iterations of the famous nameplate, the Golf 6 provides a solid platform for this cabriolet version. It looks more glamorous than the hatchback, and offers all the attractions of wind-in-the-hair motoring, yet retains the more pragmatic values of its tin-top sibling.

The irony is that South Africa’s sunny weather is often too hot to drive with the top down. And the more paranoid among us may be worried about how secure one is in an open car. But there are occasions when the scenery, balmy weather and a twisty road conspire to make for a perfect convertible experience.

Of course, the roof is a key player in this scenario. The Golf Cabriolet has a fabric hood that stows away in only 11 seconds at the push of a button, and can be erected even faster: nine seconds, to be exact.

A lot of effort has gone into ensuring a smooth, aerodynamically efficient roofline that not only looks good, but is also less prone to wind noise. Not only does the roof open and close in less time than it takes to adjust your designer sunglasses, but it can also be raised and lowered while on the move, at speeds of up to 30km/h.

Top up or down, the Golf Cabriolet looks handsome enough, emphasised by the sportier two-door layout, the high waistline and the pert, high rear deck. The cabriolet also gets a more steeply raked windscreen, partly to better protect its occupants from the slipstream’s buffeting. Photo: The VW Golf Cabriolet is racier than the standard model.

The rear is perhaps the least flattering view: that high deck can look awkward and heavy from some angles, because it has to accommodate the roof when folded down. The boot is boxy and awkward to access, but offers enough space for a couple’s long-weekend luggage.

While the canvas top creates a clean enough roofline when raised, the Cabriolet looks at its most desirable with the hood stowed away.  And it’s certainly racier than the standard model.

The Golf Cabriolet line-up offers a choice of two TSI engines. Both have a 1.4-litre capacity, and both are fitted with turbochargers. The junior version is good for 90kW, but the one to get is powered by the 118kW version of the same four-cylinder unit. Torque peaks at 240Nm.

The difference between the two engines is the addition of a supercharger to the turbocharger in a configuration VW calls TwinCharge.

The twin-charge engine feels beefier than its modest capacity suggests, and suffers none of the lag often associated with small, force-fed power units. The seven-speed DSG gearbox makes it even easier to take full advantage of the four-cylinder’s potential.

The result is a car that feels swift and responsive, with just enough brio to add some sporty flair to the overall driving experience. The throttle is more sensitive than expected, and pulling away with too much gusto will make the tyres chirp, but the overall effect is lusty and athletic.

Those familiar with the Golf 6 hatchback’s interior will immediately feel at home in the Cabriolet’s cabin, which is very similarly configured. There’s the same sense of tactile quality, linked to a decent level of standard specification.

Safety remains a critical element of any open-top car, and the VeeDub offers everything from a plethora of airbags to active rollover protection, the latter achieved via two pop-up hoops installed behind the rear seats.

Accommodation is both comfortable and luxurious, with high levels of tactile quality and an extensive list of standard equipment. The seats, in particular, deserve praise for offering both form-hugging support and costing comfort.

Leather upholstery is included, together with a decent sound system, air-conditioning, remote central locking, electric windows and mirrors, and a trip computer.

Those intent on spicing up their Golf Cabrio can do so from a list of added-cost items that includes full-colour navigation, fully automatic climate control, Bluetooth connectivity, a rear parking camera, and Xenon headlights with LED daytime running lights.

However, ticking all those options boxes can be an expensive exercise, easily adding almost R50,000 to the car’s asking price. The satnav alone will se you back just short of R30k – and frankly, a Garmin or TomTom will do the job as well, if not quite as elegantly.

There are some practical reasons to admire this drop-top Golf, too: Volkswagen claims that the Cabrio’s interior is the longest in its class, allowing rear seat legroom of up to 833mm. Access is made easier via the wide-opening doors and front seats that slide forward.

In reality, though, it’s still inconvenient to get in and out of the rear. And accommodation on that split rear bench seat is adequate, rather than generous. Photo: Volkswagen claims that the Cabrio’s interior is the longest in its class.

It may be sexy to look at, and kitted out nicely, too. But it’s on the move that the open-top Golf really rewards its driver. That 118kW maximum output may sound a little modest for the Cabrio’s 1,484kg kerb mass, but even so, the car offers brisk performance.

Volkswagen credits the drop-top with a zero to 100km/h time of 8.4 seconds, and a top speed of 216km/h. More importantly, the Golf feels sprightly and enthusiastic off the mark, and surprises with its composure and refinement, even when pressing on.

Indeed, perhaps the most impressive aspect of the Golf Cabrio is its handling. Convertibles generally suffer from a measure of scuttle shake, but this Golf seems to take little notice of its cabrio status: it feels as sure-footed and robust as its hatchback stablemate.

A substantially reinforced body, especially as far as the windscreen, the underbody and the side panels are concerned, has allowed an impressive level of rigidity. It’s also the reason why the Cabrio is on the podgy side.

But the upside is the thoroughly enjoyable driving experience, helped along by crisp turn-in and almost no body roll. All the more’s the pity that the steering lacks feedback, and ends up feeling a little remote.

Somehow, the Golf Cabriolet has always been considered a lady’s car – perhaps because it’s the kind of babemobile you often see parading past the pavement cafes of Camps Bay, or cruising the boulevards of Ballito.

But this latest version deserves better: it’s a thoroughly modern and ultimately desirable car that turns heads and offers an entertaining motoring experience. The pricing may appear a little dear, especially when loaded with options, but the mix of space, quality and all-important glamour make for a convincing overall package. DM Photo: All-in-all the VW Golf Cabriolet is a worthwhile buy.