Vigilante violence: the smoke that calls 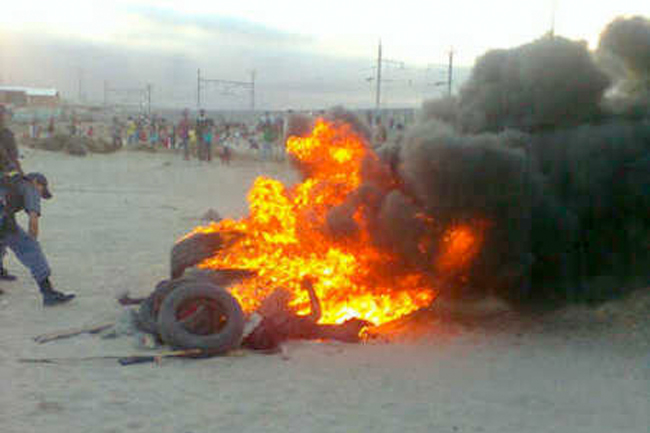 Three men died gruesome deaths in the impoverished Enkanini informal settlement in sprawling Khayelitsha, South Africa’s fastest growing township, which nestles alongside the N2 on the Cape Flats. As headlines indicate the community supported the vigilante justice and with four Khayelitsha residents in court for murder, Daily Maverick looks at reasons why. By MANDY DE WAAL.

“The people would have tried peaceful means before resolving issues using violence. Violence isn’t an alternative. It is a cry of desperation,” says clinical psychologist Nomfundo Mogapi, who manages the Trauma and Transition Programme at the Centre for the Study of Violence and Reconciliation (CSVR).

Mogapi was trying to help Daily Maverick make sense of why the three men accused of robbery in Enkanini were stoned, had tyres put around them and were set alight. This vigilante violence comes days after police found the bodies of three men on sand dunes in Macassar, who were kidnapped, tortured for hours and then killed after being branded thieves.

“The title we used for the research we did was The Smoke That Calls. We used this because during our research people said to us: ‘We feel that violence is the only language that this government understands. They will only come when they see the smoke’,” says Mogapi about research done by the CSVR last year into why people engage in collective violence.

Mogapi says vigilantism is an indicator of communities getting increasing despondent about government, failed service delivery and who are losing hope. She says the charred bodies in Khayelitsha are a signifier that people feel they have exhausted all avenues of communication, and that the only language that will “work” is violence.

“There is an increasing sense from society that the only language our government and society understands is violence,” says Mogapi. “When there is violence there is a huge reaction from society, whether it be the media or government at large. When people try peaceful ways of raising their issues, there is usually a very limited response.”

The CSVR research that Mogapi is basing her comments on is “The smoke that calls: Insurgent citizenship, collective violence and the struggle for a place in the new South Africa”. Released last year in conjunction with the Society, Work and Development Institute (Swop) at Wits, the study is a collection of case studies into collective violence that covers community protests, xenophobic violence and vigilante justice.

“Communities where xenophobic attacks or service delivery strikes occur also tended to have high levels of vigilante violence,” Mogapi says. “Our research showed that people are getting increasingly frustrated with the systems that are supposed to assist them, whether it is the justice system that is supposed to apprehend the criminals, or local government that is not providing services.”

ANC councillor for Khayelitsha in the Democratic Alliance-controlled City of Cape Town, Andile Lili, says anger is behind the violence. “People were very angry because it was not for the first time that these three guys had stolen,” says Lili. “They were killed because it was the second time. These men were actually given an opportunity to tell the truth before they were killed. But unfortunately they were not ready to provide the truth as to why they stole, and where the items that they stole were.”

Lili says people living in Enkanini are desperate. “The condition of the people of Enkanini is very bad. There is no water or sanitation. They live with poverty and the unemployment is too high. The people have lost hope that the government will one day do something for them. The anger of those people from Enkanini is coming from far,” he says, adding that he worries about what will happen to this rage if the poverty and service delivery issues aren’t addressed.

“The other issue is that our government here in the City of Cape Town is saying that they are always better than the other cities. But the worst part is that in Enkanini the DA don’t take care of our people. If the DA was taking care of these people then the vigilante violence would not have happened,” he says.

Service delivery issues aside, Lili sketches the picture of an informal settlement where visible policing is completely absent. “The police aren’t committed so people decide to take the law in their own homes. The vigilante violence wouldn’t have happened if a police van was visible in the community. There is a van that is supposed to be in that sector day and night, but it is not there or it is not visible. The killing took about 45 minutes because those people were questioning the young men to find out where the stuff they stole. If the police were visible in Enkanini, that incident wouldn’t have happened.”

Lili says poor communities like Mitchell’s Plein and Khayelitsha are prejudiced by the City of Cape Town, and more affluent areas like Claremont, Platekloof, Sea Point and Green Point get preferential treatment. “Even the DA members who are living in Khayelitsha, they are only there as puppets. The only thing these DA councillors share with us is that they get paid too little money.”

Ernest Sonnenberg, mayoral committee member for human settlements says the City of Cape Town takes the allegations raised by Lili very seriously. “The department of human settlements has identified more than 10 informal settlements to be upgraded, Enkanini is one of these. This means that Enkanini will become a formalised area.”

Sonnenberg adds that City of Cape Town mayor Patricia de Lille has been working directly with Eskom to expedite the provision of electricity in Enkanini. “Enkanini is an Eskom supply area and this role out is due to commence in the next few months,” Sonnenberg says, adding that the department of human settlements would investigate the grievances voiced by the people of Enkanini “as a matter of urgency” to communicate “to the community of Enkanini that they are a priority area for service delivery within the city of Cape Town.”

However for many other communities the hype of democracy, the reality of poverty and the loss of hope remains a motivator for collective violence. “There are a certain group of people that have benefitted from democracy, but there are millions of others that are feeling completely marginalised and their lives either haven’t changed or are worse than before,” she says, adding that in communities hope is dying, but a strong sense of entitlement remains.

“You have great policies and laws but they are not being translated into changing the lives of ordinary South Africans, they are not creating a shift in the lived experiences of South Africans,” she says, adding “It is mostly local government that is responsible for this.”

Another important means of trying to eradicate collective violence would be for local government to meet with communities and to explain how processes work. “Sometime the issue of vigilantism can happen merely because people don’t understand how the process of bail works. People see a criminal out on bail and think that the person has been declared innocent.”

Mogapi says a strong message must be sent to communities to ensure they understand the long-term consequences of vigilante violence. “It may be a short-term solution in that it works, it scares people off and government responds, but when communities use such gruesome violence it feeds into more violence.”

Young children live in places like Enkanini. They walk home past these dead bodies. The big question South Africans should be asking themselves, Mogapi states, is what kind of society are we creating? DM