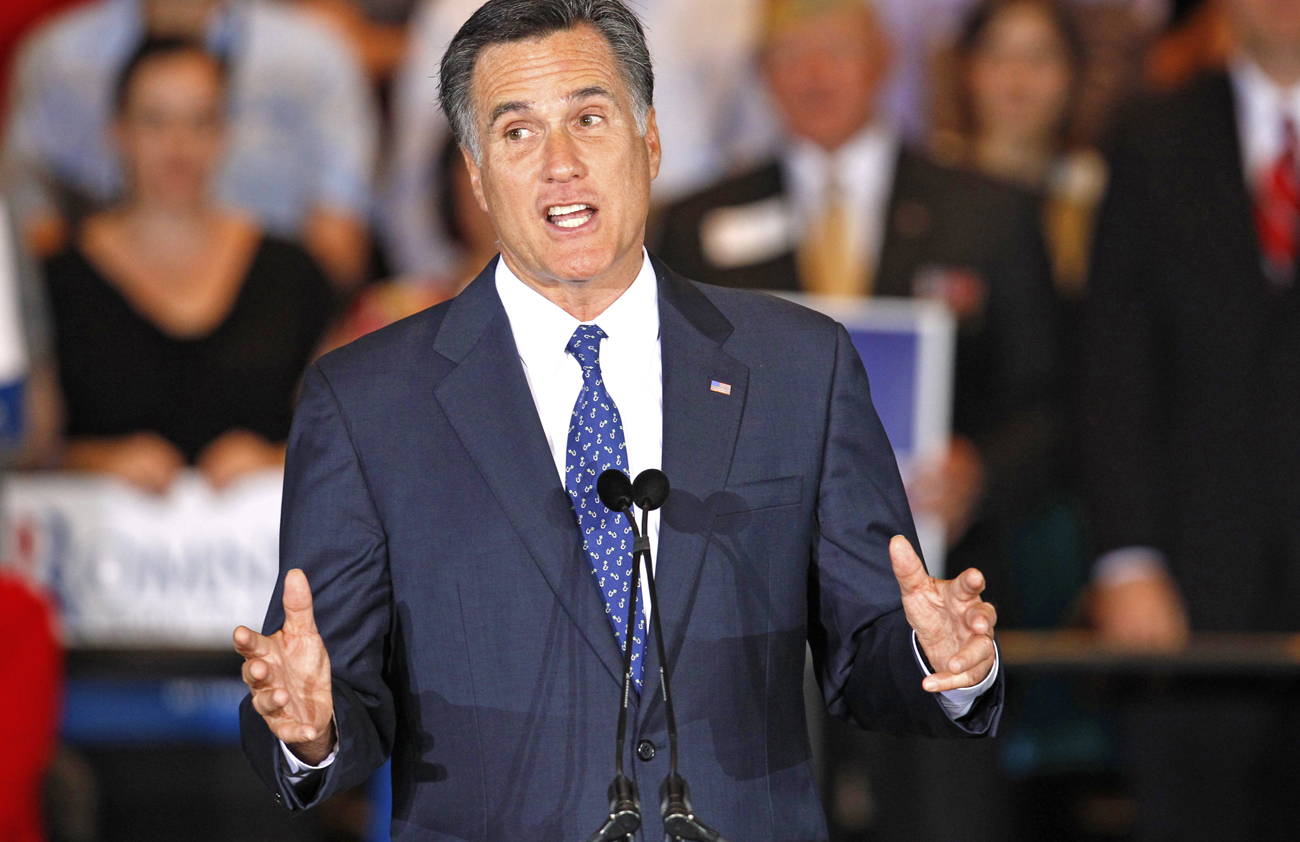 The whitest of the white knights who had increasingly been implored by Republican back-roomers to jump into the presidential nomination chase this year to save the party from enduring additional months of infighting and bar-room brawling has now had his say. But, it wasn’t to announce he was joining the race. Not by a long shot. By J BROOKS SPECTOR.

Instead, former Florida governor Jeb Bush – brother of one former president and son of another, and about as blue-blood as you get in today’s Republican Party – announced on Wednesday “Primary elections have been held in 34 states, and now is the time for Republicans to unite behind Governor Romney and take our message of fiscal conservatism and job creation to all voters this fall.” Bush added “I am endorsing Mitt Romney for our party’s nomination. We face huge challenges and we need a leader who understands the economy, recognises more government regulation is not the answer, believes in entrepreneurial capitalism and works to ensure that all Americans have the opportunity to succeed.”

These are definitive words – no turning back from something like this. Combined with Romney’s substantial victory in Illinois, and his continuing, growing lead in rounding up actual delegates committed to him for the August Republican Party convention (he now has a little over half the needed total), will mean an inevitable stampede towards the Romney camp by many other lesser Republican politicos, all eager to be on the winning side in what has been a drawn-out, frustrating and increasingly angry intra-party battle.

Of the just-completed Illinois primary, Slate commented it “was a laundry day for Mitt Romney. He washed his shirt in the sink and then took Rick Santorum to the cleaners. The former Massachusetts governor beat his closest rival handily, 47% to 35%. It was the first no-caveat, everyone-is-watching, takes-place-in-a-location-you’ve-heard of contest that Romney has dominated since his victory in Florida two months ago.”

Following on this victory in Illinois, Bush’ unequivocal statement will have taken the heart out of Romney’s chief rivals – Rick Santorum and Newt Gingrich – both of whom had been jockeying for a deadlocked convention where the actual selection of a nominee could be swayed by appeals to feelings on dog-whistle issues and appeals to emotion, following a first, inconclusive ballot.  But this is not going to happen unless some truly unanticipated fact about Romney’s personal life suddenly comes to public notice in the weeks ahead – something unlikely to happen after all the opposition research that has been done on him from 2008 onwards.

Earlier in the week, Mitt Romney had won a near absolute majority of Illinois Republicans voting in the latest primary contest. As a result he has also captured a majority of the state’s delegate count. That, plus an earlier compelling victory in a more minor primary in Puerto Rico (while the island doesn’t actually vote in the general election for president in November, that victory could have some weight on Hispanic American voters, come November), and with the Jeb Bush endorsement on the board, all makes Romney the prohibitive favourite – for the Republican nomination, that is. The November election is a decidedly different story.

Earlier, just prior to the Bush announcement, presidential campaign chronicler Mark Halperin had written in Time magazine of Romney’s future strategy in securing the nomination that “Romney’s Illinois win could be the beginning of the end of the Republican nomination fight. In order to get there, he faces two challenges: He’ll have to convince on-the-sidelines Republicans to endorse his candidacy, contribute to his campaign, and muscle Rick Santorum and Newt Gingrich out of the race. And he’ll also have to persuade the media to reflect the reality that Romney is the only candidate who can win … Santorum probably has one more chance to change the paradigm with a win in Wisconsin on April 3, after an expected victory in Louisiana on Saturday.” Now, almost on cue, Jeb Bush has stepped forward to help Romney carry out the first part of Halperin’s challenge.

The New York Times’ handicapper in chief, Nate Silver, writing of the Romney way forward, points out the earliest he could clinch the nomination is 22 May, after the Arkansas and Kentucky primaries. Of course this would mean Romney would need to win at least 95% of the delegates in Arkansas, Kentucky, Louisiana, Wisconsin, Maryland, Connecticut, Delaware, New York, Pennsylvania, Rhode Island, Indiana, North Carolina, West Virginia, Oregon and the District of Columbia, and to receive endorsements by virtually all of the Republican Party’s 77 undecided super-delegates by that time. So his victory lap may come a little later than the end of May. But still, it’s gonna happen.

One note of caution on this endorsements business is that as a general rule, endorsements would not easily translate into wins in the remaining upcoming primaries, let alone for the general election. However, with this Bush endorsement, it has become a very clear signal to the rest of the party (and something that almost certainly didn’t happen out of the blue, all by itself, and without some phone calling by Bush to other grand panjandrums in the party) to come together and avoid further bad blood – especially to those social values party activists who had been most vociferous in denigrating Romney’s bona fides as a true conservative Republican. This also signals an effort by Republicans to end their self-destructive intra-party competition that has clearly been giving Democratic president Obama’s re-election campaign rafts of material to build on for the general election campaign to come.

In the wake of this announcement, readers should expect Santorum and Gingrich to attempt to shrug off this electoral thunderbolt. Santorum will say some variation of: “I deeply respect Jeb Bush and know he cherishes the fate of our party in the election to come, but I am running to honour the loyalty of the millions of ordinary people who deeply worry about the moral tenor and fibre of our country’s leadership” or words to that effect. Expect his words to have less and less effect, however.

And Gingrich will come out swinging, full of Newtian bombast: “I am running as the candidate of big ideas; the one man in the race who understands what the country needs in its most important election since 1788, 1860 or 1932. The party and the nation need a man of vision – and I am that man.”

And then both of them will go into prolonged sulks that will only be assuaged by private offers of prime spaces during the convention to speak to the delegates – and maybe offers of leadership of some high-sounding commissions to clean up the country’s deteriorating moral values and promulgate those big ideas.

But fold, they both will because they don’t have the cards in their respective hands to win this game. Soon enough they will no longer have any real prospect of gaining new contributions to fund their respective campaigns. And this is the crucial point. If the big fund raisers and contribution bundlers, the direct campaign contributors and the Section 527 superPAC supporters – even someone like Sheldon Adelson (a gambling man who has rarely backed a losing bet, mind you) – see further contributions to Santorum/Gingrich as good money after bad (and if Romney’s organisation and supporters can hammer home the point as well), then the two campaigns will shrivel up to empty husks.

Back in 1983, Louisiana governor Edwin Edwards had memorably declared, “The only way I can lose this election is if I’m caught in bed with either a dead girl or a live boy.” Times handicapper Silver argues that, now, “We’re getting close to the point where it might take a major revelation for Mr Romney to lose, something that substantially and permanently alters the way voters view him.”

Sooner or later, then, Santorum/Gingrich will wake up, smell that designer coffee, and make their own separate announcements that to ensure the defeat of that radical-Kenyan-born-socialist-secret-Moslem-apologiser-in-chief-leader-from-behind-pretender in the White House they, too, will support Romney with their hearts and souls. And they’ll do this even if they have to cross their fingers behind their backs with one hand, grimace hard, and hold their noses closed with the other hand. And then it will be “game on” for November. DM