Lebanon: The suffering of Alem Dechassa 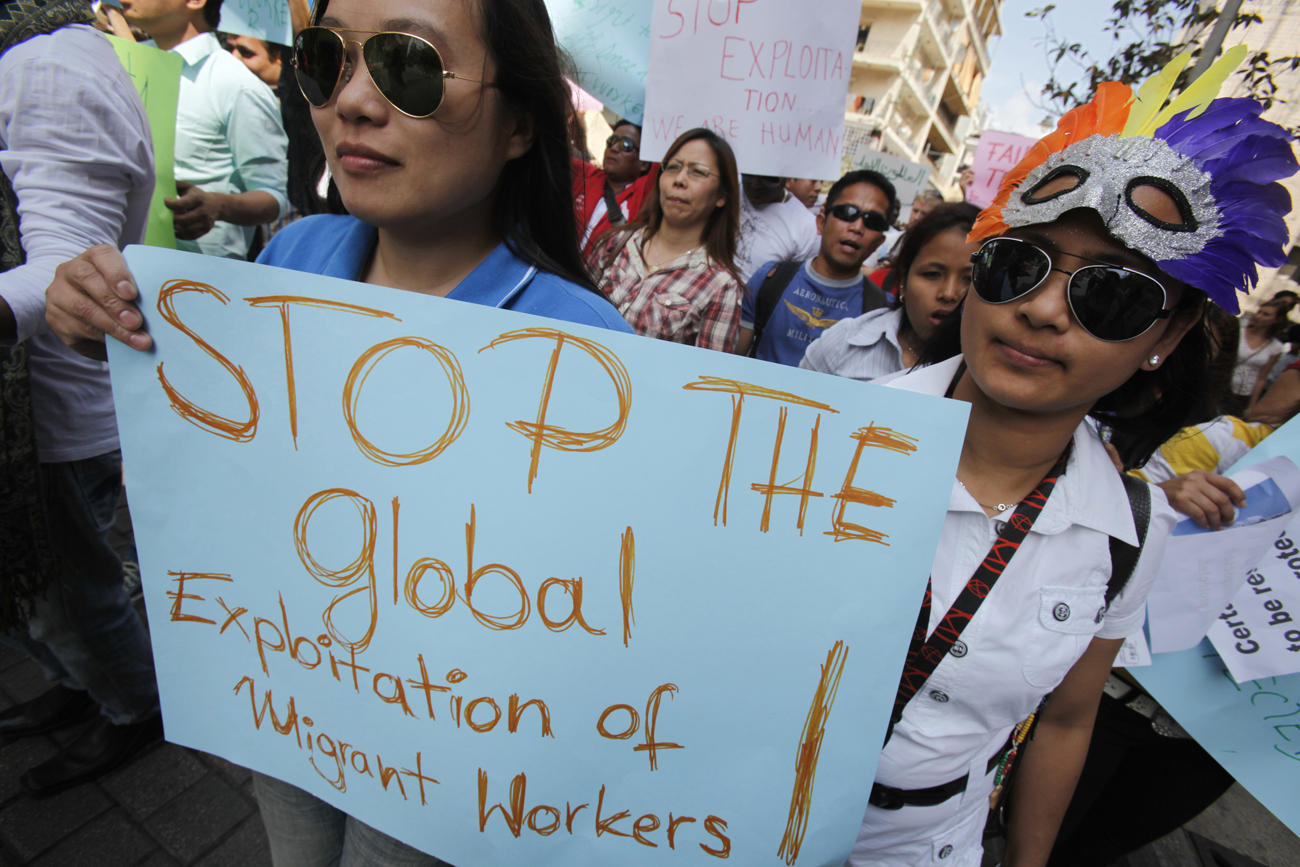 In 1915, as the world careened yet further into war, American novelist Henry James noted that the images of suffering filling the newspapers everyday had rendered people wordless, without the means to make sense of the unspeakable horror. Speaking to The New York Times James said, “One finds it in the midst of all this as hard to apply one’s words as to endure one’s thoughts. The war has used up words, they have weakened, they have deteriorated…” There’s been far more suffering, so much more unspeakable suffering served to us in the news since. And in the sheer multitude of daily reports and depictions of suffering there remains the burden of suffering that must be felt away from the glare of the camera.

Alem Dechassa was a 33-year old Ethiopian domestic worker in Lebanon. Her suffering has restarted the tired debate on the rights of migrant workers in Lebanon and the rest of the Arab world. Two weeks ago, a video surfaced online showing Dechassa being abused outside the Ethiopian consulate in Beirut. For over a minute we watch Dechassa callously kicked, beaten and dragged by her hair. Eventually she’s forced into a black BMW. As she cries out helplessly, she’s ordered to shut up. The chorus of onlookers do little to help her. They implore the man beating her to leave her alone. No one ventures to help her. No one ventures to intercede for this woman. We wonder what further punishment awaits her as she is stuffed like a lifeless doll into the back seat of the car. We wonder what is her crime.

As the video made its way to Lebanese national television, Dechassa’s plight inspired outrage in Lebanon and across the Arab world. Once more the plight of migrant workers the region was brought under intense scrutiny. We now know that Dechassa’s assailant was a labour broker. She was employed by his agency. She’d only been in Lebanon for three months but she’s now been described to have been in a fragile mental state. She is said to have refused deportation back to Ethiopia, but the video attests, she certainly did not want to return to her place of employment.

Lebanese police eventually placed Dechassa in the Psychiatrique de la Croix Hospital. Last Wednesday she hanged herself using her bed sheets. And as one individual’s suffering becomes the latest martyr in the scourge of worker abuse in the region, attention has now turned to Dechassa’s attacker. Lebanese television channel LBCI used the car’s license plate number to trace him.

“[The man] tried to justify his act by denying that he beat her. He stressed that the worker tried to commit suicide more than once, and that he tried dealing with her humanely, but she refused to go to the airport for deportation,” LBCI reports on its website. He has been identified as Ali Mahfouz, who according to Lebanese media was briefly arrested last week, but was released after leaving his address with the magistrate.

Mahfouz claims he was trying to take Dechassa to the airport, to send her back to Ethiopia when she resisted. He says she had tried to commit suicide several times previously. He denies beating her, claiming his plans to take her to the airport were thwarted when police intervened and took her to the psychiatric hospital.

Najla Chahda, Director of Caritas Lebanon Migrant Centre, told Daily Maverick that Dechassa’s case is just one of many other harrowing instances of abuse in Lebanon. “Abuse is common. It’s a widespread practice that is allowed by law,” she said. As well as casting new light on the frequent incidence of abuse of migrant labourers in Lebanon, Chahda believes it also forces new scrutiny on the social and legal structures that deny workers human rights. “This case may indicate the larger issue of migrant domestic workers’ vulnerability to abuse in Lebanon, which puts the whole system in question – the sponsorship system which ties the domestic worker to one employer and does not guarantee her basic human rights.”

Dechassa is not the first Ethiopian worker reported dead while working in Lebanon. Between 1997 and 1999 alone, 67 Ethiopian women died “on duty” in Beirut. Activists estimate that there are over 50,000 Ethiopians currently working in Lebanon, most of them women toiling away as house maids in the hope of winning a better life for the families they’ve left behind. Lebanon is the most popular destination for Ethiopian domestic workers in the Middle East but reports of abuse against Ethiopian domestic workers have grown worse as it grows in frequency. The Ethiopian government, unable to stop the human rights violations perpetrated against its citizens in Lebanon, decided to ban women from seeking employment there.

“Suspending the work travel to Beirut was the only solution to minimise the human rights abuses dangers on our citizens,” Zenebu Tadesse, Ethiopian deputy state minister for labour and social affairs said at the time. But even as the government sought to stem the migration of Ethiopian women to Lebanon, unscrupulous labour brokers and desperation in Ethiopia combined to create a thriving illegal trade. “Ethiopia banned women from travelling to Lebanon to look for work but women have been huge sums of money to brokers to get to Lebanon illegally,” Chahda says. By agreeing to forfeit a substantial fraction of their salary to the brokers, Ethiopian women are transported to Beirut through secondary points like Yemen. When they do find themselves employed in Lebanon they also find themselves severely in debt to their brokers.

Dechassa was one such woman, indebted to the agency for bringing her to Lebanon illegally. These women have little access to redress. They are doomed to a life of slavery, a life of suffering. Chahda believes the plight of these workers will be assisted if the Ethiopian government lifts the ban on economic migration to Lebanon. She says the conditions in which the workers are taken to Lebanon and then forced to work in are inherently shorn of basic human rights. She believes brokers and employers are allowed to act with impunity because they are not held to account by the rule of law. In Lebanon, she says, efforts to introduce legislation to govern the conditions in which migrant domestic workers are employed have been significantly stymied by the political instability in the country. Lifting the ban on Ethiopian women working in Lebanon she believes allows these women at least one avenue of redress within their own government representation.

And yet even as the effects of such migration bans are played out in Lebanon, Sierra Leone last week issued a similar ban on their citizens from seeking employment in Kuwait and Iraq citing “appalling conditions”. “As a responsible government we cannot allow Sierra Leonean citizens to go out there and work for meagre salaries and in unfavourable conditions,” minister of labour Hindolo Trye is reported to have said. But as states like Sierra Leone and Ethiopia battle to create employment opportunities for their restless, young populations the lure of work in the Middle East is difficult to resist. Even when Arab countries continue to build their reputation for human rights violations against migrant workers, the need for work, for bread, for economic liberty is difficult to quash.

Still, the list of abuses perpetrated against migrant labourers in the region is astounding. Human Rights Watch, in a report released in May 2010 lists a number of violations. Among them, unpaid wages, excessive working hours with no time for rest, heavy debt burdens from exorbitant recruitment fees, isolation in private homes and forced confinement in the workplace contribute to psychological, physical and sexual violence, forced labour and trafficking. Is it fair though to paint Lebanon with the same tainted brush of the human rights violations, perpetrated against migrants in other Arab states.

After all, every Arab country, though united in language, is unique. Each has their own cultures, their own social norms. Surely, it isn’t fair to bundle Lebanon together with Saudi Arabia? They are so vastly different. I’ve seen the conditions of domestic migrant workers in Saudi Arabia myself. I’ve seen too the effects of the lame attempts at banning economic migration that only result in a culture of impunity. But Chahda believes Lebanon is no different to Saudi Arabia in the way it treats its migrant workers. “Lebanon is a country where domestic migrant workers are abused, like Saudi Arabia and Kuwait,” she says. And they continue to be at risk of abuse. Millions of African women workers remain at high risk of exploitation and violence, with little hope of redress. Theirs are lives of slavery, lives of unspeakable suffering. DM

Photo: Women taking a stand against the abuse of migrant workers. REUTERS.

Please note: The original version of this article quoted  Rola Abimourched, programme co-ordinator at KAFA (Enough) Violence and Exploitation when in fact it was  Najla Chahda, Director of Caritas Lebanon Migrant Centre who had spoken to the writer. We regret the error and apologise to Ms. Chahda and Caritas for the error.