Ethiopia and Eritrea: brothers in arms

Ethiopia and Eritrea: brothers in arms 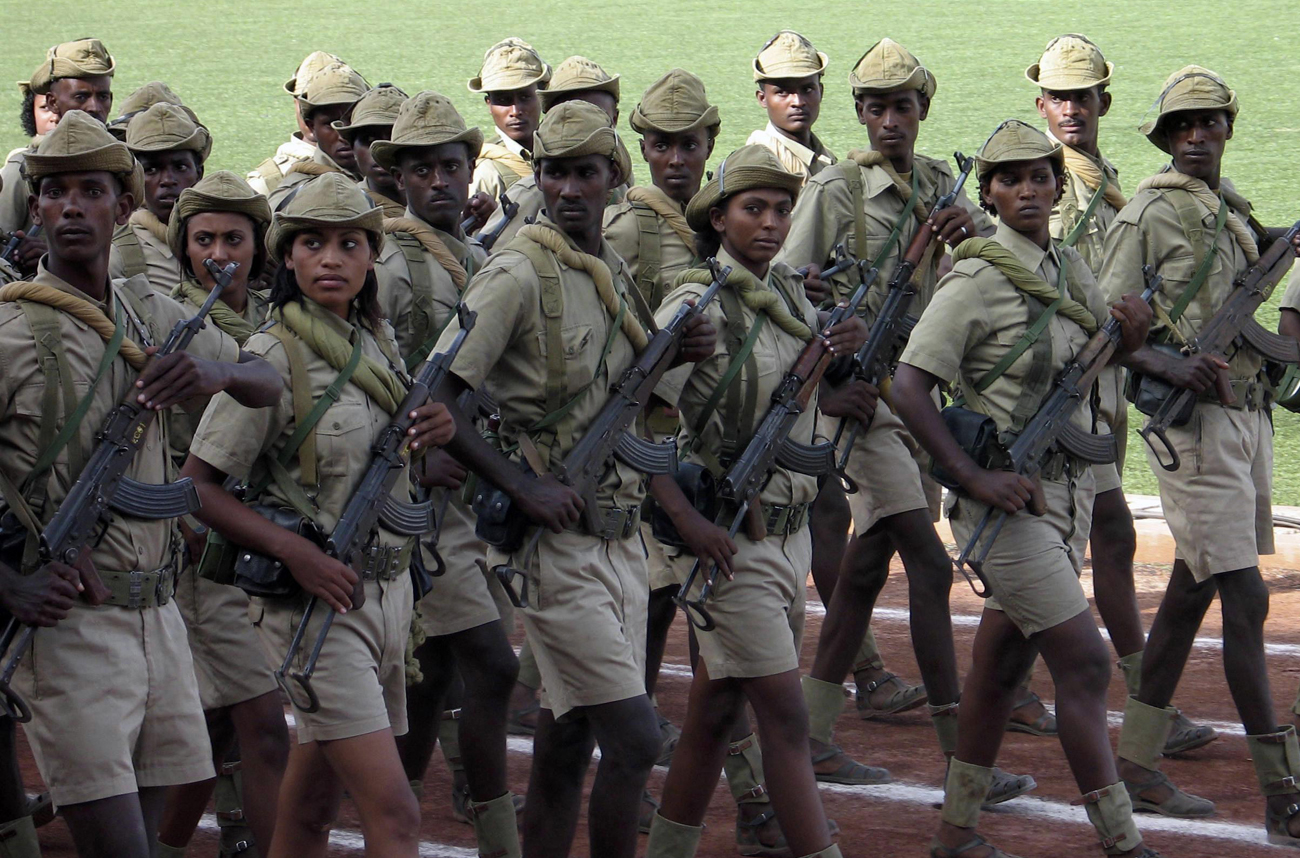 The relationship between Ethiopia and Eritrea has never been easy, and their torturous recent history and Ethiopia’s unswerving belief that Eritrea should not exist as an independent country make it difficult for either side to be civil. Think of them as two siblings whose very closeness exaggerates their animosity – but remember that this family feud has already killed tens of thousands, and Ethiopia’s recent cross-border adventures are raising fears of more violence to come. By SIMON ALLISON.

The Ethiopian military has been busy of late. In addition to its incursion into Somalia, which is occupying a fair amount of troops and equipment, Ethiopian soldiers were dispatched 16km into Eritrean territory on two separate occasions last week – on Thursday and on Saturday – ostensibly targeting an Ethiopian rebel group that is based in Eritrea. The raids were successful, according to a government spokesman, although he didn’t elaborate on what exactly success entails.

Eritrea, predictably and (for once) with justification, criticised the incursion as an unjustified attack on its sovereignty by a belligerent larger power. And it denied harbouring any rebels or terrorist groups, neatly turning the tables on the Ethiopian government by questioning how an unpopular government even defines rebels: “Almost all Ethiopians are fighting against the regime for the obvious reason because the regime is pursuing a narrow, corrupted policy, which services a very small family of the elite,” said a smug Eritrean spokesman, choosing not to add that his own government could be described in much the same terms.

But Eritrea has good reason to be concerned over Ethiopia’s bellicosity, and the apparent indifference with which the outside world has greeted it. Eritrea’s existence as a country has always been tenuous at best, with Ethiopia seizing whatever opportunity presents itself to incorporate Eritrea into the greater Ethiopian state. For despite the many similarities between the two countries in terms of ethnicity, culture and food, Eritrea holds one advantage that land-locked Ethiopia craves: a coastline.

This detail has precipitated some of the bloodiest conflicts in Africa’s recent history, from Eritrea’s decades-long struggle for liberation (which succeeded, ironically, with help from the then-rebel movement of Ethiopia’s current Prime Minister Meles Zenawi) to Ethiopia’s failed war in the late 1990s (partly instigated by Zenawi; there’s no honour among rebels) to reclaim what they see as their lost province, at a cost of an estimated 70,000–80,000 lives.

Ethiopia’s latest incursion is the first that it’s admitted to since that bloody period, although Eritrea claim that there have been plenty more. Of course, Ethiopia still occupies some Eritrean land, specifically the town of Badme, the focal point of the last war which a United Nations commission ruled should belong to Eritrea. But Ethiopia has refused to budge – possession is nine-tenths of international law, after all. It was just north of Badme that the recent raids occurred, allegedly targeting an Ethiopian rebel group that operates out of Eritrean territory, supposedly with Eritrean government support.

The rebel group in question is the Afar Revolutionary Democratic Unity Front, a secessionist movement fighting for an independent or autonomous state for the Afar people, a group that spreads across parts of Ethiopia, Eritrea and Djibouti. They made headlines in mid-January when they attacked a tourist convoy, killing five Europeans and kidnapping two more (the two kidnap victims have subsequently been released). But the rebels are just a sideshow, a useful pretext for Ethiopia to remind Eritrea exactly who’s boss.

It’s a good time to do so. Over the last decade or so, Eritrea has turned itself into an international pariah, earning itself the none-too-complimentary nickname of “Africa’s North Korea”. President Isaias Afwerki is eccentric, unpredictable and exceptionally autocratic, and under his leadership – the only leader that Eritrea has known post-independence – Eritrea’s statistics on health, poverty and education have all declined while the suppression of opposition has increased. The country’s foreign policy is almost exclusively designed to counter Ethiopia, the narrowness of this goal causing Eritrea to make a few bad decisions – like trying to organise a bomb to disrupt last year’s African Union summit in Addis Ababa, and funding Somali militant group al-Shabaab. All this has given Eritrea no friends on the international stage, only enemies.

Meanwhile, Ethiopia has plenty of friends. China is investing there in a big way, the African Union is based in Addis Ababa and it’s working closely with neighbours Kenya and Djibouti in fighting al-Shabaab in Somalia – a move which has also endeared it to western powers who are reluctant to get involved in Somalia themselves. Hence the complete lack of any kind of international condemnation of Ethiopia’s attack on territory belonging to another sovereign country.

The big question now is just how far Ethiopia intends to go. This could be nothing more than sabre-rattling, an exercise in flexing their considerably larger muscles and showing Eritrea who’s boss; a continuation of the petty intimidation tactics frequently used by both sides (such as Ethiopia’s recent jamming of the Eritrean TV signal – I have watched Eritrean TV and can assure you this was no great loss). But it could also be the beginning of something more serious; the initial stages of a grander plan to bring Eritrea back into the Ethiopian fold, and give Ethiopia the port access its economy so desperately needs. And under the cover of everything else that’s going wrong in the Horn of Africa – especially the Sudans and Somalia – this might be a good time to get away with it. DM