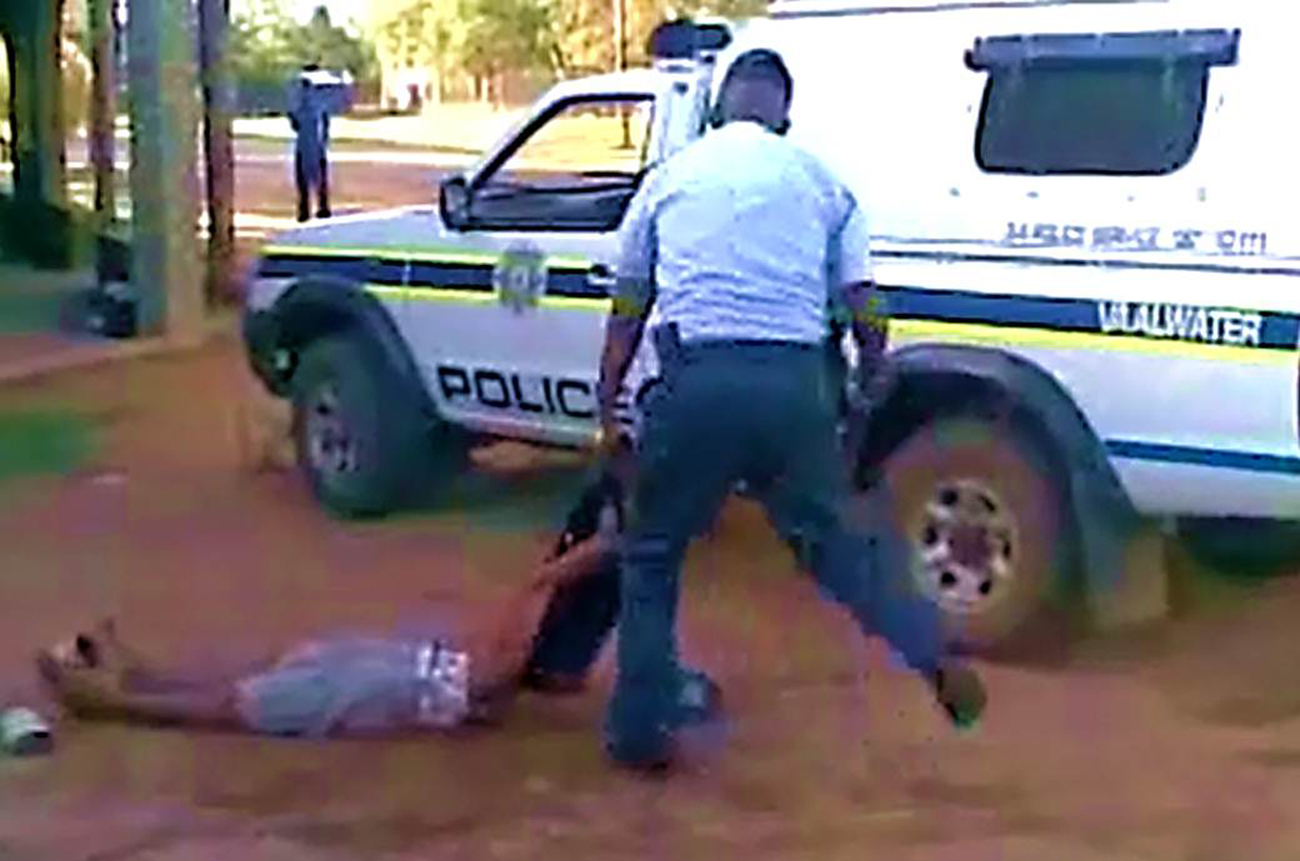 As South Africa reels in the wake of widespread video evidence of a Limpopo policeman officer suspected of brutally and repeatedly attacking an unarmed man, more cases of police violence continue to emerge from that province. By MANDY DE WAAL.

Another case of alleged police violence has been opened in Limpopo, this time at the Mankweng police station, after a local officer was accused of attacking a civilian in his own home with a panga.

This latest incident of alleged brute force by police in the province follows the broadcast of a shocking video shot in November 2011, showing a Vaalwater officer attacking an 18-year-old boy outside Bela-Bela. The video was published online and aired by the SABC.

Meisie Kennedy, a DA member of the provincial legislature for Limpopo, was made aware of the newest incident after a relative of Andries Ramongale, the man allegedly attacked by police, reported the event to her.

“Andries’ hand is badly injured because when the police attacked him, he tried to protect his head with the hand, and then that panga chopped him,” Kennedy said soon after returning from visiting Ramongale in hospital, where he is being treated for his wounds.

Ramongale of Ga-Dikgale near Polokwane was allegedly attacked by a Mankweng police officer in uniform after two policemen carried an unspecified search on his house. Kennedy, who has spent some time in hospital with Ramongale, relayed his story to Daily Maverick.

“Andries has a girlfriend, and they were drinking somewhere,” said Kennedy, who added that Ramongale’s girlfriend was very drunk and couldn’t walk home. “When Andries wanted to go home he realised that the girlfriend couldn’t even walk, so he arranged for a wheelbarrow to take the girlfriend home because she is very heavy.”

With his girlfriend in the barrow, Ramongale made his way home where he told his girlfriend to lie down and sober up a bit so he could take her home. “He was afraid because his girlfriend had elderly children and grandchildren, and he didn’t want them to see her in that state.”

Later the girlfriend’s daughter arrived to try to take her mother home, but to no avail as the mother was still immobile. “The daughter told Andries that she was going to the police to get help, and Andries said that there was no problem and that she should get help.”

Much later the mother (Ramongale’s girlfriend) woke up, and Ramongale escorted her home, and returned to his place. “Late on Sunday night two policemen came and asked after his girlfriend, but Andries said he had taken her home. The policemen then searched Andries’ house and found a matchbox of BP Tabaco, which at first glance they thought was dagga. But on closer inspection they realised their error,” Kennedy explained.

“While Andries’ house was being searched, the one of the policemen told Andries he was very naughty, and asked him how he could come to be in love with someone who is older than he is.” Ramongale is said to have retorted that this was none of the policeman’s business. Ramongale told Kennedy that the policeman got angry, found a homemade panga under the bed, and proceeded to beat Ramongale on his legs.

“The policeman was shouting that Andries was very naughty and didn’t have respect. Andries kept on answering back, and the policeman started to hit Andries on the head with the panga, but Andries held his hands up to protect his head and his hand was badly wounded. The panga chops landed on his right hand, I even have photos of that,” said Kennedy.

Blood started to flow and Kennedy relayed Ramongale’s story of how the police officer apparently realised what he’d done and allegedly tried to clean things up. “The blood was oozing all over the room and the police realised he had done a very big mistake. While the one police was scrubbing away the blood the other one said: ‘Let’s leave this dog to sleep. Let’s leave this dog who is bleeding and let’s go.’ The policeman stopped scrubbing the floor and before he went out he warned Andries that if he told anyone about the incident he would come back and kill Andries.”

Kennedy said Ramongale was afraid to go to hospital or the police, and hid in his home until a relative heard of the attack and came to help a few days later. By that time Ramongale couldn’t move his hand, it was terribly swollen and Kennedy said the wound “started smelling”. (Ramongale is currently recuperating in hospital where his wound is being treated.)

“We are seeing a lot of this. There is an increase of police violence here. We try to ask the police why this is happening, but they don’t know why it is. No one can answer that question,” said Kennedy.

When asked what was going on with the police in Polokwane and why incidents of violence appeared to be on the increase, SAPS spokesman Hangwani Mulaudzi answered bluntly: “Hey, I don’t know what the hell is going on here.”

Mulaudzi said that swift action had been taken against the Vaalwater officer identified in the Bela-Bela police brutality video. “We have already suspended him without any pay pending the investigations as well as the disciplinary hearing. We condemn the ill-disciplined manner he portrayed, in the executing of his duties and we want to dissociate ourselves from that kind of activity from any member of who is attached to the SAPS. We will not hesitate to take strict measure to ensure that people like this are taken out of the system,” said Mulaudzi.

“It took us by surprise, in fact we were very shocked by the despicable manner in which that member treated that boy,” Mulaudzi added. “When we got the information we quickly opened up a case against him, we also kick-started with internal investigations as well. That matter was then transferred to the NPA (National Prosecuting Authority) who agreed with us that he could be charged under the GBH (grievous bodily harm). That part has already started, he appeared yesterday and he will be appearing again on the 9th of May. He will also be appearing before a disciplinary committee next week Friday.”

When iMaverick asked Mulaudzi for comment on the alleged police attack on Ramongale, the police spokesman wasn’t aware of the incident but said he would investigate promptly. True to his word Mulaudzi phoned back 15 minutes later.

In an interview with the SABC, the Independent Complaints Directorate (ICD) said it was getting increased complaints of police violence. “I think people are more aware of the need to report (police brutality). Therefore the cases are coming to the fore and the advent of social media and all of those facilities make it easier for people even if they don’t report, they will post it on YouTube and Facebook,” said ICD spokesperson Moses Dlamini in an interview with SABCnews. DM

Photo: Claims of alleged police brutality in Limpopo are becoming increasingly prevalent. Screengrab of the video made public by 2Oceansvibe.com