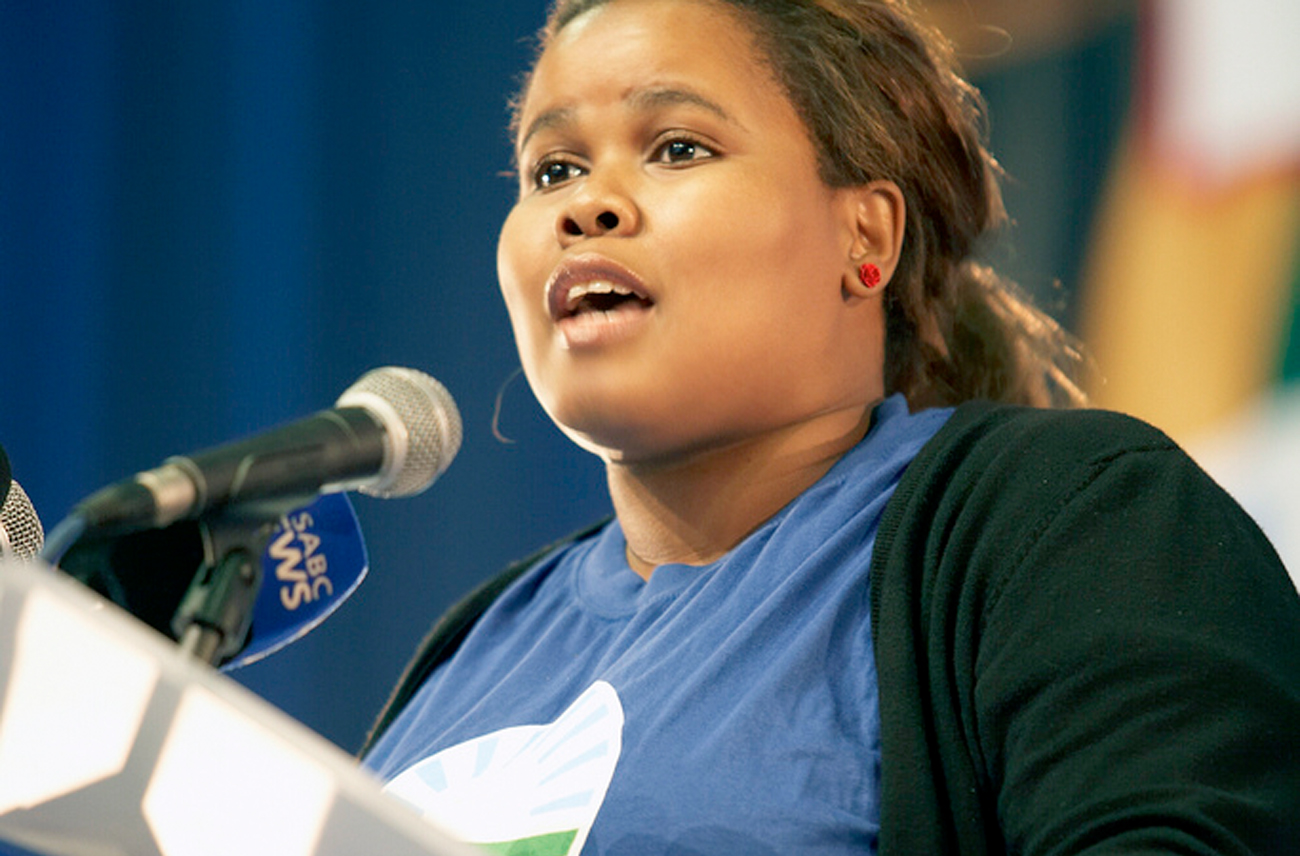 Social scientists would be hard-pressed to find a better lens into identity, privilege and race in post-apartheid South Africa than the University of Cape Town’s admissions policy debate. One of the many discussion points it has raised is that of a black middle-class yearning to redefine being black. By OSIAME MOLEFE.

South African universities have become, wrongly so, some argue, places where issues of inequality, poverty and the redress of decades of apartheid come to a head. In January this year, when Gloria Sekwena, a 47-year-old mother of two, was killed in a stampede of students and parents hoping to gain last-minute admission to the University of Johannesburg, it highlighted again that university education is still viewed by most as the sole route out of poverty toward economic prosperity.

Higher education minister Blade Nzimande said, after the incident, “The problems of applications for admissions are symptomatic of a larger challenge. Universities alone cannot, nor should they, cater for all post-school education. This annual crisis requires that we change the widely held perception by most South Africans that universities are the only acceptable option for post-school studies.”

That view, for now, remains unchanged. As a result the limited places available each year at the country’s universities remain highly contested and the methods used to determine who is allowed in, the subject of fierce debate. To its credit, the University of Cape Town has welcomed and at times stoked discussions over its own admissions policy, which currently gives preference to students who self-identify as black African, Indian, coloured or Chinese. For now, the policy says, these groupings best identify who was disadvantaged by apartheid’s race-based discrimination and must be provided measures to redress the discrimination and its resulting inequalities.

To say this view has divided opinion would be a gross understatement, which is why the university last month invited members of the public to make written submissions to a commission set up to help the council and senate review the admissions policy as they do every year.

The commission, chaired by Judge Craig Howie, a member of the UCT council, received 85 written submissions by last Friday’s deadline, Gerda Kruger, the head of communications and marketing at the university, said. Among them was one from the Democratic Alliance Students Organisation (Daso), a fierce opponent of race-based admissions policies.

Daso argued it was sometimes too late to compensate for 12 years of poor education at university. The ideal approach to determining university admission would be a test that measures academic potential, as this is widely distributed across the school-going population regardless of race. It concedes that this approach is complex and would be slow to implement, but “even in the absence of an assessment that accurately tests for potential, there is still no reason to remain with a race-based admissions policy”.

Upper- and middle-class students who attend the same schools should be treated the same, regardless of race, it argues.

On Tuesday night, at the newly built Obz Corner residence, UCT students squeezed into a room in the common area to hear Lindiwe Mazibuko, the Parliamentary leader of Daso’s motherbody, speak on race. It might be startling for some to hear this because Mazibuko and the DA are often accused of pretending race does not exist.

Quite the contrary, Mazibuko does not shy away from talking about race. She started her talk by saying that race is arguably more fundamental in post-apartheid South Africa than matters related to public policy, “because policy making unfolds within the context of this (the race) debate and the outcome will determine the success of our entire nation-building project”.

Mazibuko’s take on race transcends the topic and goes to what she said is a truth greater than the policies of any political party: “The only way we will build one united nation is if every community, be it formed upon political, racial, ethnic, religious or any other lines, makes it a part of their daily life to defend the rights of other communities.”

She attributed the re-racialisation of South African society, after the heydays of the now mythical Mandela-era, to former president Thabo Mbeki, who appealed to the basest notions of African nationalism in his attempt to invert the colonial discourse. Race, however, is polarising and has the potential to stifle and choke rational decision making, she said.

The UCT admission policy is one such place where Mazibuko believes race has stifled rational decision making, as it has led to the replication of the same assumptions made under apartheid. Then and now, different race groups are treated as though they are somehow homogenous when in reality they likely are not.

Class, like race and culture, is not immutable. We cross these barriers every day of our lives, Mazibuko said.

The 31-year old has, since her meteoric rise to lead the DA in Parliament, become the poster child of sorts to the children of a black middle-class that, even under apartheid, crossed the barriers of which she spoke. Now of university-going age, these children are searching for a way to uncouple black from an automatic association to disadvantage, poverty and in need of a leg-up.

“People are not just the colour of their skin. The measure for disadvantage should encapsulate a number of things. A black girl from the rural areas and a black girl from a private school in Sandton have not really been afforded the same opportunities,” said Sethu Tshabalala. She shared this view with Daso, which has replicated it a pamphlet and a video of what it says UCT students really think of the admissions policy.

Tshabalala, like the other students of colour featured in Daso’s gloss, are from well-resourced, private or independent schools like Clifton College in Durban and Reddam House in Johannesburg.

Moratwa Jwale, a fourth-year medical student, questioned the haste shown by her fellow students of colour in discarding race as a measure of disadvantage. She believes the motivation for opposing a race-based policy comes from personal interest, not from what policy would best address the education system’s inequality.

She said she was unapologetic about benefitting from the race-based policy because she puts in the work regardless. Even without the race-based policy, questions would still remain over black students’ achievements because it’s not the policy that’s perpetuating stereotypes. Racial stereotypes exist in society and removing race shields people from having to confront them, Jwale said.

While she completed her schooling in a British school, her foundation years were in an under-resourced school in a township near Klerksdorp. This made her different from the white students in her high school class, despite it having been in another country. So assessing her level of disadvantage by looking at the school she went to, as Mazibuko suggested should be done, would disguise much.

“Take me out of the equation. Look at the majority of black students outside of school. Even if they sit in the same classes as white students, their home lives are different because, like Lindiwe said, poverty in South Africa is still a majority black phenomenon,” she said.

Jwale has also made a written submission to the council. She agrees that race as a pure measure of disadvantage is probably not enough, but says it would be foolhardy to discard it completely. She was not the only one to hold that view in the room of mostly black students. When any question challenging Mazibuko was raised – and there were many – it was met by rapturous applause. Mazibuko, though, revelled in it.

One student asked her, getting to the nub of what many were grappling with, “How and why do you call yourself black? What does black mean to you?”

“Black is not some kind of prize people can award me if I behave in a certain way, if I talk with a certain accent, if I recite izithakazelo zakwa-Mazibuko, if I went to a certain school. Black is simply what I am. It’s not a goal to be reached. It’s not a moral value. It cannot be changed anymore than the fact I am a woman,” Mazibuko said, seemingly off-the-cuff. She, too, has obviously asked herself the question.

“It is a demographic box which has meaning because of the history of the country I live in. It ends there. It doesn’t define who I am as a human being. It amounts to an unalterable descriptor of me; it doesn’t amount to a description of my character, my worth or my value as a human being.”

But for many others who’ve yet to transcend the barriers of class and culture, black continues to mean significantly more than just a tick in a box. And as the Mazibuko generation pulls black in one direction, where does this leave them? DM