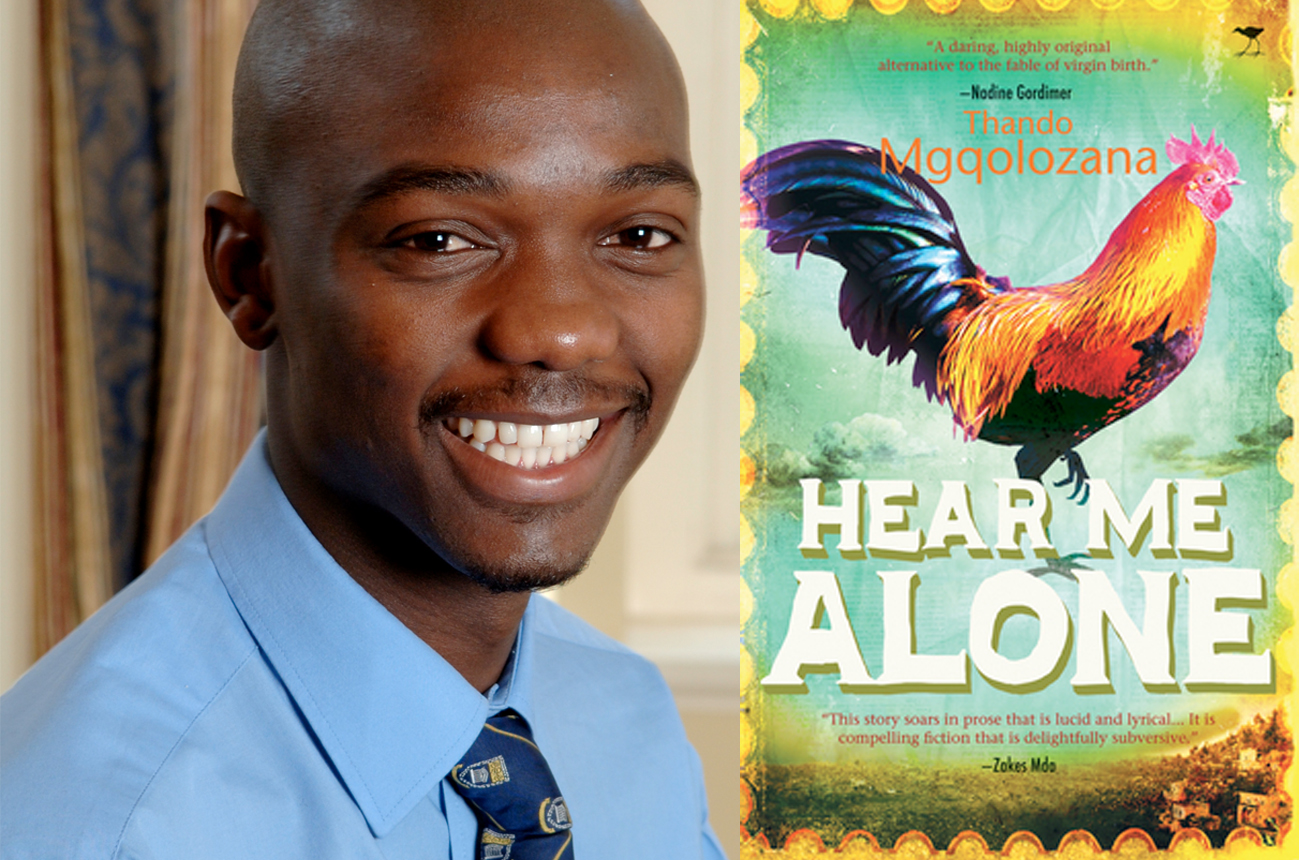 Hear Me Alone is cast entirely in the form of a first-person narrative by Epher, a young Nazarene, tormented by his awareness that every existing account of the conception of The Lamb has it wrong. His book and his alone will set the record straight, especially through revealing what happened one evening between him and his childhood friend, Bellewa Miriam. Reviewed by Chris Dunton.

Mgqolozana’s skills as a writer are immediately apparent in a long, beautiful and quite unsentimental description of the daily flight habits of village birds.

This establishes one of several interlocked thematic strands in Mgqolozana’s outstanding novel, namely the vindication of good writing.

In this novel, the range of writing is indeed varied. There is some lovely sharp humour, as in Epher’s comments on Miriam’s uncle: “I detested what people said of him: that the string on his head’s lamp does not reach the oil at the bottom,” or on a herbal doctor who has accidentally self-maladministered an erectile drug: “The seer had learned [the correct dosage] the hard way, in the literal sense.”

There are also moments of entrancing beauty from a novelist who has an exceptional command of the natural world: the episode, for instance, in which Epher’s servant and friend, Kush, teaches him how to make a lizard dance by singing to it. There are also passages of considerable power, drawing us into one of the novel’s main concerns, patriarchy: “A woman, in my world, was a man’s most treasured property, although at the time, these same women got little of the esteem for themselves.”

The story begins with Epher as an adolescent, on vacation in Nazareth from his studies. As we know from his first novel, A Man Who is not a Man, Mgqolozana writes insightfully on the feelings and perceptions of the young and on how even kindly adults can patronise them.

These early chapters are engrossing, but they are also hard work, given the tendency of practically every character to speak in riddles, or at least obliquely. Here, mysteries are wrapped in enigmas. “My mind was in twirls and knots,” confesses Epher at one point, and readers’ minds may well be too.

Young as he is, Epher, a trainee surgeon, is called in to deliver a neighbour’s baby. This is a gripping scene, even though its implications are baffling, prompting the reader to keep hazarding guesses — is this at stake? Or that? At the end of the episode Epher comments that the child would have lived, were not Herod’s massacre to have taken place two months later.

Then comes a comment that fuses the novel’s focus on patriarchy with its concern with the validity of Holy Writ: “The timelessness of The Virgin, as currently inscribed, could prove to be the most valid tool for endorsing the subjugation of women by men.” At this point — about one quarter through the novel — one senses how explosive Mgqolozana’s “African makeover of Judea” (as the blurb puts it) may turn out to be.

Epher plots to persuade his sweetheart Miriam, engaged to a wood merchant called Joseph, to abscond with him. Here there is a flashback, sweet and wry, recounting how the two became friends, with Epher recording: “I was planning, pre-planning, un-planning, and re-planning the most suitable words to disarm her”.

Throughout, the bon mot is urgently sought after. Everyone here has a “hear me alone” — his or her inner voice, source of enlightenment, inspiration and torment. For Epher, aware that everyone around him has one and seeing how little good comes out of this, what is needed is more conscience. But what he gains from his own hear-me-alone as the novel’s crisis develops is an “incoherent rant”. If insight is elusive, so too are the terms through which to recount it.

Epher plans to leave Nazareth for two reasons: to find Miriam, who has already absconded, and to escape reprisals from other surgeons, envious of his expertise. But things go wrong. Stung by a scorpion, he fails to get away and lies in a coma for a month in prison, where he is whipped. For his designs on Miriam, at the instigation of Joseph, he is due to be stoned to death. Joseph, meanwhile, has gone in search of Miriam, who will also be stoned after Herod’s census has taken place. Next up, the birth of The Baptist, announced by Gabria (note the female version of the name), “the favoured hear me alone of the Virgin”. At this point the nature of a “hear me alone” and the novel’s take on the Biblical account become even more elusive.

An earthquake destroys the prison and Epher and the faithful, lovable Kush set out to find Miriam. “The Lamb is mine and Miriam’s,” records Epher, “and he is also the Virgin’s. I am writing this book to show you how it is that he is mine” (by now we have learnt that the Virgin is male). The narrative turns picaresque, its episodes including an all-male shepherds’ orgy, followed by Epher’s audience with Herod, who sits “surrounded by portraits of himself in cynical, self-important poses… as all chiefs and kings do”. Then there comes the night of the birth in Bethlehem and a flashback to Epher’s crucial encounter with Miriam. The whole thing wraps up in a way that is, well, extraordinary.

The novel’s blurb carries plaudits from Nadine Gordimer, Zakes Mda and Maureen Isaacson — and you can’t say fairer than that. Also one I like especially from Pumla Gqola, who comments: “When I read Mgqolozana’s first novel… the world shifted. In Hear Me Alone the world that changes is bigger.”

I have a Christmas list of subjects I’d like this challenging and innovative young novelist to tackle. Xenophobia, gay and lesbian life in the townships, farm violence. He has the ability to turn our world of perceptions inside out. DM

Photo: Thando Mgqolozana and his novel Hear Me Alone.