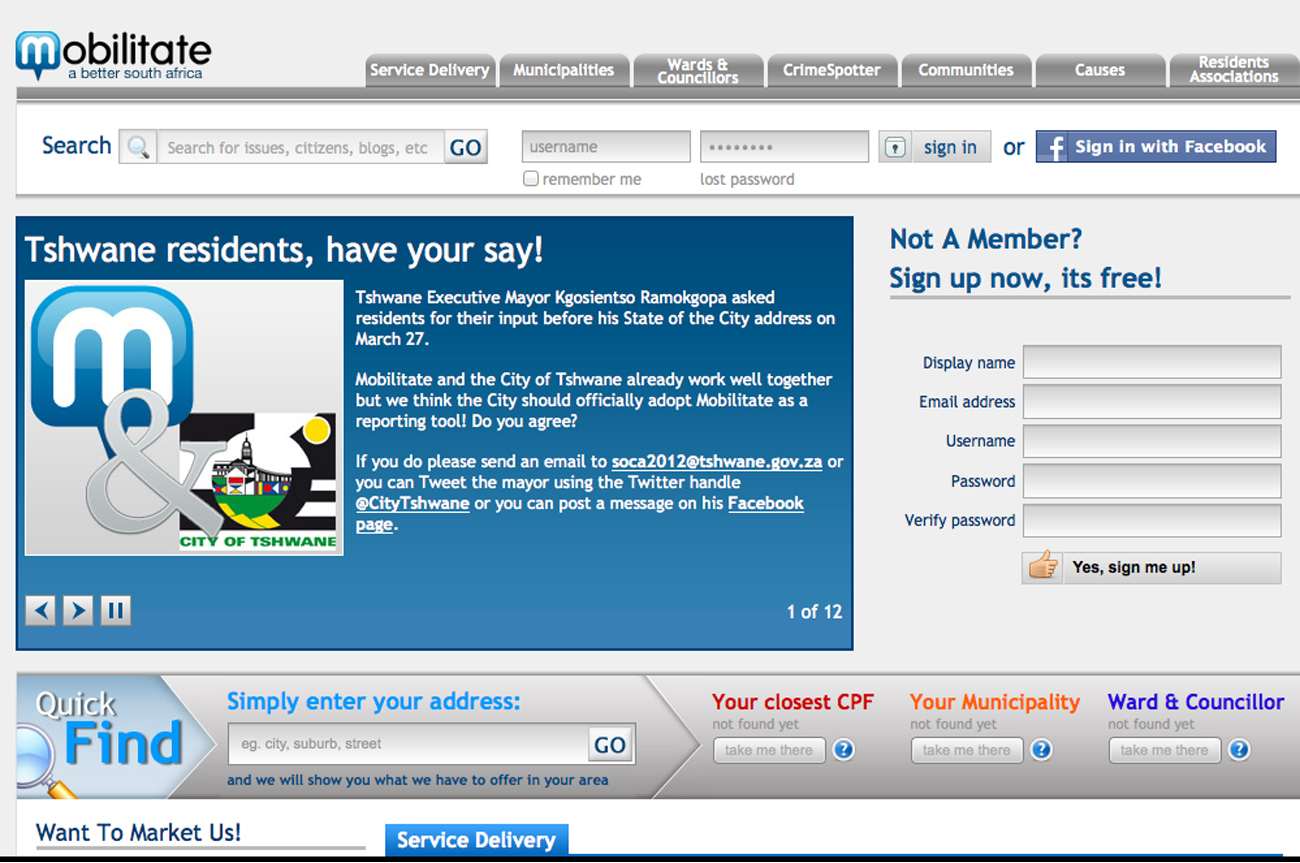 Technologist Lionel Bisschoff returned from abroad to create a good living as a consultant and trainer to big companies like Absa and SAB, so why’s he throwing millions into a digital platform that enables local government ratepayers to communicate better? By MANDY DE WAAL.

Bisschoff is convinced he can make good money in the long-term with Mobilitate, a free service that connects citizens and municipalities in a transparent reporting system that aids better government. And he just might be right. An example could be Florida Park High School, west of Johannesburg.

Ten months ago it found out it was due for a R10-million upgrade. Today the school it is a disaster zone after Situkulwane Lesisha, the construction company awarded the tender to do the refurbishment, has left the school in a state worse than it was.

The government’s take on this? Well, spokesman Charles Phahlane says: “There is no need to appoint another contractor. They (presumably Situkulwane Lesisha) have to fix and complete their assigned work with due regard to the fact that they are working in a school where learning and teaching should not be disrupted.”

Easy enough for him to say, but now a school has to do battle with contractors and government to get the disaster sorted out. Perhaps they should consider outsourcing the problem for free to Mobilitate, a local website that plugs people directly into local, provincial and national government.

For the most part, South Africans live in fairly alienated or disempowered contexts. If you have a billing problem with the City of Johannesburg, you have to take time off work and join the queues. If you’re in Mayfair and there’s a massive pothole in the road, there’s the question of first trying to find out who to complain to, complain and then ensure your pothole’s filled.

Mobilitate is a digital platform that is free for citizens and for government to respond to queries and aimed at enabling collaboration. It is multi-platform and can be accessed via the Internet, mobile phone or smartphone. Once registered, citizens use the system to identify what’s wrong with public infrastructure. There’s no more hanging on the line listening to muzak or waiting in queues, because Mobilitate endeavours to ensure complaints are directed to the right person in the right department. The service follows up to ensure issues are addressed and resolved. Users are able to track the progress of their complaint at any time.

“Mobilitate is getting a mixed response from local government, but in most cases we work very well with local municipalities, especially the City of Tshwane, Ekurhuleni and Cape Town. In some areas of Johannesburg we work well, but in others it is a struggle,” says Bisschoff.

“There is an element of being a watchdog, but that is not the point. The goal is to make government transparent and create a mechanism for cooperation. It is about understanding each other, and working together for the common good.”

The benefit for local government is big. Municipalities harness the power of the crowd to find out what’s broken and where. “Mobilitate provides a very efficient and cheap method for government to prioritise what should be fixed and when,” says Bisschoff.

Bisschoff isn’t discouraged that government is taking so long to adopt Mobilitate. “I don’t think it is because government is being difficult. It is because what we are doing is completely new and it takes people a while to realise its value.

“In consulting with private organisations I have seen that doing innocuous things about transparency have major impacts on the way people behave and think. It creates a willingness to work together to tackle problems. Once you create transparency about what is going on, people tend to focus more on the issues rather than who is telling who what, and who is not being honest. As soon as you remove those wasteful activities, people start creating value and adding activities to start changing and improving the system, as opposed to playing around in the system,” Bisschoff says.

“Municipalities gain by being transparent in that citizens can see what is being done by local government. As soon as transparency is in place a lot of the fear disappears, and citizens start working together to tackle the problems, instead of running around fearing one another.”

Mobilitate is a privately held, profit-based company that is currently running at a loss, but which aims to make its money through advertising. “Instead of every municipality building its own IT infrastructure – and the 270-odd municipalities across South Africa have almost no IT infrastructure – we build one national platform that is free to government and citizens and which is financed by advertising,” says Bischoff, who’s not adverse to floating the company with some mechanism that enables rate payers to own Mobilitate. However he’s of the strong belief this kind of digital platform should be privately owned, independent and not owned by government.

Bisschoff made his money in the online gaming industry offshore before returning to South Africa to start a technology based company to improve private-sector performance. So why’s he investing vast amounts of time, energy and financial resources to get Mobilitate off the ground?

Bisschoff says he looks around and sees what’s not working, and then looks for solutions to address his frustrations. It is early days for Mobilitate which hasn’t seen the multiplying network effects of viral growth kicking in yet. The system was only finalised five months ago.

The system currently has 19,000 citizens on board as members, has had some 6,000 complaints registered of which about 50% have been resolved. As service delivery frustrations bite, Mobilitate could prove useful given it’s a smart tool that empowers and liberates citizens without draining overburdened resources, perhaps it will begin to gain real traction. DM

Photo: Mobilitate may have a future as tool that empowers ratepayers to communicate better. MOBILITATE.CO.ZA.