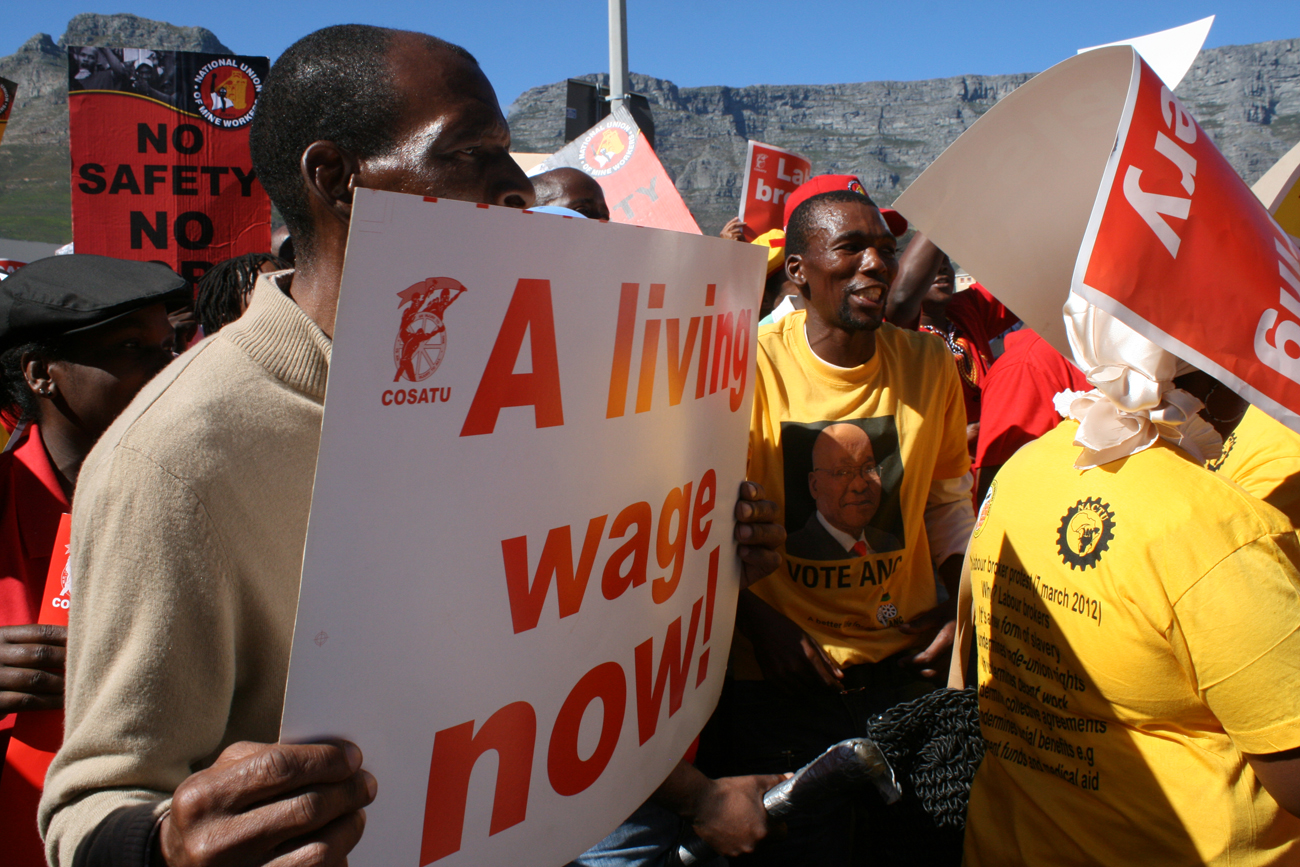 Cosatu’s protest was no more than 12,000-strong at its peak, fewer than half the number predicted. It was nonetheless an impressive show of force on Cosatu’s part. Much pouting and shouting, but the whole exercise was somewhat of a contradiction. By OSIAME MOLEFE and REBECCA DAVIS.

Cosatu Western Cape’s march through the Cape Town was always going to be the poor cousin of its larger event in Johannesburg. But that did not dampen the spirit of the throngs of dancing and singing workers dressed in red. They were there to hold the government accountable.

“We are here to shut Cape Town down,” one shouted while walking down Buitenkant Street toward the start in the historic District Six. A little further on, a textile merchant tried to calm nervous customers watching a trickle of red build to a flash flood.

“We’re not closing. We’ll open when the marchers have passed,” she said from behind the closed wrought-iron gates of her store. That was the extent to which the Mother City bothered – a few, temporarily closed streets here and some stores trading through closed gates there. Nothing like the grinding standstill Cosatu provincial secretary Tony Ehrenreich had promised.

A group of SA Transport and Allied Workers Union members tried to stage a mini-march of their own on the way from Cape Town station to the start of the protest. “This march is permitted and we will not be pushed around,” the leader of the group claimed. But the police were not having it. They rushed the group up toward Keizersgracht Street and behind the truck that would lead the procession.

Other businesses along the path of the march revelled in the opportunity to make extra money off pedestrian traffic. A Plein Street merchant said a hot day usually brought an increase in cold drink sales. It was 28°C, sunny and cloudless, so he expected to coin it, especially because his competitors chose to close.

At 09:30, half an hour before the scheduled start of the march, squadrons of police officers in riot gear took their final orders behind a block of flats before filing out to their posts. The scene was quite unlike August 2011 when an unready Cape Town police force was bested by an unruly SA Municipal Workers Union protest.

Cosatu, too, did not want violence to detract from the message it was trying to send to government and business. Ehrenreich asked protesters to keep an eye out for elements determined to derail the peaceful protest. Fears proved unfounded, however, as the march took place without a single incident. A lost cellphone and a misplaced set of keys were about the worst of it.

While the crowd toyi-toyied and sang struggle songs, including a couple of renditions of the banned Dubul’ ibhunu and the national anthem without the Afrikaans lyrics, the mood seemed more joyous and celebratory than fiery protest. Two complaints, however, emerged as chief among a litany of others that drew the crowds.

Each of the speakers took aim at labour broking, a practice which the union has likened to apartheid, slavery and just about every conceivable ill in human history. But it was not only the unions speaking out against labour broking. So too were some of the NGOs that backed Cosatu’s protest.

“Today we are marching because labour broking undermines the right to collectively organise, the right to be a member of a trade union and the right to strike,” said Doron Issacs, coordinator of Khayelitsha-based Equal Education.

Patricia Dyata, general secretary of the women-led organisation Sikhula Sonke, said, “Our workers are paid R355 a week. They can’t feed their children or send them to school. Children are turned away (from school) because they don’t have school clothes.”

She said the people who work for the labour brokers in the rural areas were women and breadwinners. Labour broking took a portion of their salaries with which they could ill-afford to part, according to Dyata.

On the e-tolling that would be happening thousands of miles away, the speakers resorted to that Niemöllerism. First they came for Johannesburg, but if you say nothing, they will come for Cape Town next, they said.

The Democratic Alliance, its leader Helen Zille and Cape Town mayor Patricia de Lille came in for a bashing despite their opposition to e-tolling. One speaker accused Zille of being a representative of the National Party who kept apartheid alive in Western Cape.

Most of the speakers and the protesters, however, expressed more of a general dissatisfaction with the ANC than unhappiness over labour broking, e-tolling or even Zille. The ANC Youth League demanded that the party’s national executive implement the Polokwane resolutions, while the SA Students Congress said the party should deliver on its promise of free education. The Treatment Action Campaign demanded the ANC deliver on its promises of a better life for all.

Paradoxically, one after the other, they chanted, “Viva ANC, Viva!” DM

Photo: The spirits of the workers marching in Cape Town were not affected by the searing heat. DAILY MAVERICK/Osiame Molefe.