The curious case of one Julius Malema and the ANC's fai... 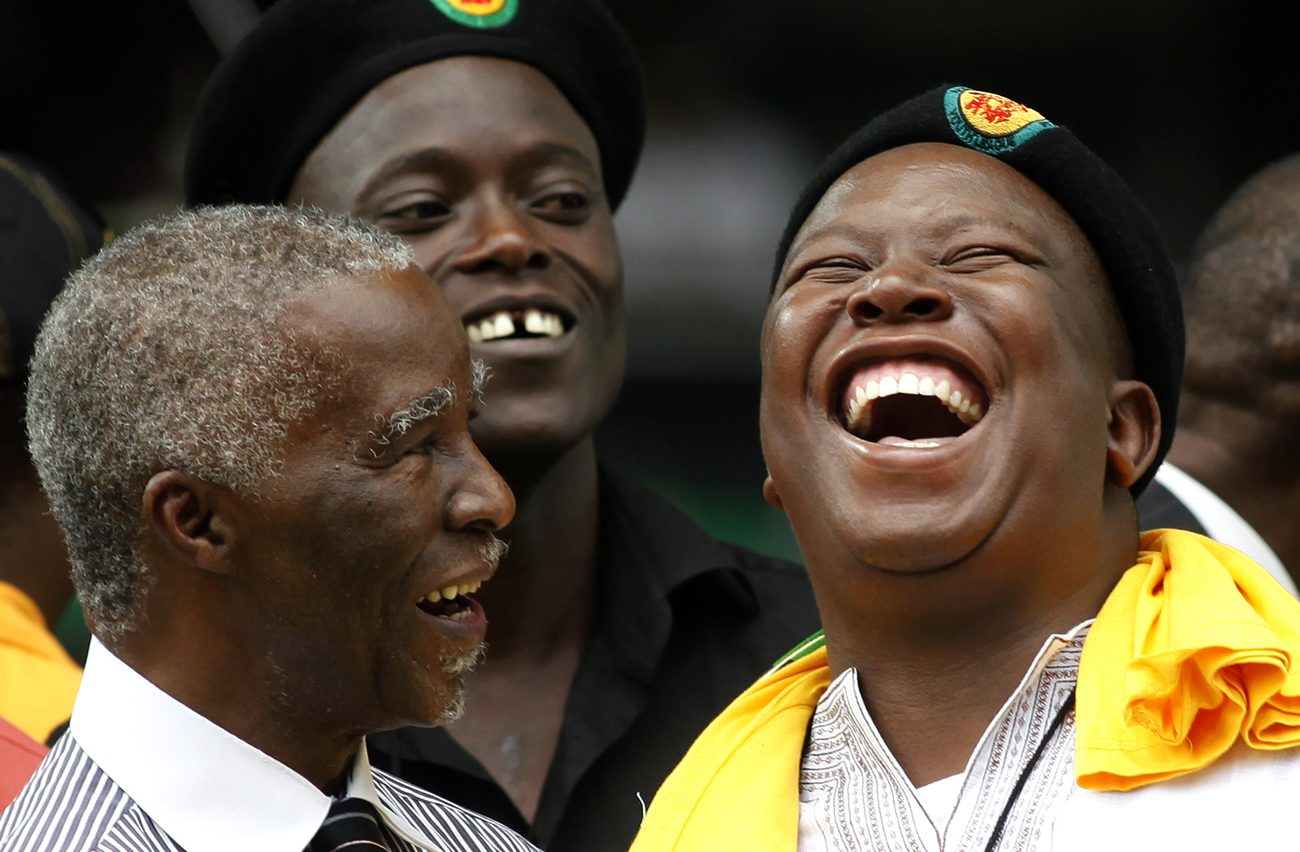 Well, now that that's happened, it's time for a little think. How is it that we got to the stage where Julius Malema seemed to be the most important person in the country? Why did the ANC allow him to go as far as he did? Could it happen again? In short, what lessons do the Malema-related events of the last two years teach us about what's gone wrong, and what can be put right? By STEPHEN GROOTES.

In explaining the creation of Malema within the ANC, we need to go back a bit, before the Zuma Tsunami. Malema’s real origins lie in what happened with Fikile Mbalula, the person who led the ANC Youth League before Malema. After the relatively sober (for a Youth League leader) Malusi Gigaba, Mbalula was one of those who started the process of losing all politeness and formality from our political speech. And he didn’t really care about the consequences. He was, to an extent, a product of his time. Gigaba hadn’t been the huge rebel-rouser (the rebel is deliberate) that youth league leaders usually are, and there was a hunger for someone exciting. But perhaps the biggest influence in the Mbalula years was Thabo Mbeki.

At that time, Mbeki was the person very much running the ANC: there was no serious opposition to him. Because of his relative youth, and the tradition of nurturing “youngsters” within the ANC, Mbalula was one of the people inside the tent who could take on Mbeki publicly (one Zwelinzima Vavi was another). As a result, people who would normally have tried to rein him in a bit then held back, because they wanted Mbeki out of the way. The Zuma-ites gave him free rein, to the point where he was the public spearhead of the Zuma campaign. In the run-up to Polokwane, Mbalula even scheduled the League’s voting for the ANC leadership to be held before anyone else’s, in a bid to give Zuma some momentum.

Mbalula’s ascent then fed into the election of Malema, who was handpicked by the then Young Lion, in a process that nearly rent the League into three pieces. In the end, it was Kgalema Motlanthe who had to preside over the final result. He’s always been pretty close to Mbalula, and so it wasn’t a complete surprise that Youth League leader’s man, one Julius, won the day.

At the same, something else was happening within the ANC. Mbeki was gone, and Zuma was now in charge, but he couldn’t dare be in charge to the extent that Mbeki had been. He rose on the platform of decentralisation of power so he simply had to give ANC members far more freedom, in process letting them to speak publicly on issues in a way few people dared under Mbeki.

Into this fertile playing field, stepped Malema, and his claim that he “would kill for Zuma”. In the days after that comment, Malema said Zuma had told him those comments were not something he should have said. But at the time, Zuma would not publicly discipline him.

There was this period when Malema was simply too useful to Zuma. When it came to the Mbeki recall, Zuma didn’t want to be seen to be leading the charge (although, according to the Nicolson Judgment that led to the recall, it was Zuma who had the most right to feel aggrieved by Mbeki’s alleged actions), and so was happy for Malema to drive a spear though Mbeki’s political torso.

It was during this period that perhaps the ANC made its biggest mistakes. Surely, if someone had said or done something then, Malema wouldn’t have got quite so big in the public imagination. But we must also remember, Zuma wasn’t nearly as strong as he is now. The ANC’s machinery, and particularly the big political brain that is Gwede Mantashe, was dealing with Cope, and trying to keep the Mbeki-ites from leaving in a massive group. And there was the 2009 general election to fight. Malema was still a distant and not very likely problem to have.

But we can apportion blame when it comes to what happened in 2010. Malema was brought before the national disciplinary panel after his comments around Zimbabwe and President Robert Mugabe. Zuma was incensed, and Malema was punished. But most of that punishment was simply not implemented.

It’s here that other problems within the ANC start to play a role. If you are going to put Tony Yengeni in charge of your political school, you are going to have a nation of political trouble. It really is that simple. The man does not have any public integrity. Not only did he defraud Parliament, he then drank while on parole, and generally cocked a snook at every law-abiding person. And where on earth did that Maserati come from? There are other problems. Because the MP’s who benefitted from Travelgate were never dealt with properly, because there are so many people in the upper echelons of the ANC who at one time or another have been accused of some serious crime (sometimes correctly, sometimes wrongly), and yes, because of the particular legal history of the president himself, there are very few people with the legitimacy needed to mete out punishment.

It’s really a failure to grasp political nettles. Another example is the famous “storming of the stage” incident at the ANC’s national general council in 2010. ANC policy head Jeff Radebe was reading out the resolution on economic transformation when Malema led a group of League members onto the stage, because the resolution didn’t include a strong enough comment on mine nationalisation. Mantashe admitted there was video footage of that incident. But still nothing was done, because that would have upset parts of the NEC at a time when Zuma didn’t want the boat rocked.

In short, because state machinery has become enmeshed in internal ANC battles, almost everyone can have some mud thrown at them. As a result, how do you maintain any kind of discipline? And we should ask hard questions of both Derek Hanekom and the rest of his committee, and of the entire national executive committee, about why Malema wasn’t compelled to pay the fine, to take the anger management classes and to attend the political school. If all of that had happened, maybe the ANC wouldn’t be where it is now.

It’s a lesson of life really. If you do the hard stuff early, it doesn’t get any harder later. The earlier you act with almost every problem, the better it is in the long run.

Based on Zuma’s track record so far, it would appear to indicate that we may well see another Malema, or Malema-like situation arising in the ANC at some point in not-so-far future. However, the NDC has now drawn a line in the sand. It seems very likely that we’ll see a real change in the ANC from here. The time of partying, public spats, saying whatever you like is over. An example has been made. Zuma is now in a position in which he can start to really be in charge, rather than just in office. While some will lament the end of an era of a more open ANC, it’s not altogether a bad thing. The party has been wildly unpredictable, people have been making statements about policy that dramatically contradict each other, leading to massive level of uncertainty. Really, a little more coherence would be a good thing. It would provide some stability to our body politic and thus to our economy.

It should also mean an end to the days when a hack like me bursts into a newsroom all bright-eyed and bushy-tailed, with the shout “Hold the lead, I’ve got Malema”. Still, in the final analysis, we’ll all be the better for it. DM