Malema to striking miners: It's time to negotiate 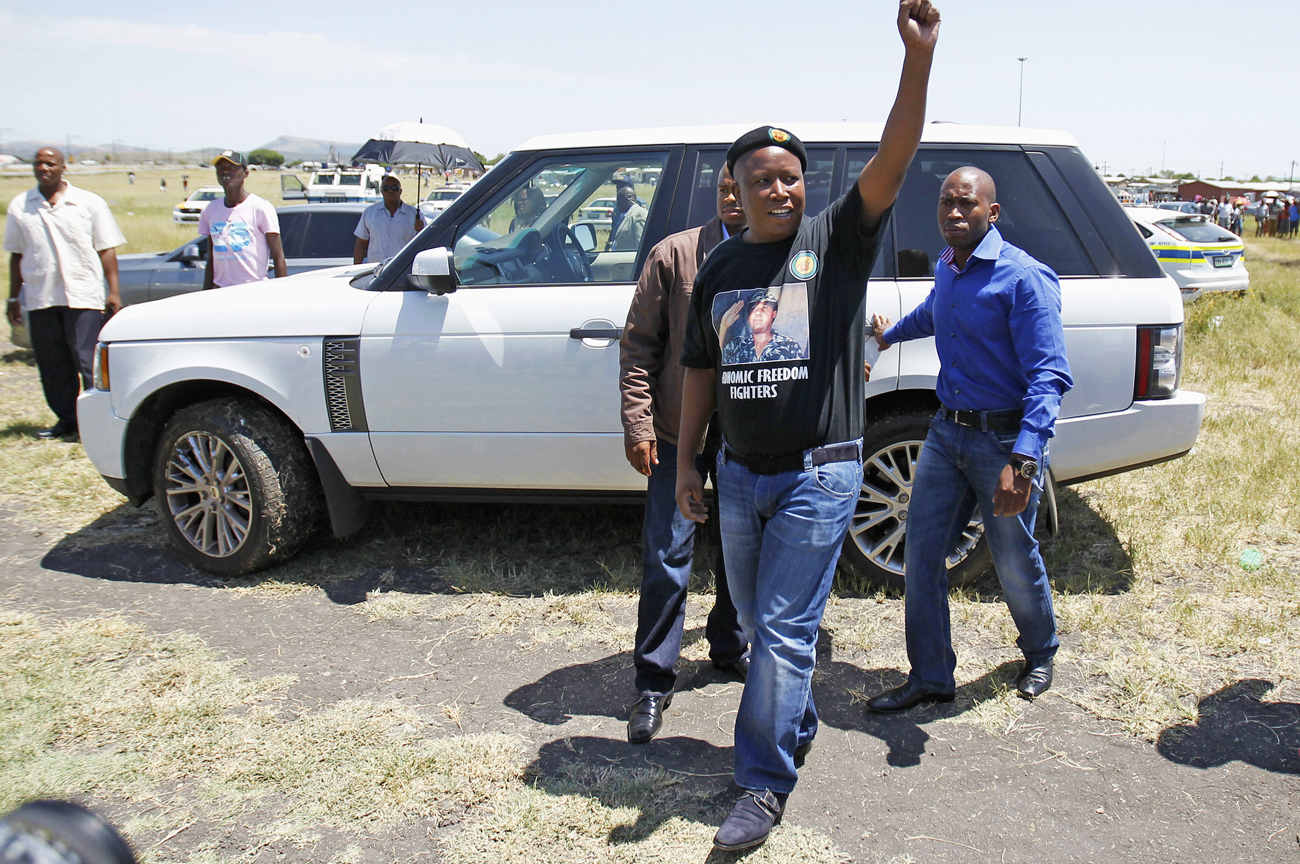 No, Julius Malema hasn’t made it to the ANC bargaining table. Keen to take the stage before his disciplinary process wraps up, he addressed striking Impala Platinum employees on Tuesday. They must return to work and negotiate, he said, sort of. Meanwhile, a hole is being mined in Impala’s profit. By GREG NICOLSON.

“The employer must be prepared to negotiate. Negotiations mean give and take,” Malema told 5,000 former Implats employees in Freedom Park. He was an hour late to the address and received a hero’s welcome when he arrived in a white Range Rover. He said the mineworkers should return to their jobs at the Rustenburg mine.

But Malema also urged his listeners to fight for what’s theirs. “Workers cannot be wrong,” he said, “Once workers decide on action, something must be wrong.” He told them the mine can easily afford a pay rise from R4,500 to R9,000. “You must benefit from the mine. If you are not benefiting, you must fight until you benefit,” urged Malema. He told the crowd to return to work as long as Impala respects their previous benefits.

Implats said on the weekend it is confident the demonstrators would return to work after it agreed with the National Union of Mineworkers (NUM) to reinstate the terms and conditions of the 17,200 dismissed employees should they be rehired. The strike is in its sixth week after rock drill operators downed tools in opposition to a selective pay rise for miners. After being dismissed, virtually the whole workforce downed tools in sympathy. Three people have died and others have been assaulted in six weeks characterised by violence.

Malema was accompanied on stage by North West Premier Thandi Modise who said the ANC would always support workers, but they must be disciplined. “The ANC will never abandon you but you must be controlled – no violence,” she said. “You must always fight for your rights but you lose the support of government and the ANC when you are violent.”

City Press reported that Malema added, “You must never allow a white person, in this case the employer, to divide you.” Divides have emerged between the Implats employees based on union affiliation and the decision to return to work. According to City Press, Malema cautioned, “Even if we are angry, we must not fight amongst us. We must not kill blacks, there must be no black on black violence. We must know the enemy and fight the enemy, not fight brothers.”

Implats spokesman Johan Theron said there had been four cases of violent intimidation towards returning workers on Tuesday morning. They have until 15:00 today to reapply. Theron said he was disappointed that less than 9,000 employees had reapplied, but Implats has maintained the majority of its staff want to return but have been intimidated by forces trying to use the strike to gain power.

“What we are seeing here is not a normal wage issue, it is a direct attack by a third party on the leadership position of the NUM to try and get a foothold and win over Impala employees,” Theron said. The Association of Mining and Construction Union (Amcu) is said to have been recruiting heavily at the Implats Rustenburg mine and stands to benefit from dividing the workforce. Currently, NUM is the only union recognised by Implats and the younger and more militant Amcu has been accused of flaming dissatisfaction and disrupting negotiations. Despite continual calls for work to resume, the NUM’s currency appears to have waned at the mine after they were perceived to have approved the selective pay rise.

Meanwhile, Impala continues to pay the costs of the six-week illegal strike. It said on Tuesday the loss of production has reached 100,000 ounces of platinum and an income of R2-billion in revenue. DM