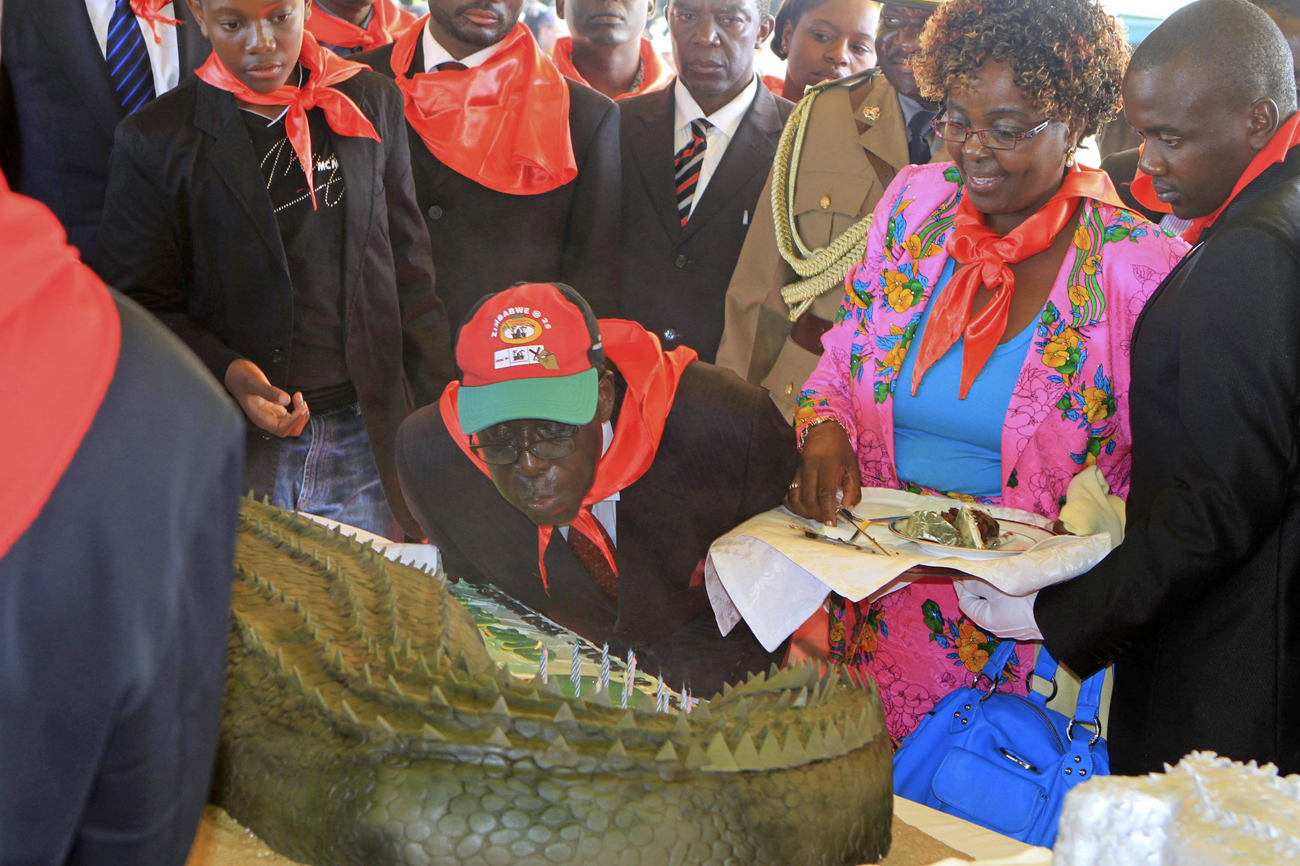 Robert Mugabe turned 88 last week, and the ageing president with the perfect skin celebrated in style this weekend with novelty cakes and a huge crowd. He also gave a stirring speech, one that revealed that age hasn’t tempered the old man’s feisty, if misguided, approach. By SIMON ALLISON.

At his birthday bash on Saturday, Mugabe looked very good for 88. He was slick in a grey suit with red spotted tie, the garlands around his neck and the jaunty baseball cap on his head keeping him in touch with the youth. And his face – is there another 88 year old with such a smooth and unwrinkled complexion? If it all goes horribly wrong for him in the next few months, he could always make bucks selling the secrets of his skin-care regimen.

Organisers claim 20,000 people came to the stadium in Mutare, although it was not indicated what proportion of the assembled party stalwarts were there for the free food and impressive variety of specially-baked cakes. There was a giant cake brought from Harare under police escort, as well as ones donated by local companies: a crocodile cake, a cake in the shape of Victoria Falls, and a cake decorated with the design of the mountains surrounding Mutare.

The climax of the day was undoubtedly the appearance on stage of the birthday boy himself, who was in fine form, using the occasion to rail against his enemies and reinforce his claims to being a benevolent man of peace.

Bob on his health, supposedly failing according to unverified reports that he has prostate cancer: “I still have the strength. No going back. Forward ever, backwards never.”

Bob on the opposition, and his love of peace: “We used to fight each other, but time has come for us to do our politics in a much more cultured way. Although our differences are political, we shouldn’t regard them as a source of hatred. No. No violence, no violence, no violence.”

Bob on non-governmental organisations (he’s never been a fan): “NGOs come with these stupid ideas, some to destabilise us. Quite often they support one party. We say to them get away from our country. Leave us to solve our political problems. Leave us to manage our own systems.”

Bob on UK Prime Minister David Cameron’s call for developing countries to respect gay rights: “Nature is nature. It has created male and female. That’s how we were born, so we reject that outright and say to hell with you. You are free as a man to marry a woman and that is what we follow. That’s what produced you and me. This kind of insanity [respect for gay rights] is now part of the culture of Europe and the United States.”

Bob on how to handle imperialists (an issue which vexes him three decades after liberation): “You must go to the head of the imperialist and knock out his brain.”

It was vintage comrade Bob: feisty, defiant, crowd-pleasing and not necessarily logical. The message was clear: Bob isn’t going anywhere yet.

This message was emphasised by the most politically important development to come out of Mugabe’s birthday week – his insistence that Zimbabwe would hold elections in 2012, a year earlier than scheduled. He described those against an early election as cowards, as knowing they would lose if they were to take him on now. The opposition Movement for Democratic Change has a rather different take on its reluctance to go to the polls, pointing out that the agreement that created the unity government also called for a new constitution to be enacted before elections were held. That is still in its very early draft stage and already running into problems: specifically, the clause that limits a president to just 10 years in office. The constitution is unlikely to be anywhere close to finished this year, which will make it very difficult for the opposition to participate in any elections, especially given there’s been little to no reform of electoral processes to ensure they are free and fair.

But none of this worried Bob on his podium as he surveyed the huge crowd assembled to honour him. At 88, he’s been used to getting his way for a long time, and it’s unlikely that he can think of any reason why this time should be different. Old dogs don’t learn new tricks. Mugabe is now a very old dog indeed, and his tricks are still working out just fine for him. DM