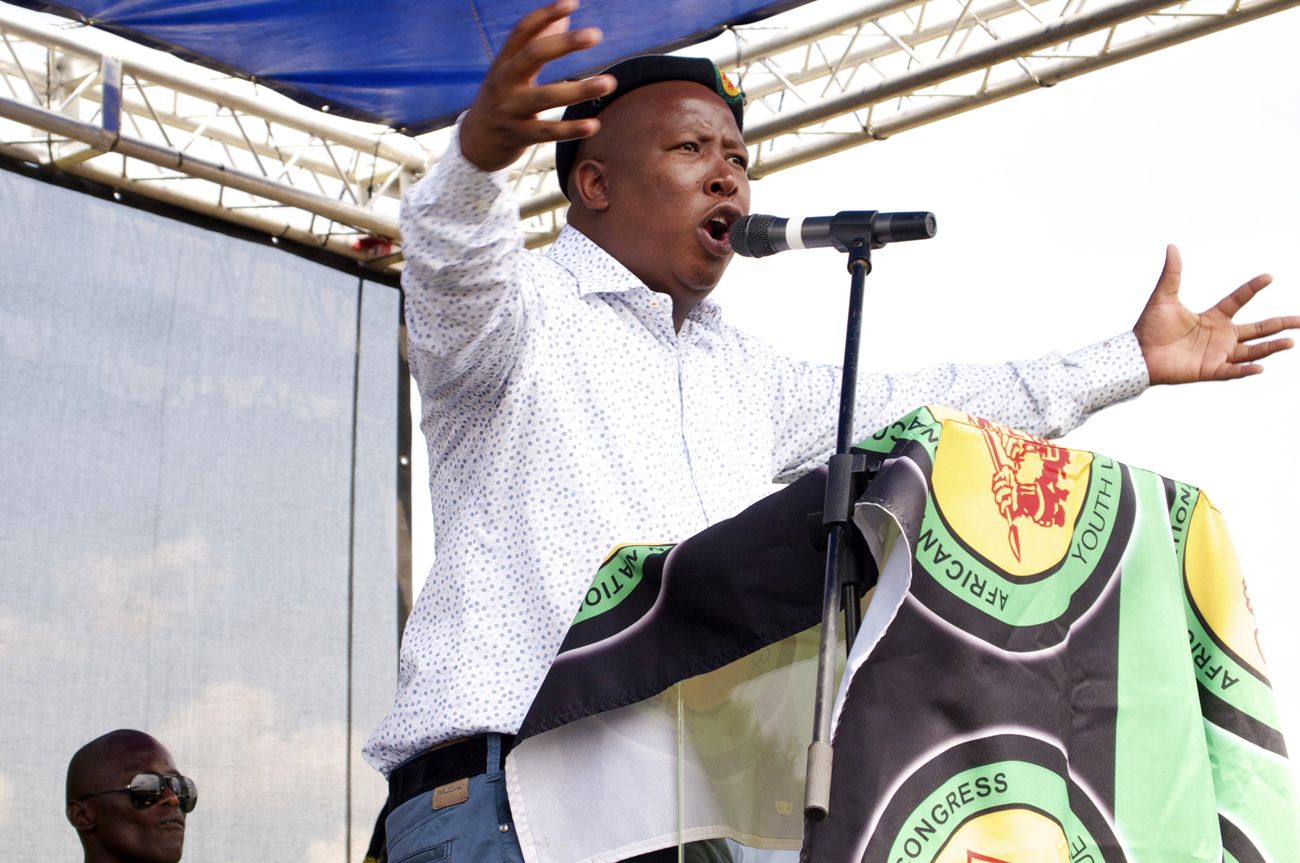 In his speech in Kliptown this Sunday, the embattled ANC Youth League leader said he wants to meet with and discuss the rift with the ANC leadership. He also condemned youth league members who turned a Zuma speech into chaos. Pity it’s too late to kiss and makeup. By GREG NICOLSON.

One hour after Malema was due to speak, a group of 80 youth league supporters toyi-toying across the dirt soccer pitch were told to march through Kliptown; they needed to garner support for the rally because of the poor turnout. Buses had arrived from across the city, but not all were full. The scene resembled a soccer match. Onlookers and ANC merchandise vendors lined the pitch while a small group of youth league supporters danced across the dirt and rocks.

Four hundred people finally turned out for the “mini rally” to celebrate the ANC centenary. It was a reasonable crowd but far less than Malema has attracted before. It might be one more reason for Juju to be on the back foot. Along with five other members of his executive, he awaits the outcome of arguments in mitigation and aggravation of the sentences handed down by the ANC disciplinary committee and upheld by the appeals committee.

Photo: Malema didn’t draw his usual crowds when he spoke in Kliptown. Supporters had to head to the streets and garner support for the rally. DAILY MAVERICK/Greg Nicolson.

The youth league leader’s political arch nemesis, President Jacob Zuma, last week appeared confident that he has the upper hand. Without mentioning Malema, the president rebuked the ANCYL leadership while lecturing a crowd on the history of the ANC. “Some people are not taught politics,” he said, and, “thus you lead in any particular way.” The ANCYL is subordinate to the ANC and its constitution, Zuma made clear.

Outright defiance remains one of the only options Malema has to continue his political career. But he made a point of rebuking youth league members who on Thursday in Cape Town disrupted a speech by Zuma on a past ANC president. They chanted for Malema, who wasn’t present, stomped their feet and threw chairs, while senior ANC leaders tried to stop the singing.

But the ANCYL wasn’t given a platform to address the party’s 100-year celebrations in Mangaung in January, and once Malema took the stage, he was keen to associate his executive with the struggle icons of old. In 1955, the Freedom Charter was signed down the road from the Kliptown soccer field by icons such as Nelson Mandela and Walter Sisulu. Malema said the ANC’s success has largely come from the youth league and the party won’t make it another 100-years without them.

Although the firebrand was calling for discussion, he didn’t waste the opportunity to have a dig at the ANC leadership. They make great speeches, said Malema, but fail to actively improve the lives of the poor. “Our families are being tortured by those who claim to be comrades. We thought the torture of our parents can only be done by the Boers, but today it is done by some amongst us. We must never be demoralised. We must continue to soldier on. If you are soldiers, you must die with your boots on.”

For Malema, that may be what happens. He reiterated his call to nationalise the mines and repeated his argument that the ANCYL executive have been unfairly disciplined for sharing their opinions while others have been let off.

But speaking to youth league members who attended the rally, it seems his ideas will continue with or without him. “He’s right about nationalisation because as things stand they (the mines) don’t benefit the majority of the country,” said Lucky Nchoe, a 23-year-old unemployed graduate. Until young people have better access to jobs and education, they will continue to complain and take to the streets, he said.

But Juju must also be concerned. With the ANC not returning his calls, and Zuma growing increasingly confident and committed to the disciplinary process, it seems only a matter of time until the suspension, or worse, kicks in and Malema will be the last person associated with the ANC leaders who met in Kliptown as the Congress of the People. DM