No accident: The death of Marie Colvin

No accident: The death of Marie Colvin 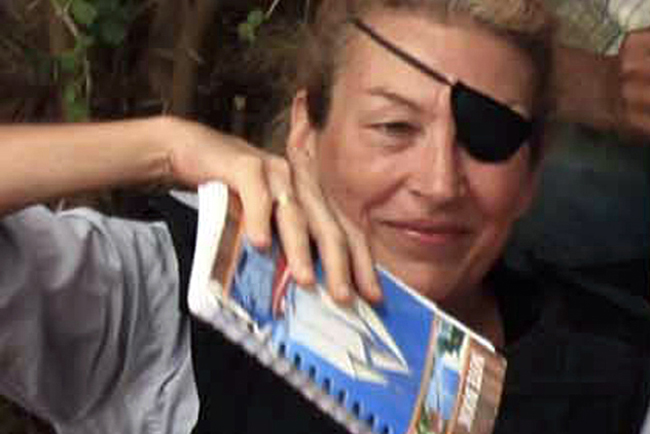 She was one of the most experienced war correspondents on Earth, a woman who’d given invaluable advice on how to handle conflict zones to some of the biggest names in journalism. But not even Marie Colvin, veteran correspondent for The Sunday Times, could have avoided what appears to have been a deliberate attack on a press centre in Syria. Will the West now finally be moved to bring about the end of Assad? By KEVIN BLOOM.

Late on 23 February, almost 36 hours after her death, the UK’s Sunday Times website was still dedicated to her memory. A scrolling series of images and links, all carrying a black square in the top left corner with the blunt statement “Marie Colvin: 1956 – 2012,” dominated the site’s homepage. Amongst the five items that the commemorative series linked to was Colvin’s final piece for the newspaper, published on 19 February. Somewhere near the middle of the article – which, to her grateful editors, must have seemed at the time like one more example of world-class Colvin war reportage – was the following chilling paragraph:

“I entered Homs on a smugglers’ route, which I promised not to reveal, climbing over walls in the dark and slipping into muddy trenches. Arriving in the darkened city in the early hours, I was met by a welcoming party keen for foreign journalists to reveal the city’s plight to the world. So desperate were they that they bundled me into an open truck and drove at speed with the headlights on, everyone standing in the back shouting ‘Allahu akbar’ – God is the greatest. Inevitably, the Syrian army opened fire.”

Colvin, 56, would be killed by the indiscriminate rocket fire of that same Syrian army within 72 hours of the paragraph’s publication. She would die alongside Remi Ochlik, 28, a French photographer. One of the consequences of her death would be that the plight of the city of Homs, of vague and remote concern to many Western media consumers, would be revealed on a scale the welcoming party could hardly have imagined.

For Colvin wasn’t only revered by her colleagues and editors at The Sunday Times, a paper for which she’d worked for 27 years – she was a model and a guide to journalists the world over. Tributes poured in from The Australian to the US’s Fox News to CBC of Canada; The Times’s competitor The Telegraph called her “fearless, committed and essential”; a BBC editor remembered her as “a real-life Katharine Hepburn heroine but braver and funnier”. Writing for Politico, a colleague from her days at Yale, who was then editor of the Yale Daily News, recalled how she got a young and irrepressible Colvin started as a features writer. And in The New Yorker, David Remnick, after relating a story about meeting (and receiving stern advice from) Colvin in the Palestinian town of Jenin, got straight to the heart of the matter: “Colvin would be the first to demand that we concentrate less on her own death than on the outrage of the Syrian Army, under the command of a tyrant too often described as a ‘mild-mannered’ eye doctor, slaughtering its own people.”

But arguably the most influential tribute came from Christiane Amanpour of CNN. Amanpour related how in 2001 her “great friend” was badly wounded in Sri Lanka when a landmine sprayed her face with shrapnel, and how she simply arrived back at work a few weeks later wearing an eye patch. The last-ever interview with Muammar Gaddafi, which Colvin secured alongside Amanpour and the BBC’s Jeremy Bowen, was touted by the CNN senior correspondent as a work of journalism that “set the tone for future international involvement [in Libya]”.

Which is indeed the sort of media heft, echoing Remnick, that’s now translating into renewed calls for an end to the regime of Bashar al-Assad. “That’s enough now,” said French president Nicolas Sarkozy on Wednesday. “This regime must go and there is no reason that Syrians don’t have the right to live their lives and choose their destiny freely. If journalists were not there, the massacres would be a lot worse.”

This last point – the tacit acknowledgment that the media’s glare has the ability to curb the excesses of even the most ruthless dictators – seems to be what ultimately killed Colvin and Ochlik. According to Jean-Pierre Perrin, a senior foreign correspondent at the French daily Liberation, who had been with Colvin a few days prior to her death, the Syrian army had deliberately attacked the press centre in which the Western journalists were working.

Noted the Guardian: “[Perrin] said the army recommended ‘killing any journalist that stepped on Syrian soil’. Journalists had been aware of this, and of reports of intercepted communications between Syrian officers that recommended killing all journalists between the Lebanon border and Homs, and making out they had been killed in combat between terrorist groups.”

Meaning, when Colvin entered Homs via that smuggler’s route, despite her 30 years’ experience in war zones from the Middle East to Africa to Chechnya to the Balkans to South Asia, she was not destined, this time, to come out again. DM

Photo: Tributes to Marie Colvin have been pouring in. REUTERS/Zohra Bensemra.