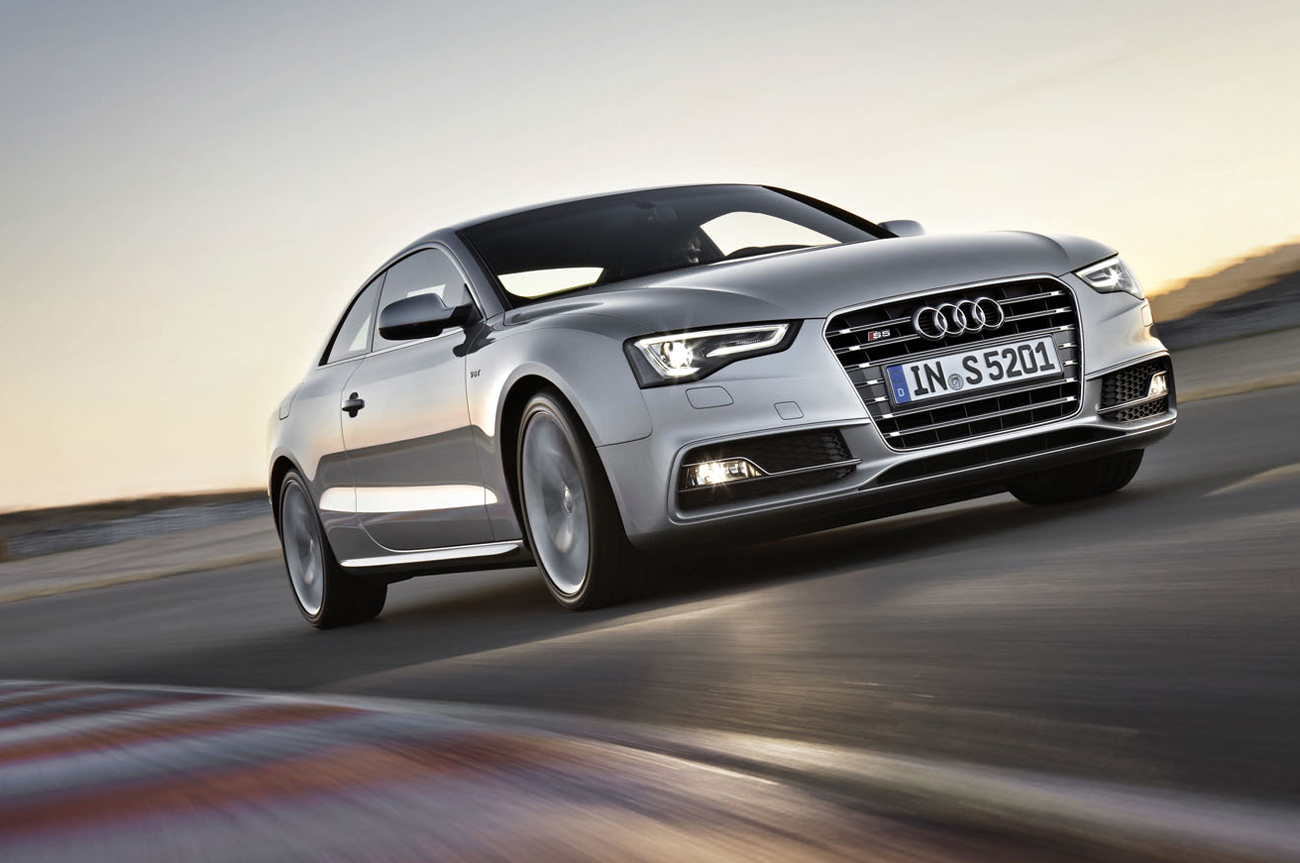 Audi’s status as a premium automotive brand has been beyond question for many years now. But one could argue that the A5 coupé put the Four Rings on the map as far as desirability and sheer aesthetic appeal are concerned. Mixing gorgeous styling with sports car dynamics, the sleek two-door has just been spruced up. DEON SCHOEMAN drives the fiery S5 version to find out if it still has the right stuff.

It’s been four years since Audi launched the A5 Coupé to an immediately appreciative global motoring audience. The two-door was soon joined by the ragtop Cabriolet version, while the addition of the non-conformist Sportback brought the A5 derivative count to three.

The newly announced update has been applied across the A5 line-up – Coupé, Sportback and Cabriolet – as well as to the S-badged performance versions of those cars. The subject of our road test is the S5 coupé, which adds an even sportier execution and more muscle to the package.

The other members of the A5 line-up offer a comprehensive array of drivetrain options. The biggest change is the introduction of a revised range of petrol and diesel power plants, all featuring forced induction, and designed specifically to achieve improved efficiency and fuel economy.

More specifically, the petrol engines on offer comprise a 2.0-litre four-cylinder with 155kW and 350Nm on tap, while those with an even greater appetite for muscle are likely to opt for the all-new, 200kW 3.0-litre TFSI V6.

These under-the-skin changes are linked to a series of cosmetic updates, a reworked interior, and a revised range of standard features.

But let’s take a more specific look at the S5. As has become the norm for Audi’s S-cars, the emphasis here is on a sporty, performance-orientated presence.

In the case of the S5, a subtle body kit and a lower stance create a more aggressive, low-slung stance that suits the coupé’s performance potential. A deeper front air dam, extended sills and a more pronounced rear apron are obvious S-car hallmarks, as are the aluminium-look exterior mirror housings, and the four, large-bore exhaust tailpipes.

The standard 18-inch wheels look almost too small for the rest of the car, making the optional but expensive 19-inch alloys an attractive and effective option. Colour coding ensures that the S5’s sleek, wind-cheating lines are emphasised to good effect, while its wide and low proportions create a powerful, unmistakably athletic impression.

Fortunately, there’s more to the S5 than visual promise. The engine compartment is home to a brand new, supercharged 3.0-litre V6, credited with 245kW of maximum power, linked to a 440 Nm torque peak.

Okay, so it’s not exactly brand new – the same engine has been powering the S5’s sedan sibling, the S4, since its inception. But it’s application here is new, meaning that it replaces the previous, 4.2-litre V8.

Traditionalists might lament that the glorious-sounding V8 is no more – but the upside is that, according to Audi’s figures, fuel consumption drops by a massive 20%, while CO2 emissions are reduced to only 190g/km.

While the V6 is identical to the unit providing the understated S4’s muscle, it sounds much, much throatier and extrovert in its application here. It’s a brilliant powerplant, with instant throttle response, and an almost linear power delivery that catapults the S5 towards the horizon with enthusiasm.

The seven-speed S-tronic gearbox is the only transmission option here, and operates in conjunction with quattro all-wheel drive. The latter provides vital traction to make the most of the engine’s urge in straight-line acceleration terms, while also providing ample poise and control when cornering. A crown-gear differential with torque vectoring adds further agility and finesse.

The chassis remains familiar S5 territory, combining front wishbones and a trapezoidal-link rear suspension with air dampers. In conjunction with Audi’s Dynamic Drive system, the dampers allow the car to be set up to suit personal preference and driving style, with an adjustment scope that varies from smooth, unfussed comfort to taut and direct responses.

Dynamic Drive also adapts the reactions of the new electro-mechanical power steering, and the mapping of the drive-by-wire throttle. In all honesty, the steering could be a bit more communicative, but it does load up convincingly enough, and allows precise steering input.

The result is a car that can be tailored to suit the driver’s mood, and the prevailing conditions. In traffic, leaving the gearbox in full auto and selecting comfort makes life behind the wheel more bearable. But opting for manual shifting and a more dynamic set-up transforms the S5 into a rapid and wieldy machine with a real appetite for the twisties.

Driven with vigour, the S5 is a car that seems to shrink around you, reacting to steering inputs with alacrity, and resolutely sticking to the chosen line. As utilised here, the quattro system is arguably at its most refined level yet, offering huge dollops of traction, yet allowing the S5 to react to steering input with precision and finesse.

Part of the reason is the torque vectoring, which optimises power between the rear wheels, and thus adds a further dimension of grip and composure. Yes, it flatters the driver, but also ensures all that urge is optimally applied.

In straight-line terms, the S5 is no slouch, recording a claimed zero to 100km/h acceleration time of 4.9sec, and going on to an electronically governed top speed of 250km/h.

While those figures seem entirely plausible, real-world fuel consumption is considerably higher than Audi’s figures suggest: the best you can expect on the open road is around 12 litres per 100km, with an about-town average of between 16 and 17 litres/100km.

The S5 may be a two-door coupé, but accommodation is spacious enough four, with the wide-opening doors making access to the rear seats relatively easy, if not convenient. The execution is to Audi’s usual, elevated standard, but compared to the more current A6 and A7, some elements of the layout are starting to show their age.

Given its senior status in the A5 family, the interior is comprehensively equipped, and offers most of the expected bells and whistles. S-specific features include the carbon fibre-look finish of the centre console, and the high-backed sports seats, trimmed in a mix of Alcantara and leather.

The inherent quality of the cabin is tangible and peerless, and an efficient ergonomic design ensures an intuitive interface between car and driver. A grippy, thick-rimmed steering wheel is home to multifunction controls, while the customary multimedia interface allows easy access to key vehicle systems, utilising a series of menus that can be called up on the central colour display.

The A5 coupé – and the S5 version in particular – has been one of Audi’s most compelling brand ambassadors from the word go. This latest version retains all of the original’s appeal, but adds new visual zest, while introducing significant changes under the skin.

Of course, some will miss the V8’s growl and character. But given the increasingly stringent emissions laws in first-world markets, those big, brawny lumps are likely to become both obsolete and irrelevant, except in an historic context.

Push the nostalgia to one side, however, and even the most ardent V8 fans will have to admit that this force-fed V6 delivers on all the important fronts (including the soundtrack), ensuring that the newly updated S5 is one of the brightest stars of the current Audi show. DM