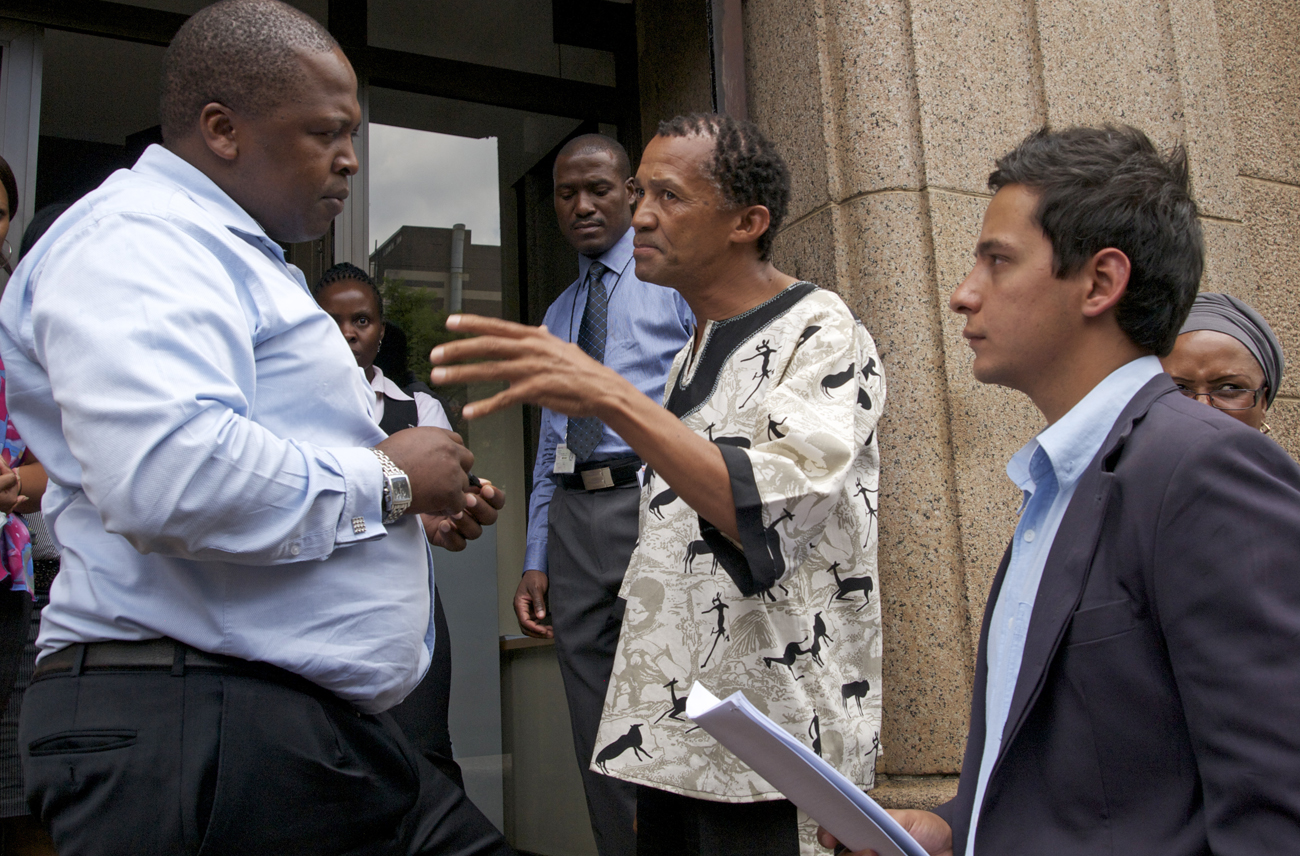 They might seem unlikely bedfellows but AfriForum Youth joined the Khoisan community on Tuesday in a protest over the indigenous group’s land rights. With both minority groups feeling they have no representation in the current government, they might have more in common than you think. By GREG NICOLSON.

Supported by AfriForum, 15 members of the South African Progressive Civic Organisation (Sapco), a Khoisan community group, handed a memorandum to the department of land affairs on Tuesday. There would have been a protest, they said, if the Khoisan were afforded the same rights as other groups. That was just the first of their grievances.

“United we stand!” yelled a Sapco member. United – perhaps. Imposing – hardly. Busloads of Khoisan had been mobilised to march, said Debbie Benjamin, secretary of Sapco, but their application to protest had been rejected. She asked why other marches had been recognised, but theirs was denied because unrelated protests caused damage. It’s one example of widespread discrimination against the Khoisan, she said.

Sapco, founded two years ago, called for the Khoisan to be recognised as South Africa’s first indigenous nation and for their land claims to be processed. “We are still suffering. We are still marginalised. It is the same as apartheid,” said the Sapco’s deputy president Stephen Katz. “Somebody else is sitting on land that we are supposed to have.”

The demonstration was supported by AfriForum Youth. “From the bottom of our hearts, we’d like to say thank you for your support,” Benjamin told Charl Oberholzer, national chairman of the lobby group’s youth arm. Thankfully, no AfriForum members turned up with charcoal faces, as happened recently. The organisation known particularly (though not exclusively) for protecting the interests of the Afrikaner community offered financial assistance after Sapco approached it.

But the union and a once-off financial offering that may lead to knowledge transfer, isn’t as odd as it seems. “They want to take our language away,” said Sapco member Joseph Marble, an author who participated in student uprisings resulting from the 1976 Soweto protests. “Afrikaans is our language. It belongs to the Khoisan.”

Oberholzer explained that AfriForum is first and foremost an Afrikaner interest group but wants to help other minorities where possible. “The Khoisan approached us and we thought it important to tell the ANC that minority groups are here to stay,” he said. If the ANC wants to propose policy based on history, it has to represent the country’s ‘historical complexities’,” said Oberholzer, who said the green paper on land reform simplistically plans to transfer land from the white minority to the black majority.

Katz read the Sapco memorandum to a land affairs representative who would not comment on the issue. It demanded President Jacob Zuma lead an urgent intervention into the processing of land claims by the Khoisan community and provide restitution to those dispossessed by colonialists before the passing of the 1913 Land Act, the basis for physical and financial land restitution since 1994. He called for the Khoisan to be included in resolving land reform issues despite the Constitution affording privilege only to those dispossessed in the last century and evictions of Khoisan to cease while the issue is resolved.

The land reform green paper states that its “spirit” comes from “the corrective measures necessary to tone down the anger, bitterness and pain of those who have been subjected to” the “systemic denudation and impoverishment of the African people (African inclusive of the San and the Khoi and their decendents[sic])”. But Sapco and AfriForum both claim the proposed policy will limit the beneficiaries of land reform to black Africans only.

Ben Cousins, professor of poverty, land and agrarian studies at the University of the Western Cape, disagreed. In an email to iMaverick, he said there was “no evidence that the green paper proposals, such as they are, exclude the Khoisan”. He continued, “The cut-off date for a valid claim is 1913 (the date of the first Land Act). So dispossession of land before then does not qualify, and hence many Khoisan claims are excluded. They can, however, make an application for land under the redistribution programme, and no doubt some groups have.”

Cherryl Walker from Stellenbosch University said, “It is not clear in what way the green paper excludes people claiming Khoisan ancestry from land reform or land restitution, nor what land is being referred to and on what basis this group is representing the people who may once have lived there.” She said the grievances might result from outstanding claims to the Land Claims Commission.

But Sapco’s chief issue, a similar complaint to that of AfriForum and the Afrikaners it represents, is its belief the image of the Khoisan has been tarnished and their importance in the country’s history glossed over. Katz said he wanted to dispel the “untruths” about the Khoisan. Sapco is planning to take its grievances to the United Nations. “We are the Khoisan. The time has come that we should tell the world that we have waited too long (to tell them),” said a Sapco member.

In August 2011 Zuma promised to put a new a bill before Parliament that would recognise Khoisan communities, councils and leaders. “It provides for representation in houses of traditional leaders and the participation of Khoisan leaders in municipal councils,” said Zuma. The Khoisan are still waiting. Sapco feels it doesn’t have a voice. Its last memorandum was ignored and it is not being represented by the government. It’s a sentiment AfriForum knows well. DM