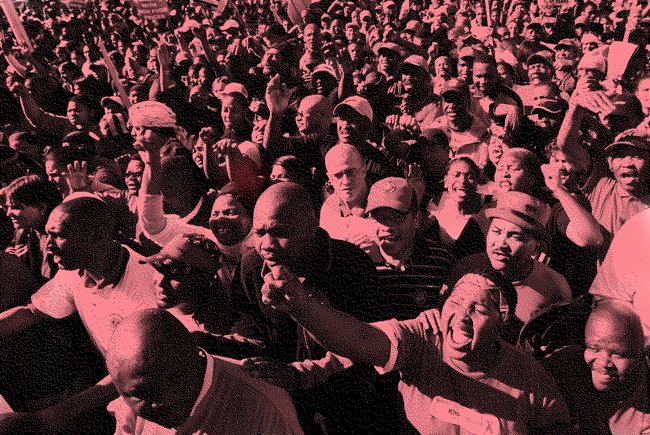 Fresh from having flexed its anti-corruption muscles in Cassel Mathale’s Limpopo, Cosatu has turned its attention to the Free State. The trade union federation, through its affiliate the South African Municipal Workers’ Union, fired a shot across the bow of Premier Ace Magashule’s troubled ship on Monday. Magashule is sure to heed it. By OSIAME MOLEFE.

Samwu provincial secretary Mokone Miya said almost all the municipalities in Free State were marred by “blatant” corruption, irregular awarding of tenders, ghost employees, nepotism and just about every maladministration-related malady imaginable. To leave no doubt Miya listed all that was not well in the province with specific incidents, locations and names.

“These issues also have a potential of ruining our relationship with the ruling party, the African National Congress, and our alliance partners,” Miya said.

In 2009, before the relationship between the ANC and Cosatu in Limpopo went horribly awry, Mathale received a similar warning from Dan Sebabi, at the time having been elected the federation’s new provincial secretary. Sebabi warned Limpopo’s ANC leadership they were ignoring Cosatu’s submissions to the provincial executive committee at their peril. But ignore Mathale continued to do.

In June 2011, as sordid detail upon detail continued to emerge of Mathale and suspended ANC Youth League president Julius Malema’s expansive business interests with the Limpopo government, Sebabi fired this salvo: “The premier and all other public representatives from the ANC-led alliance, should choose whether they want to be business people or public representatives.”

Sebabi also announced the federation would hold an anti-corruption conference and would march to Mathale’s office to demand the MECs and officials be recalled. By October, following the march, it seemed clear to Cosatu that Mathale had chosen business over public duty. The federation called for him to resign with immediate effect and has since been actively campaigning to see Mathale go.

But Magashule, the longest-serving ANC provincial secretary, is no Mathale, so he isn’t likely to be spoiling for a fight with Samwu, Cosatu or anyone. Like ANC president Jacob Zuma, the man he likely supports heading into the party’s national electoral conference, Magashule is wily and seldom rocks the boat.

For one, he welcomed the national government’s intervention in two of his province’s departments, including the troubled roads and transport department, projected to overspend by R449.9-million in the current financial year. The national treasury had also found the department had contravened the Borrowing Powers of Provincial Government Act and the Provincial Financial Management Act in awarding 23 road tenders without proper procedures.

Free State roads and transport MEC Butana Komphela, according to a Volksblad report, blamed the awarding of the 23 tenders on his predecessor, Thabo Manyoni, now Mangaung mayor. Komphela reportedly said the tenders were awarded by verbal agreement to friends of officials and politicians.

The premier, however, only spoke about extending the disclosure of interests requirement to all public servants, not merely senior management service employees. This did not go far enough for Cosatu. Mashishi told Daily Maverick, Cosatu wanted to see an outright ban on all state employees doing business with the state.

“We believe a person that occupies a public office will always have a conflict of interest when doing business with the state. How do you separate your interests? You can’t. It is not serving the purpose of a developmental state to allow that kind of process to continue,” Mashishi said.

He said Cosatu stood arm-in-arm with Samwu in their grievances, adding there would be no equivocation when it came to corruption. Mashishi reiterated that, should these issues not be resolved satisfactorily, the union’s relations with the provincial ANC would be dealt a significant blow.

William Bulwane, Magashule’s spokesman, was surprised at Samwu’s statement. He said he was there when Samwu met with the Free State ANC provincial working committee on these very issues.

“We could not come up with solutions at the time and resolved to take the matters (listed in Samwu’s statement) to the municipalities to hear both sides of the story before proceeding,” Bulwane said.

Brushing aside concerns about relations with the unions, Bulwane said the ANC in the province had taken concerns expressed by its alliance partners seriously. Magashule was equally cool when speaking to the Sunday Times about the state of his under-threat chairmanship of the province. “I’m very comfortable, very confident and relaxed,” he said. “There is no problem. Life continues.” DM

Photo: Cosatu is taking the fight against corruption to the Free State province. REUTERS/Mike Hutchings.