A man at a miniskirt march 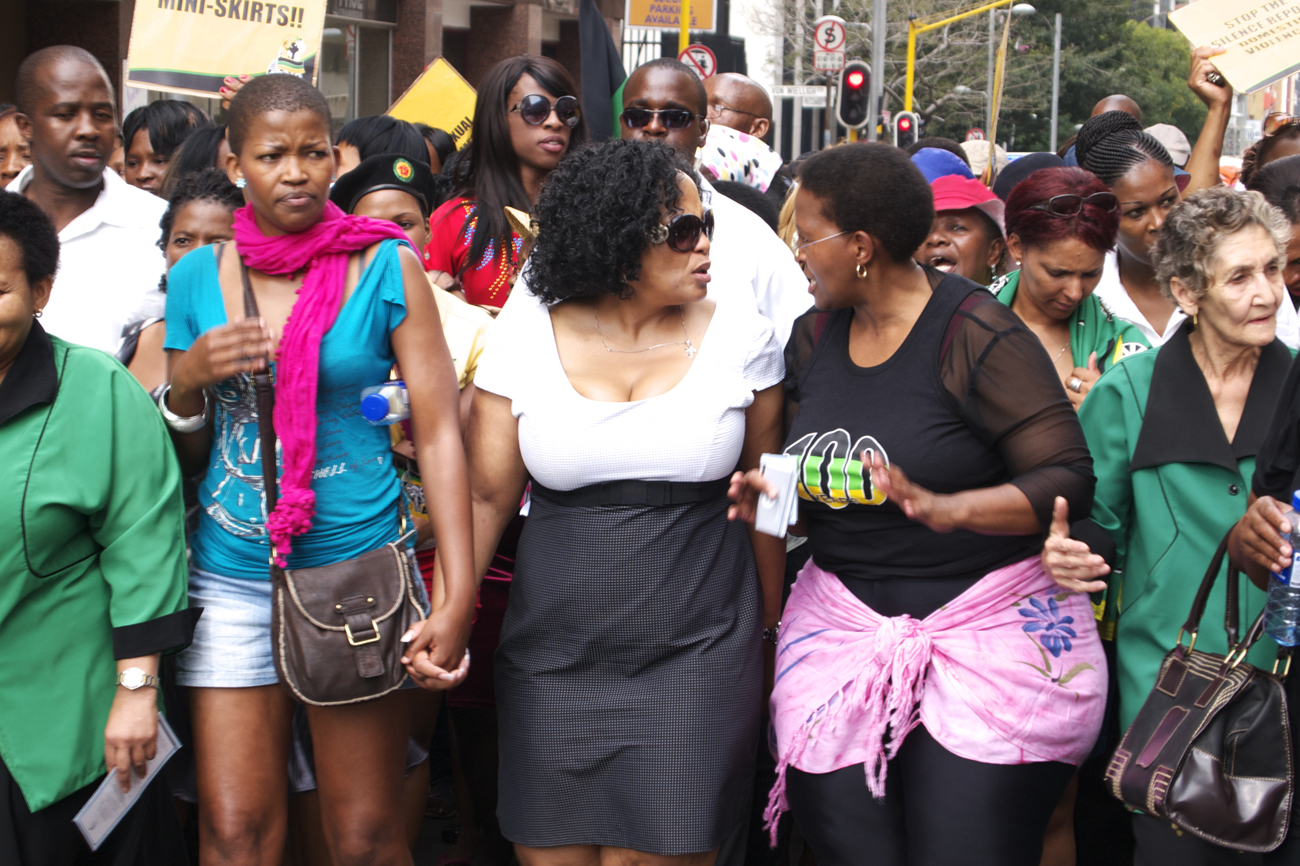 Protestors marched to the high court in Johannesburg on Friday demanding the rights of women be respected and for the end of harassment at taxi ranks. GREG NICOLSON joined the crowds of men watching the miniskirt march and wondered about their role in preventing abuse.

The weekend started early on Friday as I filled a cooler box and headed to the miniskirt march in town. It was an assignment any young, male reporter would welcome. Usually the legs don’t come out en masse until at least Friday evening, which is often matched by a queue, a rope barrier and a bouncer who says, “Not in that fedora, son.” So at 14.00, I was on the way to a sundowner with some of Jozi’s finest, in some of Jozi’s skimpiest, without having to pay an entrance fee. In fact, I hoped I could simply enjoy the party from the tray of a bakkie – a rolling paradise of beer and braai.

The ANC Women’s League march supposedly started at Bree street taxi rank. It’s good to keep these mini-skirt gatherings down the road from the courts, just in case someone dares to arrive in a knee-length number or, dare I say it, a maxi dress, I thought. I rolled up to the rank with my eyes peeled and camera handy. But there was no mass gathering of miniskirts. As soon as I arrived, the rain put a dampener on the excitement as commuters and hawkers sprinted for shelter. Braving the downpour, journalists explored the circumference of the taxi rank, a multi-level brick building, effectively a car park framed by stalls and drowned in music that’s played too loud. There were workers bundling bags to the right bay, students on the way home and taxi drivers shepherding passengers into their vans, but no short skirts.

“Eureka!” I thought when I finally saw two young women, displaying considerable amounts of leg, crossing the road towards the commuter hub. Two women was hardly a gathering, but a lead worth watching. They turned the corner into the taxi rank and were jeered by two of the five men leaning against a concrete wall. I couldn’t make out the exchange, but it was clear the advances were unwanted. One man stepped out and tried to grab hold of the second woman’s wrist. She yanked it away and the men yelled after them. The men rested on their wall while the women hurried off, ignoring the stream of comments.

Like everyone else, I watched and feigned disinterest. Friday’s ANCWL march would protest against the abuse and discrimination of women and children. It was organised after two young women were harassed by a mob of men at Noord Street taxi rank in December. One of the women was wearing a miniskirt and the other’s bra straps were showing. As they left the taxi rank, they were hounded by a large group of men who jeered and groped them. After the prolonged harassment, police eventually rescued them.

As I stood, hidden from the rain, watching what looked like harassment at the Bree rank, I remembered my female friends and the women I’ve interviewed who have been victims of harassment and abuse. They had different relationships with their tormentors, who included family members, teachers, schoolmates, partners and strangers. But in each case the perpetrators had branded the women with a traumatic memory, often hidden like a secret tattoo. They were harassed, held, groped, molested and raped.

A text message told me the miniskirt march was already at the Noord taxi rank and I scuffled through the CBD so as not to miss it. A crowd of 200-women was marching slowly towards Pritchard Street. It was led by Gauteng Premier Nomvula Mokonyane and Lulu Xingwana, minister of women, children and people with disabilities. In the front line were members of the ANCWL wearing the standard women’s league green shirt and black skirt. The premier had a white and grey dress with matching shoes. Holding her hand was one of the young women harassed at Noord taxi rank in December.

As the group entered Pritchard Street, the woman, in a denim miniskirt, blue t-shirt and pink scarf, left the premier’s side to join other young women to dance in front of the crowd. To cheers from the marchers and in front of a large crowd of interested onlookers, they held their chests while dancing for the cameras. While the protesters were almost all women, many men turned out to watch them pass. A few joked about the march’s concept. We should congratulate the ruling party for perfecting the political mini-skirt, I laughed to myself. Over 100 years, the ANC has found the right balance of green, gold and black for all skin tones. John Dube would be proud. Never forget: the ANC is a party committed to non-racialism; all women shall have the right to be flattered by a frugal skirt in the colours of the ruling party.

The march ended with speeches outside the high court. Mokonyane said women deserve to have their rights respected at taxi ranks. “As women, we are proud of our bodies. We are proud of our miniskirts.” Xingwana condemned gender based violence and threatened to close the Noord taxi rank if harassment continued. “Real men don’t rape women. Real men love and respect women,” she said. Basic education minister and ANCWL president Angie Motshekga, in a sky blue dress suit rather than miniskirt, said women have the right to dress how they choose. All the speakers condemned the harassment and abuse women regularly face and called on society and government to uphold their rights enshrined in legislation.

From the stage, justice minister Jeff Radebe turned to the crowd as he signed a memorandum committing the justice system to support the rights of women and children. Dressed in black, he was there, he said, because he is a fan of miniskirts. It was a sentiment shared by many of the male onlookers.

The march was dominated by women and while men lined the streets, few participated in the march or responded to the crowd’s call for the end of harassment. One young man told it straight to Sapa journalists. “We like to see the young women in the minis, but the old ones, ag, shame!” The march was something to gawk at on a Friday afternoon rather than an issue to engage with.

Most of the men I spoke to know women who have been abused and harassed, and agree they should be respected. But when it comes to rallying for their rights, it seems we’d rather stand back, lean against a fence and check out the miniskirts. We’d rather make jokes than ask ourselves what our values are and whether are we defending them. Rather than standing up against abuse at a taxi rank, whether it is Bree or Noord, we silently condemn the abusers and let the harassment continue. DM

Photo: Gauteng Premier Nomvula Mokonyane led Friday’s miniskirt march, organised by the ANC Women’s League, against the harassment of women for how they dress. At her side was one of the young women who made headlines in December after being harassed by a mob at Noord street taxi rank. DAILY MAVERICK/Greg Nicolson.