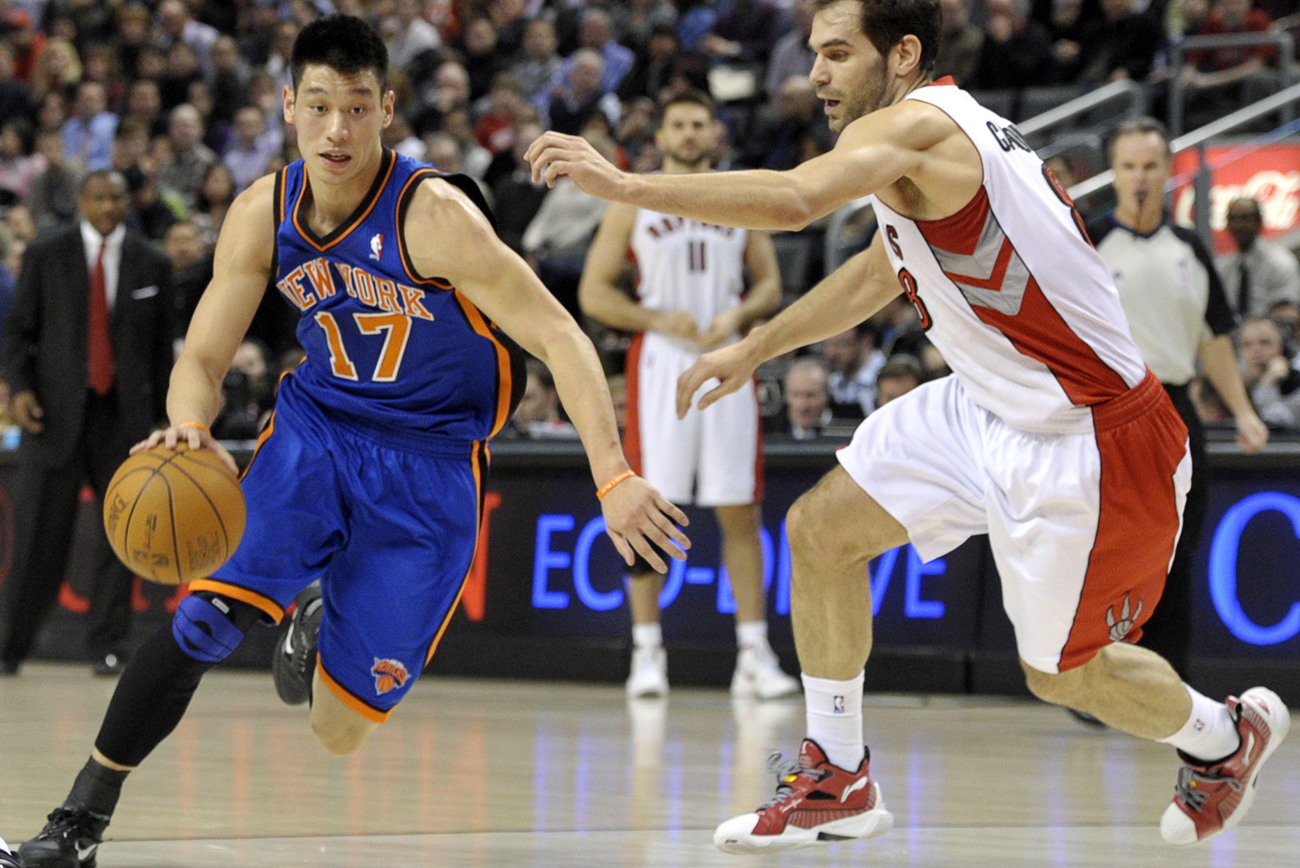 China’s heir apparent, Xi Jinping, is in Washington, schmoozing with the men and women with whom he shall soon wrangle on the world stage. No one in China cares. Instead, 150 million microblog posts later, the NBA’s Jeremy Lin is the biggest thing in China. And two weeks ago, no one knew his name. BY RICHARD POPLAK.

It is a Lin-sational moment, one of about a hundred or so that have occurred over the past 10 remarkable days. The score is 87-87, New York Knicks vs. the Toronto Raptors. Jeremy Lin, who two weeks ago was warming the bench for an underperforming Knicks side, has been having a rough night. He’s been double-teamed, battered, abused. For the six games he’s been in the starting rotation, the Knicks are 6-0. The stars who routinely cheer the team on from the sidelines have been dimming, because there is a greater celestial entity in their midst. And here’s why:

Just a few seconds from the buzzer, score tied, Jeremy Lin is dished the ball, rocks back on his heels, and throws a perfect three pointer that swishes into the basket with a gentle hush. There is a long second of disbelief, before the Knicks celebrate as if this was Game 7 on a playoff run.

Just another Jeremy Lin moment in a long string of them. Two weeks ago, no one knew his name. Now, he’s the biggest story in sports, and the biggest star in China. Curiously, Lin isn’t properly Chinese. He’s also a devout Christian – not a minority especially beloved by the Chinese authorities – and that’s where the story goes off the rails.

How, exactly, did Jeremy Lin get so big, so fast? For one thing, he plays basketball in the biggest sports media market in the world. Make it in New York City, and you can make it anywhere, Beijing very much included. The Knicks were on a tough run, and were looking for a supporting hero while their superstar, Carmelo Anthony, was nursing an injury. And Lin, underdog of underdogs, stepped into that role and has been scoring prodigiously, in clutch situations, ever since.

More significantly, the NBA thoroughly understands its minority markets, and has long focused on China. Lin was first embraced by Asian Americans, who haven’t had anyone to cheer since Yao Ming took his battered body back to China. For every three pointer at the buzzer, Lin’s legend grew. Within a week, on the backs of Asian-American Tweeters, Lin was on the front cover of Sports Illustrated.

To compound his legend, he is – like last year’s NFL quarterback sensation Tim Tebow – not shy about thanking Jesus for every well-crafted play. Lin is as Christian as they come, and nothing sells like Jesus in the United States of America.

Which does absolutely nothing to explain the love in China. If all of this isn’t baffling enough, consider the fact that Lin is, properly, a Taiwanese American – not a Chinese American. Under the mushroom cloud of his fame explosion, the old grievances are scrabbling around, looking for light.

Lin’s ancestral home is the city of Jiaxing, in the province of Zhejiang. That said, his maternal grandmother bolted for Taiwan in the late 1940s, during the Chinese civil war. That’s where Lin’s parents grew up, before moving to the United States, where Lin was born. That he is twice removed from Jiaxing hasn’t stopped the Zhejiang Communist Party from lauding him as a local lad.

The stakes are surprisingly high. Since Yao Ming decamped to Houston to play for the Rockets, basketball has grown massively in China. As many people play the game on the mainland as there are people in America – 300-million and rising. Should Lin identify as Taiwanese, it could be read as further proof of the island’s legitimacy and success. Which is why the Communist Party is doing what they can to claim him as their own.

For his part, Lin seems oblivious to all the hooplah. His main man, Jesus Christ, is his major preoccupation. This opens up further issues for the Chinese government, who are not fans of their Protestant minority. Lin hasn’t quite caught on as a Chinese Christian hero, although the microblog community is starting to embrace him as such. That would be a development the CCP would not like. But there is less than no chance of Lin tampering down his faith. In America, sports and religion are ever more linked. It’s an integral part of the fascination fans have expressed for this new wunderkind.

In two weeks, Jeremy Lin may well be a distant memory. If he doesn’t keep up his incredible run of success, he will go back to warming the bench, and that will be that. Although skills of the sort he possesses cannot be faked – as far as this writer is concerned, he is the real deal. With every clutch point he scores, with every magical three-pointer, his status will grow. As will the geopolitical wrangling over his ancestry. If anything could tip China and Taiwan into full-blown conflict, it might be the New York Knicks’ newest superstar. DM