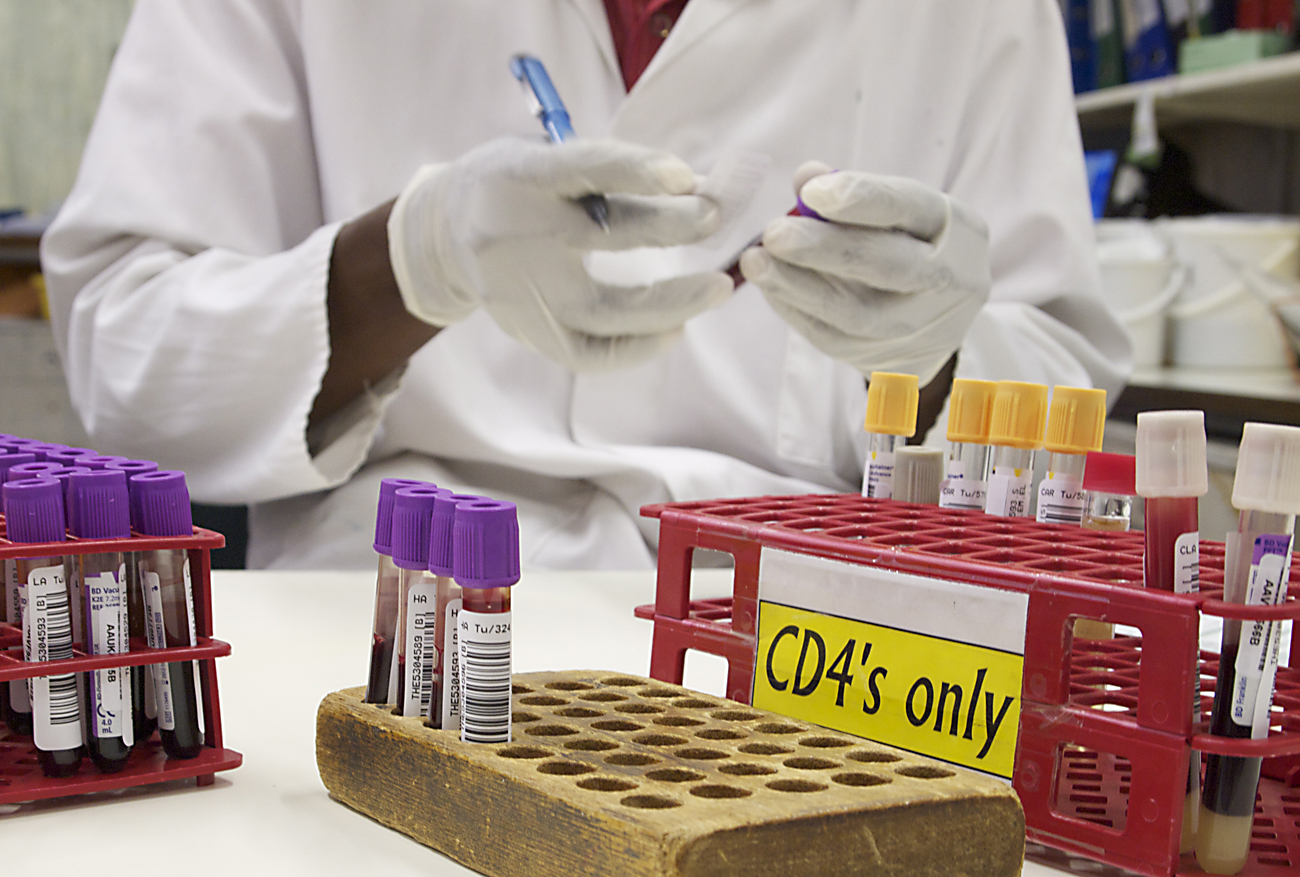 Stakeholders remain doubtful the Gauteng health department will change its pattern of late and non-payment to service providers and want the national treasury to take a greater role since intervening in December 2011. This is despite MEC Ntombi Mekgwe’s comments that the department has got its books under control after a R700-million payment to creditors. By GREG NICOLSON.

The National Health Laboratory Services (NHLS) centre at Helen Joseph Hospital in Johannesburg is in the basement on the edge of a labyrinth of tunnels. The NHLS has about 260 laboratories in South Africa and services 80% of the population. It handles all state hospital and clinic pathology tests. In the lab at Helen Joseph, thousands of vials and medical samples are being processed through pathology tests to help doctors determine diagnoses. The 100-plus workers are scheduled across 24-hours, seven days a week. But the centre closed last weekend as NHLS awaited payment from the provinces, meaning a patient needing urgent verification of a doctor’s diagnosis would need to go elsewhere. It’s open once more but the ordeal hardly inspires confidence in Gauteng’s beleaguered department of health.

Health MEC Ntombi Mekgwe told Talk Radio 702 that with the help of the national treasury, the situation is now under control. Despite reports that treasury was funding the debt repayment, the money came from diverting funds from other departments, which hadn’t spent their full budget and cutting unnecessary spending. By the end of March, R1.6-billion, a chunk of what’s owed to health service providers, will be paid, said the department. It’s trying to cut costs by suspending administrative hiring.

But the Democratic Alliance and service providers have complained for years that the department has not been paying its bills on time or at all. It had R2.1-billion in accruals older than 30-days at the end of 2011, said national finance minister Pravin Gordhan at a committee meeting on interventions in the provinces recently. Gordhan intervened on the basis of section six of the Public Finances Management Act to stabilise the Gauteng health department and provincial treasury.

Spokeswoman Bulelwa Boqwana said national treasury was offering Gauteng expertise and had deployed some of its own staff to help the department reach a stable position. “Recommendations have been made by national treasury on how the health budget needs to be restructured to ensure that the sector meets its obligations… However, fixing the budget alone does not guarantee stability of the finances. Other areas like HR management, financial management, etc. needs to be addressed as well. Provincial treasury is working closely with the health department to address these challenges,” said Boqwana.

She said national treasury had not approved R1-billion for Gauteng health to pay outstanding invoices, as the Treatment Action Campaign recently stated. “There will be no bailout,” said Boqwana. “No other options have been discussed. We are confident that the province will, with limited support from national government, address the problems it faces.”

But after years of broken promises, there’s doubt the provincial department will be able to balance its books with only limited help from the national government. Treasury has been offering help since October, yet the situation still deteriorated to the point where six of Gauteng’s NHLS labs had to close while waiting for payment. The closures shouldn’t have come as a shock. “We are at a critical point. The service is closing down. This is no exaggeration,” NHLS chairman Sesi Baloyi told the parliamentary committee on health in 2011. Before the recent payment, Gauteng owed the NHLS R700-million, which combined with KwaZulu-Natal’s debt amounted to 82% of the group’s outstanding invoices.

Photo: The closing of the labs was not a shock as they had reached critical point financially. Greg Nicolson/DAILY MAVERICK.

“It’s shameful. This isn’t the Eastern Cape. This is Gauteng,” said DA Gauteng health spokesman Jack Bloom. “There’s been a major failure on the revenue side on the one hand,” and the province has huge amounts of uncollected revenue from departments like police, correctional services and justice, as well as provinces such as Mpumalanga, he said. “The really criminal thing is that they are owed R1.4-billion from other provinces. That’s been a bugbear for a long time. Who owes who?”

The system is let down by poor administration. There’s private medical aid revenue not being collected and patient debts not paid, and sometimes hospitals neglect to send medical aid invoices. “We’re talking about large amounts that could be collected,” said Bloom, a long-time critic of the province’s beleaguered health system.

He accused the department of “playing games” with its R700-million “haircut” by using capital expenditure to pay for current expenses. “It’s not enough,” said Bloom, who pointed out that much of the payment would have been paid anyway and hardly affects the mountain of debt. Kaamini Reddy from NHLS agreed. “They are basically paying their bill. Their current bill was about R90-million and they paid R150-million.”

With little trust in the provincial leadership, Bloom is calling for outside help.  Gordhan has to give something to help, he said. “The department should not be rewarded for overspending but Pravin’s guys need to be there”, he added, “With very strict controls, but they need to be there”.

After a meeting with the MEC last week, Sibongile Tshabalala from TAC was surprised to learn on Tuesday that national treasury was not offering financial support. The TAC was led to believe R1-billion had been approved for the health department to pay its debts. Tshabalala, who admitted it was difficult to get clarification from the MEC, said she was happy with the recent developments but called on Gordhan to provide money accompanied by close scrutiny.

The Gauteng department of health was not available to comment, but Mekgwe has previously assured the province that there is a plan to pay the department’s debts and that this was not another false promise. In a review of 2011, she outlined her plan. “With the cooperation of the Gauteng department of finance and the premier, we have a plan to deal with our financial challenges. The focus of the plan is to find resources within the provincial government. This includes reprioritising our budget and getting other provincial departments to assist the department of health. The national government will help us recover all debt owed to us by other government departments.”

Reddy, from NHLS, was doubtful the government will pay its debts on time but welcomed any improvement. “I don’t think that will ever happen. But they have been making some move to change their internal processes.” Meanwhile, the delay in payments has severely harmed small business and the province’s reputation. Bloom said small companies are going out of business while waiting on payments while international companies are avoiding working in the province. Global medical supplier Siemens, said Bloom, is not servicing anything in Gauteng. “You don’t want a Gauteng health contract,” he said.

The health department came under fire last week after The Star repeatedly printed front-page stories on conditions Chris Hani Baragwanath Academic Hospital in Johannesburg. A shortage of staff in the hospital’s maternity ward had resulted in unnecessary deaths and disabilities, reported the newspaper. There have also been widespread reports the province’s clinics and hospitals have been hampered by lack of medication, insufficient or wrongly ordered equipment, and machinery that is un-serviced and unusable.

In a meeting with Mekgwe last week, the TAC was told the province has 80% of drugs in stock and 20% unavailable. Mekgwe explained that some drugs may not be available and negligence at depots has led to stores of expired medication.

If the department can sort out its finances, which will require a complete overhaul of administrative systems and the right personnel, it has the opportunity to improve quality of health services while increasing access. But history’s not on its side. If the situation continues or deteriorates, Gauteng could face a major service delivery crisis. Health service providers have resisted withdrawing services despite not being paid, but their patience and willingness to do business with the province will only last so long. If Mekgwe can’t sort out her accounts payable ledger, companies will avoid doing business with the province, and resort to suing and attacking Premier Nomvula Mokonyane’s office furniture, as was the case recently after the province failed to pay up after a court ruling.

The provincial health department’s financial woes are even more worrying when read alongside a national government health priority for 2012 – the national health insurance. The government hopes that NHI can be phased in over the coming years and it’s an obvious goal of the ANC, with significant spending allocated in 2012 despite discussions remaining at green paper level. But for NHI to have any chance of working, the state will need more doctors, better infrastructure and management capable of running a significantly larger public health system. Efforts are underway to improve each area, but right now, Gauteng’s struggling, just to pay its bills. DM

Photo: The Gauteng health department must take action in order to prevent institutions such as the National Health Laboratory Services from closing down. Greg Nicolson/DAILY MAVERICK.