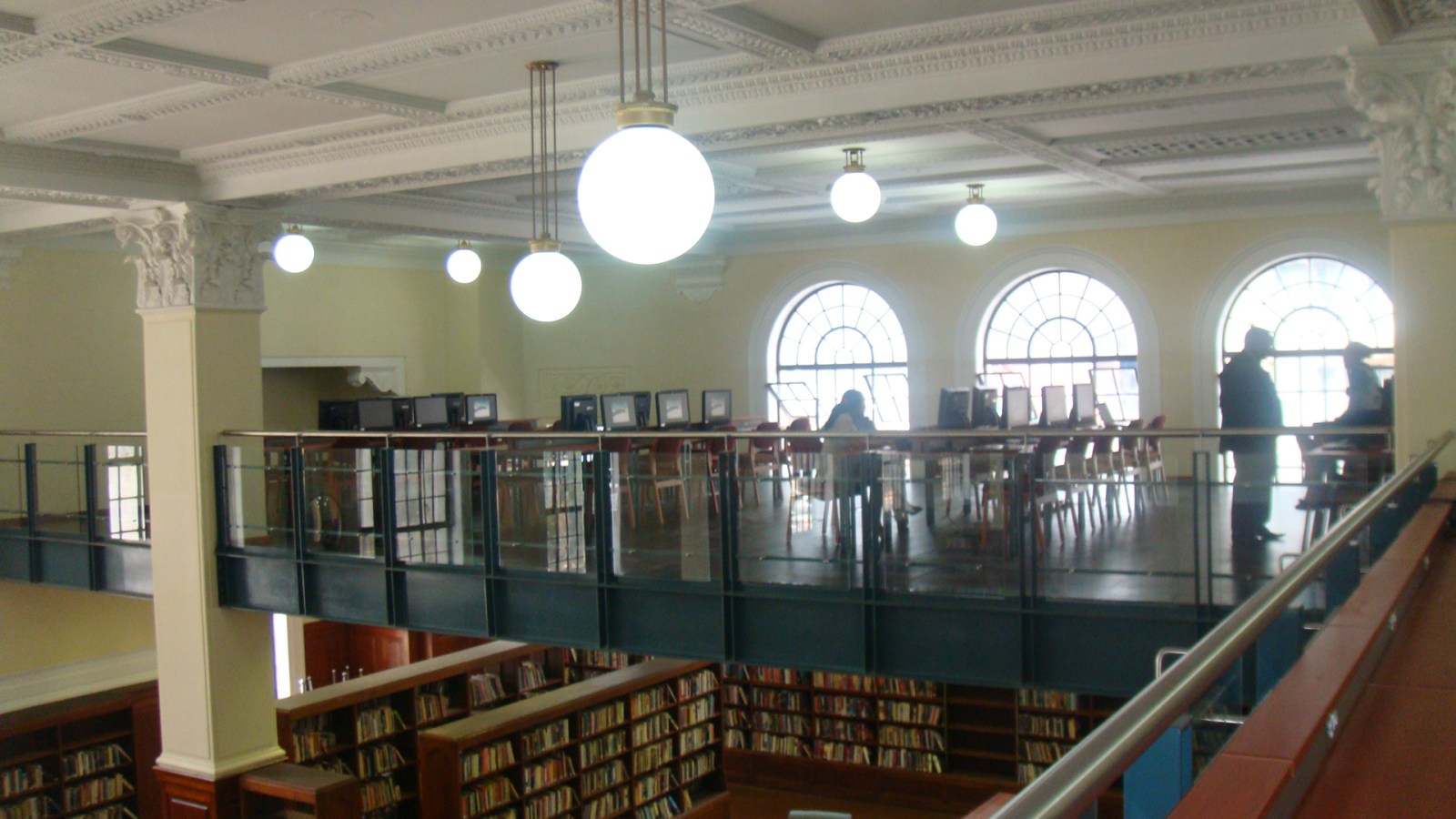 The Johannesburg City Library was closed in April 2009 for a much-needed facelift. Some three years and R68-million later, the library reopened on Tuesday transformed physically and functionally. This is a library that accounts for a new experience in public libraries in South Africa. By KHADIJA PATEL.

One test of a democracy, they say, is whether it grants equal access to the tools that make knowledge possible. The Freedom Charter certainly understood the significance of access to knowledge – and information – to a democracy. “All the cultural treasures of mankind shall be open to all, by free exchange of books, ideas and contact with other lands,” the Charter says. The reality of the South African democracy, as we well know, often falls far short of the vaunted ideals of the Freedom Charter. Ours, the statistics tell us, is one of the most unequal societies in the world. The statistics of course don’t lie. And it is perhaps in the staggering disparity in our access to “the tools that make knowledge possible”, to information, that has starved far too many South Africans of democracy.

The Internet certainly has democratised information, but only 6.8-million South Africans can access it. And before we get to the Internet, the shockingly low levels of literacy further stymie access to these tools. There is a clamour to recognise Internet access as a human right, but it falls then, not to the abstract world of binary systems, but rather bricks and mortar structures, like public libraries to help ensure equity in the distribution of services.

The emphasis on public libraries as a means to democratise information is certainly not new. Since the late 19th century, public libraries have been at the centre of the process to redistribute knowledge and information to the educationally underprivileged and this is no more apparent than in the history of the Johannesburg library.

The beautiful, Italianate structure calmly sitting across the road from the ANC’s Luthuli House owes its foundation to two earlier structures. In 1893, in an effort to lure the young men about town away from the city’s canteens, a library was opened in a corrugated-iron structure known as the Old Church Building. Five years later, a new structure on Kerk Street was built for the library, but as the library grew, so too did discontent with the lack of access it afforded to the under-privileged. As was common at the time, the library was a subscription library, only those who could afford to pay membership fees could enjoy its books. Demand for the library to be transferred to the Town Council increased and it was at a rowdy meeting in 1923 that the library’s subscribers finally relented to allow the library to become the country’s first major free lending library.

The library moved into its existing structure in August 1935, but it still would not escape scrutiny of its accessibility. In 1974 the Johannesburg library became the first public library to open its doors to all races. More than 30 years later, the role of the library as a public repository of knowledge would again be questioned.

We are witnessing the transformation from an industrial society, to what is often (if inaccurately) described as an “information society”, forcing a re-assessment of how well institutions like public libraries now serve their communities. If libraries are indeed crucial to our right to know then public libraries like the Johannesburg one have been forced to evolve to facilitate these social changes.

Located on the western edge of Beyers Naude Square, the library was first earmarked for improvement in 2005/6 when the Carnegie Corporation of New York approved the business proposal of the library and information services and agreed to a conditional grant of $2-million. Atilla Lourens, deputy director of the library and information services, says the upgrade aimed to turn the library into a “centre of excellence”. And as the pungent scent of new furniture and old books wafted through the library air on Tuesday there is little doubt the Carnegie Corporation has assisted in creating a veritable centre of excellence in the centre of Johannesburg.

Even to the uninitiated, the architectural improvements to the library are a feast. Without impinging on the roots of the Italianate architecture, the renovation successfully marries the stateliness of the original building with modern design. It has come at quite a hefty price though. In addition to the Carnegie Corporation’s contribution, the city spent a further R55-million on the project.

Central to the library’s upgrade was the creation of an IT hub Lourens believes was one of the greatest challenges in the renovation. It is crucial for any modern public library to meet the public’s needs, establishing a digital infrastructure while at the same time ensuring a seamless interaction between traditional and digital services.

Away from 19th century tomes on mining and a coveted Kelmscott Chaucer, three new floors rise through the centre of the original building bringing the library into this information age.  A number of public-access PCs have been added to the library in this first phase of the project and by the time the project is complete the library will boast an impressive 212 workstations.

Crucially, with improvements to the form of the library, its functions have been expanded. It is now a learning space, a meeting space and with the re-instatement of the theatre, it is also a performance space.  “The public comes first,” Lourens insists. “This library will see many different people frequent it and the staff will have to get used to it.” The addition of a coffee shop, set to open in the coming months points to a new direction in the library experience. With this expansion to its services and the gradual development of new forms of learning within the physical space of the library, Johannesburg library attests to the changing character of public libraries. Yet as the city’s main library celebrated a rebirth, rumours abounded of the imminent closure of the Parkhurst library, a direct cost, it was inferred, of the swanky library in the city centre. Parkhurst councillor Tim Truluck said he was told the library was to be closed because there was not enough staff for the revamped Johannesburg library and staff had to be reshuffled between various libraries.

The city of Johannesburg’s portfolio head of community development, Chris Vondo, however, vehemently denied the Parkhurst library faced closure. “We have no intention of closing any library in this city, he says. That would be an indictment on the commitment we are making towards education in this country. It would be an indictment against the communities we serve.  Those people who are saying it was going to be closed have other issues which you may not be aware of,” he said hinting that political subterfuge may have given rise to the reports.

The city’s director of library and information services, Nobuntu Mpendulo explained that a misunderstanding may have arisen after library staff from across the city were called to the central library. “Staff from libraries across Jo’burg were called in to help with final preparations leading up to the official opening of the revamped central library and this is where the misunderstanding may have arisen. It was a necessary step as the unpacking and shelving of books required skilled personnel,” he said.

Vondo reaffirmed the city’s commitment to all its libraries, but sought to emphasise the continued disparity in the access to libraries across the city. “We are concerned with all 80 libraries in the city of Johannesburg, but there are still deprived communities in this city.” He lists Orange Farm, Ivory Park, Alexandra and Diepsloot as areas that suffer from little or no access to a public library.

It will no doubt be argued that the money spent to install a skylight, or new furniture in the library could have been better spent on fixing the city’s billing crisis, for example. Fixing our libraries certainly does not remedy the more glaring ills in the city, but it does not nullify the need for us to entrench our democracy to ensure equal access to the tools that make knowledge possible.  DM