An epic tale: Zambia down Cote D'Ivoire in Afcon final

An epic tale: Zambia down Cote D’Ivoire in Afcon final 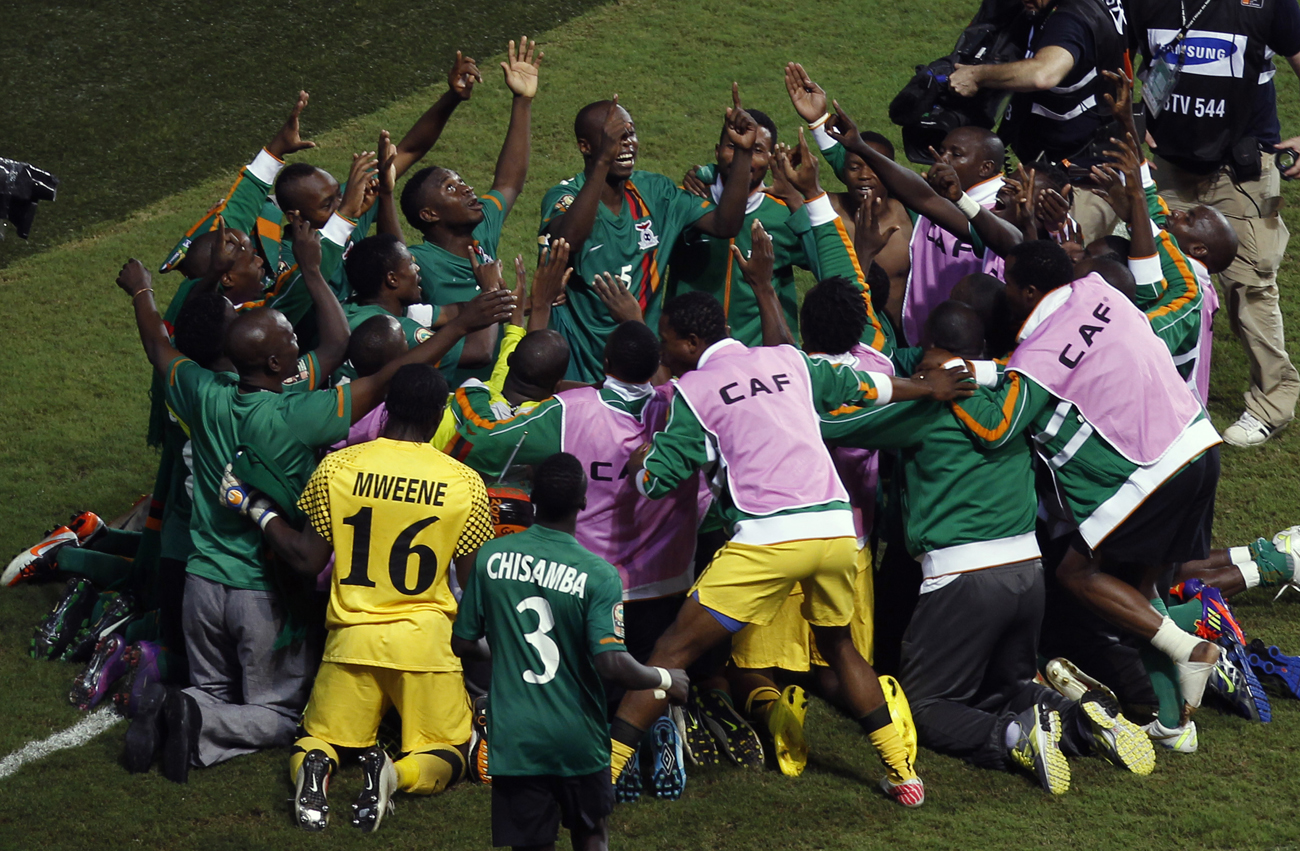 Amid all the epic story-telling, you’d be forgiven for not noticing that a real football match took place last night. On the pitch, Zambia beat Cote D’Ivoire in a penalty shootout after a tense but exciting match to win the African Cup of Nations for the very first time. Off the pitch, a rather more epic narrative was being spun, involving a classic David vs. Goliath tale, post-conflict reconciliation and the exorcising of at least 18 demons. By SIMON ALLISON.

Football is a lot like reality TV. There are eliminations. There’s a cast of dull, insipid characters who struggle to string more than a few coherent sentences together. There’s that silly post-event interview where everyone says the same thing (“I’ve always dreamed of winning Idols/America’s Next Top Model/the World Cup”). There’s a panel of judges convened to judge the performances, although Gary Bailey is considerably gentler than Simon Cowell.

And then there are the storylines. Producers in sport, like in reality TV, know that much of football’s wider appeal lies in the narrative that must be spun, the tale that must be told, in the emotional resonance which raises a mere football match – 22 silly men kicking a round thing back and forth – into something altogether more grand: an epic, gladiatorial struggle to bury one’s demons and assert a bright, brave new future.

This point brings us nicely to Sunday’s African Cup of Nations final. Prior to the match, I read scores of previews, none of which told me very much about the football itself. Instead, the focus was heavily on the teams’ compelling storylines, both of which – if there was any justice in destiny – deserved to end in victory.

Let’s take the pre-match favourites first. The Elephants of Cote D’Ivoire represent a golden generation of African football; a rare conglomeration of African talent that play in the world’s top clubs and have won all Europe’s major trophies. Just look at the team sheet. You know these names. Chelsea’s veteran striker Didier Drogba, of course, and the immensely talented Toure brothers of Manchester City, Yaya and Kolo. Gervinho, Arsenal’s new superstar fresh from leading Lille to the French title last year, and Didier Zakora, who’s been floating around the Premier League for years. Then there’s Salomon Kalou, also of Chelsea, and the new man, Cheik Tiote, the midfield fulcrum of a Newcastle team which lost miserably in his absence over the weekend. This assembled star power should be too much for anyone to take on. But there is one trophy eluding this golden generation – the African Cup of Nations, of course. And while they’ll all get to do it again next year in South Africa (even Drogba should still be around then), it’s much more enticing to cast this as their last roll of the dice; it was win or bust for the Elephants, their last chance to cement their European pedigree with an African triumph.

Throw into this already potent mix the trials and tribulations that Cote D’Ivoire has gone through over the last year, and the final suddenly became less about football and more about reconciliation. Remember the Springboks winning the 1995 Rugby World Cup? And then Bafana Bafana taking the African Cup of Nations the next year? These were pivotal events in our nation-building project. They were the shared experiences which brought our country together. Cote D’Ivoire, after a political crisis, civil war and refugee explosion needed a sporting triumph to bring it together. Because sport can heal the most bitter of divisions, or so we like to believe. And Drogba, lest we forget, just happens to be on his country’s truth and reconciliation commission.

It’s hard to argue with a narrative as compelling as that. It’s got everything: personal struggles, a team needing to prove itself and the expectant weight of a nation on the players’ shoulders. Football aside, that’s a story that deserves to win a trophy. But that’s only because you haven’t heard the tragic tale that is weaved around their opposition on the night, Zambia.

Let’s get one thing out of the way first. Zambia should not be in these finals. Their progress this far goes against the grain of footballing logic. Their team, with one exception, plays all its football on the African continent. Zambia’s players aren’t even good enough to play in Europe, runs the sub-text of this oft-repeated observation. That might be true, but somehow they were good enough to beat two of the really, really big boys of African football to get to Sunday night’s final: Senegal in the group stages and Ghana in the semis. They are the ultimate underdogs; a team of no-namers taking on the stars, and winning. It already sounds like the beginning of a Hollywood script.

But it gets better. The final of this year’s competition was played in Gabon’s capital Libreville, in the rather utilitarian Stade De l’Amitie. Which is exactly where the final would have been played if it had been scripted. For only half a mile off Libreville’s coast is the spot where Zambia’s entire national team – 18 players – perished in a plane crash in 1993. They were off to play a World Cup qualifying match in Senegal, and were a team of rare promise, but they never made it. This tragedy is a scar on Zambia’s national psyche, and even before this year’s tournament had started, there was a palpable feeling that this was the perfect opportunity to put this behind them. You’d know all this if you watched the match on Sunday night, because the commentators couldn’t seem to stop repeating the story.

Zambia also had an expectant country behind them. Their success has become almost symbolic of a new era in Zambian politics. Michael Sata, a long-time thorn in the government’s side, was elected as president late last year, and his rule is – so far – proving refreshing. There’s an air of hope and optimism around Lusaka, a feeling that there might be a Zambian renaissance in the offing. The success of the Copper Bullets, as the Zambian team is known, seems to symbolise this new broom that’s sweeping away the dirty past.

So how do we choose between these two stories? Who is more deserving: the veteran superstars trying to heal their wounded country in a last bid for glory, or the young underdogs looking to exorcise the demons of a tragedy, watched from above by the ghosts of those that perished?

Fortunately, in the midst of all this story-telling, a football game broke out to try and answer this question for us. But even the beautiful game couldn’t separate the two teams, who poked and prodded each other for two full hours of play (extra time included) without either finding a way through. It was an entertaining match, but no classic, and seemed to gravitate inevitably towards a predictable denouement, a finish of which any reality TV producer could be proud: a penalty shootout, perhaps the ultimate example of manufactured suspense, and the perfect ending for this battle of the compelling narratives.

In the end, Zambia’s myths were stronger. The emotional tug of the 1993 air disaster was simply irresistible, dragging the Copper Bullets to their first ever African Cup of Nations victory. The commentators and analysts did their best to give some credit to the players themselves, but they were at best supporting characters in this narrative. As even the normally rational Bailey observed afterwards, perhaps Zambia’s victory was “written”, and Cote D’Ivoire never stood a chance. It was fate, in other words.

But that thought was unlikely to have consoled the desolate Cote D’Ivoire team last night, especially Drogba, whose dreadful penalty miss in normal time will haunt him for years. The players on both sides knew that once they stepped onto that football pitch, all this baggage became irrelevant, and they were just 22 silly men kicking a round thing back and forth. On a hot Sunday evening in Libreville. Zambia kicked it ever so slightly better, and that’s all there is to this particular story. DM

Photo: Zambia celebrate after their win over Cote D’Ivoire. REUTERS.