The love shines through the darkness of Fugard's Statem...

The love shines through the darkness of Fugard’s Statements 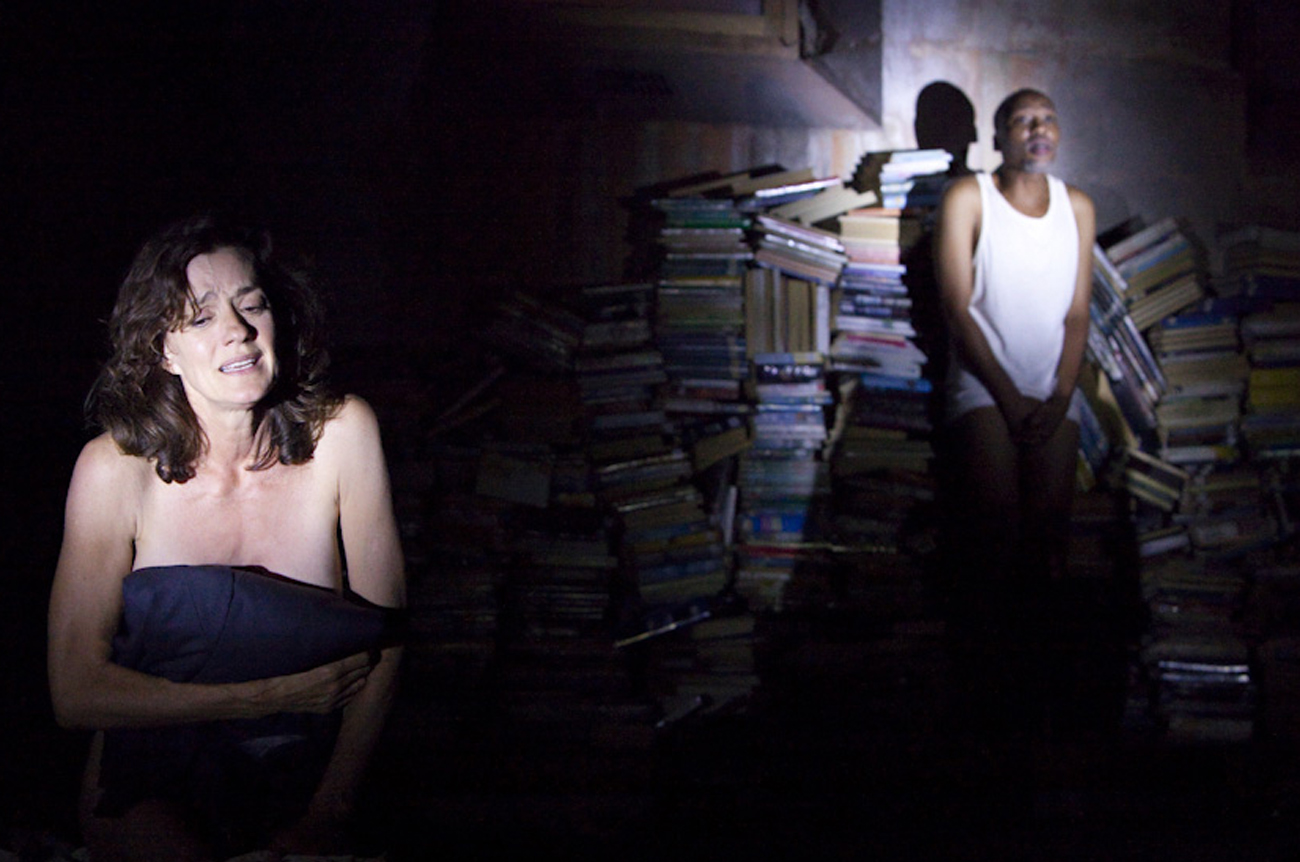 Statements After an Arrest under the Immorality Act opened at the Fugard Theatre on 24 January; the play, written 40 years ago, is back on stage for the first time since Fugard himself last played it, in the early seventies. And a beautiful return it is. By Emilie Gambade.

There is no curtain to hide behind, no darkness to dive into; there are naked bodies lying on the floor and a man smoking behind, the face of conscience watching from above; and the sound of love, whispering from deep down.

She is a white, mature, tall woman. He is a black, younger, shorter man. They are everything that dark conventions despise. She is too white, he is too black; she is too old, he is still young; she is single, he is married; she is too tall, he is shorter. But love is blind and what lies beneath is more important than the outer coat. Unless the country you live in creates enough laws and boundaries to ensure that no mater how romantic or deeply meaningful – and different – the essence is, it’s the box you are in that matters.

Kim Kerfoot, who graduated top of his class from the University of Cape Town in 2007 and worked for ZANews among many other, directs Bo Petersen (a white woman), Jeroen Kranenburg (a policeman) and Malefane Mosuhli (a coloured man) with a mania for life that turns the stage into a burning platform of love, guilt, escape and shame. With a generosity of spirit tinted of wisdom, he leads three great actors to a world where there is nothing to hide and everything to be hidden.

Mosuhli is troubling, a charming yet brittle chameleon moving slowly from a wise, confident man into a hunted down animal, bending under the weight of morality and convention.

Petersen opposes him with all her love and reticence of someone who can’t let go and finally realises there is nothing left to lose when everything is gone.

Both actors in their crude nudity oscillate from desirable sensuality to vulnerability, a man and a woman in their wholeness, tightrope walkers in a library hall; what does it take to make them fall?

Apartheid, Damocles’ sword hanging over their heads, magnified – if this can be – by Kranenburg, the accomplished actor who plays the role of Detective Sergeant Du Preez. Bluntly stating immoral facts, he encompasses disgust wrapped up in conformism. Hiding behind a cigarette glued on his face and a wooden stand, he modulates his voice, enumerating forbidden life and love with both professionalism and perversion. Welcome to apartheid.

The intimate stage of the Fugard is the perfect case (box) for the play: the stone walls, school-like chairs and pale lights easily turn the room into a library. With simplicity and talent, Guy de Lancey added piles of books falling on the floor, an allegory of the couple’s love story; filled with passion, words, poetry and hope, soon dark pages eaten by mice, if not consumed by the readers’ eyes.

The play is in movement, pacing through emotions, heart beating like a stroboscope, wild animal trying to adapt to the environment as fast as it can. Kim Kerfoot explains, “this play (…) is a living organism carrying within it a set of codes locked in its DNA that are able to form life whenever circumstances are favourable, as well as ‘stores of potential energy that combust on contact with an actor and an audience’ (Steve Waters, British playwright).”

Athol Fugard once said, “Love is the only energy I’ve ever used as a writer. I’ve never written out of anger, although anger has informed love.”

What does it take to make us fall? Exclusion. Being pointed out. Singularised. Athol Fugard’s play is not only a love story under apartheid times, but also a mirror placed in front of our deepest fears; what would I be if you exclude me?

Statements after an Arrest under the Immorality Act has the energy of love and the steadiness of morality; it has the speed and ferocity of passion and the slowness of perversion; the contrast in rhythm, emotions, perceptions of life, differences is written black and white on the big board of life and scratched in red with our society’s morals. DM

Athol Fugard’s Statements After an Arrest under the Immorality Act runs at the Fugard Studio from 24 January to 18 February 2012. Tickets – from R100 to R140 – are available through Computicket and the Fugard Theatre box office on 021 461 4554.