Riaad Moosa and his bright Material 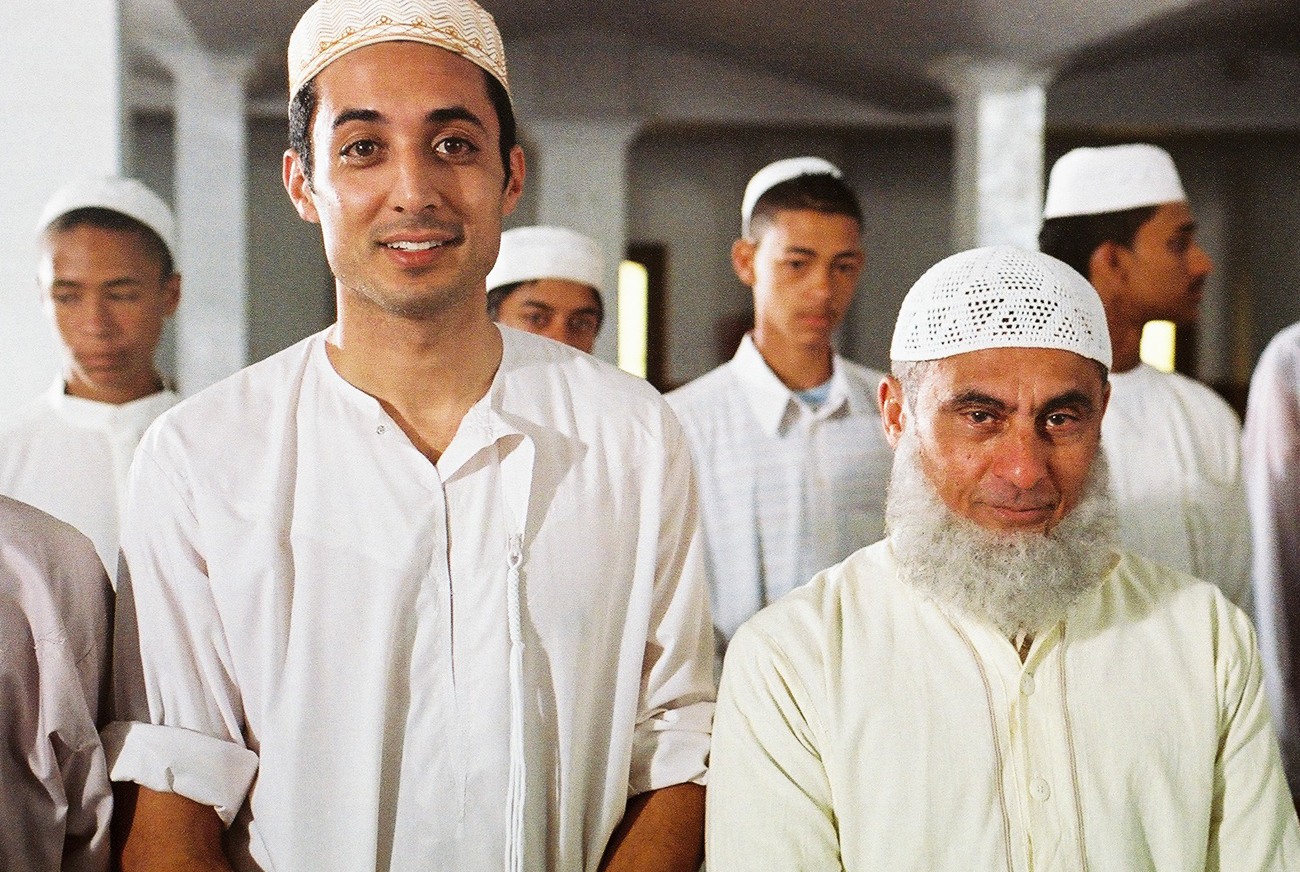 As Ronnie Apteker's latest movie, Material, is about to enter the circuit, the reviews are glowing with praise. KHADIJA PATEL talks to the man in the centre of the action, Riaad Moosa.

I find Riaad Moosa on a Sandton sidewalk, impatiently waiting for a download to complete on his iPhone. He’s also looking for a lift. I dutifully oblige. We weave our way through the lunchtime traffic, making our way to the offices of United International Pictures (UIP), chatting amiably about theatre, a chance meeting I had with his sister and the other. His film Material had premiered in Johannesburg the previous night and I was eager to find out if he had overcome an anxiety that the film would earn him a fatwa. “I’ve still got major anticipatory anxiety,” he tells me.

At the offices of UIP, we sit down to an interview. I’ve already watched the film and tried my best to assure Moosa that he had not done anything to enrage the crazies. At least not this time. I do understand his fear though. It’s not altogether a reservation about the film’s content, but rather a nagging worry about the tropes of artistic expression.

I assure him again, he has nothing to worry about. It’s a beautifully made film in which Moosa plays Cassim Kaif, a young Muslim man who works in his father’s fabric shop in Fordsburg, Johannesburg. As tradition dictates in this part of the world, Cassim is groomed to take over the family business from his father. As a dutiful son, he has not considered any alternatives. The shop is his life and his destiny. Until one night, through a series of coincidences, he lands up doing an open mike session at a local comedy club. He discovers a hidden talent for comedy and is encouraged to continue further along the comedy path forcing him into conflict – not only with his father but also other family members and some elements of his community.

Watch the trailer for Material:

The film lends historical significance through its storyline of conflict between Riaad Moosa’s father in the film, played by Vincent Ebrahim, and his brother. Their conflict was founded when shopkeepers from Fietas – one of the oldest communities in Johannesburg, and one of the first ‘locations’, or multi-racial areas established under the government of Paul Kruger in 1893 – were forcibly removed by the Group Areas Act. Until then, Fietas was an integrated community, not unlike District Six and Sophiatown. Many of the shopkeepers who lost their livelihoods in the move from Fietas to Lenasia, ended up at the Oriental Plaza, the shopping complex in the heart of Fordsburg, now famous for bargains, samoosas and a plurality of fabric stores. And the story of the film goes, Vincent Ebrahim’s character was affronted by the readiness of other shopkeepers to sell out to the apartheid government and go meekly to the Plaza. His brother however has no such qualms. And it is this richness in the story telling, the attention to historical detail that sets this film aside from other efforts to represent the Fordsburg community in all its beguiling eccentricity.

The film bills itself as a story of a family grappling with universal issues like, identity, responsibility and duty, and Moosa feels the film has lessons for his current predicament as well. “Material,” he says, “shows up the conflict of duty – the expectations of family and community versus the yearning to do something different. This is something you deal with.” He continues as I nod along in agreement, “How do you express yourself in an artistic way, in a creative way – in my case with humour but at the same time wanting to be an integral part of your community and wanting to be embraced and accepted?” He points out that some people don’t feel this obligation to please the hearth and home. “Some guys don’t have an issue with that. They say, ‘Forget it, I’m going to say what I want to say’.”

It’s regrettable that a film about a South African Muslim family fails even to win over the star’s reservations of artistic licence and creativity within the Muslim community. This is not a film about the backwardness of Muslims. It does not portray Muslims in an unforgiving light. Instead, it shows an aspect of Muslim life in South Africa rarely seen before. Away from the bombs of Baghdad and the schizophrenia of Pakistan, this is Johannesburg, South Africa, and this film reminds us that though Muslims are easily wound up into fits of self-righteousness, they are human too. They share the same physical space as other South Africans. They share the same experiences.

In the car earlier, Moosa spoke to me about a comment from Cape Town-based journalist Yazeed Kamaldien. “Yazeed makes a good point,” he says, “This is the first time you hear the adhaan in a movie – the call to prayer that sounds from mosques five times a day, inviting the faithful to salvation while irritating their neighbours, and then actually see people praying afterward. Usually in a film, you hear the adhaan and then you hear a bomb going off or George Clooney’s fingers being hacked off.”

The film effectively challenges perceptions of the Muslim community’s ‘otherness’.  “I really think this is a positive thing,” Moosa says. “It moves away from the general narrative about Muslims.” He then adds, “You know there’s a specific narrative out there involving Muslims – terrorism, war, misogyny…” He trails off and then looks at the poster of Material on the wall opposite him and continues, “Here, this is just a human story, a family story that everyone should be able to relate to. The only difference here is that the protagonists – the leads – are Muslims.”

Just that morning, Megan Godsell, a writer, director and filmmaker in her own stead was gushing with praise for Material. “It was subtle and gentle and funny as well as heartbreaking!” she enthused. “Everyone must see it!” She rates Material alongside Paljas, God is African, Tsotsi and White Wedding – films she calls real South African films. “It’s an interesting thing,” Moosa says weighing the feedback he’s received so far, “I think non-Muslims are going to like this movie more than Muslims.”

He’s experienced some weird reactions to the film so far. Putting on his best impression of a Sandton kugel, he says, “I just realised Muslims are people like everyone else. I identified.” While we enjoy a chuckle he says, “It’s not just anyone saying these things – intelligent people are saying these things. It is strange but it’s the thing with these themes that are pervasive and you get bombarded by one kind of image and then you are confronted with something that is just a lot more real. In that sense you can understand this reaction, but it’s just still so strange,” he says while his face creases into a thoughtful furrow.

This film has been more than seven years in the making but the hard work and thought put into it has paid off in a beautifully made peace of art. Moosa though is certain there will not be repeat performance for him. “I’m more comfortable moving behind the scenes. I think I have a feel for it but I do like performing,” he says. “ I like writing jokes and performing for the first time. That is my bliss.”  And it is his love for performing that gave birth to the film. He recounts, (the film’s producer) Ronnie Apteker came up to him, and said “Riaad,” Moosa now puts on his best impression of Ronnie and then continues, “‘We should do a movie. We should write a script.’ I thought, ‘What is this guy saying? I have ward rounds in the morning.’” The idea though took root. “I approached it like I do to a lot of things in life. If I don’t have an initial moral opposition to something directly then I just go with it and see where the universe takes me. And this went through some strange process where at various points along these seven years we thought we were flogging a dead horse. Nothing’s going to happen and then you have a moment of clarity – an epiphany to spur you on.”

The title of the film, he says, was one of those moments. “At that point the film was set in a bicycle shop – that was the inspiration of the original story about two brothers who become estranged that Craig heard from some shopkeeper while he was doing his research – and the one went to the Plaza and the other didn’t. The one at the Plaza flourished and the other one’s business went down.  It was a bicycle shop. And then chatting to (writer and director) Craig Freimond one day, he asked me what question I’m most often asked as a comedian. I told him I’m always asked, ‘Where do you get your material from?’ And I usually respond, ‘The Oriental Plaza’. Craig took a beat and he said, ‘Why don’t we name the movie that?’ Joey Rasdien and I looked at each other, high fived and we were all happy. It sounded good and then upon further reflection, it just opened up so much – the textures, the beauty, the colours – the potential for that. As well as the conflict – it’s the theme of the movie in one word.”

“It’s moments like those that have made the film. And towards the end of the journey the script wasn’t right. And then we had the opportunity to get Vincent involved. Craig went to see him in London – he was doing an eight hour play on Afghanistan – that’s the kind of actor this man is – and Vincent said to Craig”, and Riaad now drops his voice into an audible whisper, “‘I need the character of Ebrahim to be a bit more developed. So I’m going to take ownership of the character…’” Riaad continues, “Craig worked with Vincent, they worked on some improvisations. Vincent got a feel for the role and then Craig travelled back home but the script now had a better-developed character for Ebrahim. And that process resulted in the script coming together. All the pieces came together. Eventually the film evolved into a story about this man. At the beginning of the film you’re not sure what it’s about. If Vincent didn’t come aboard we probably would not have shot this film.”