We had a Mining Indaba and what did we learn?

We had a Mining Indaba and what did we learn? 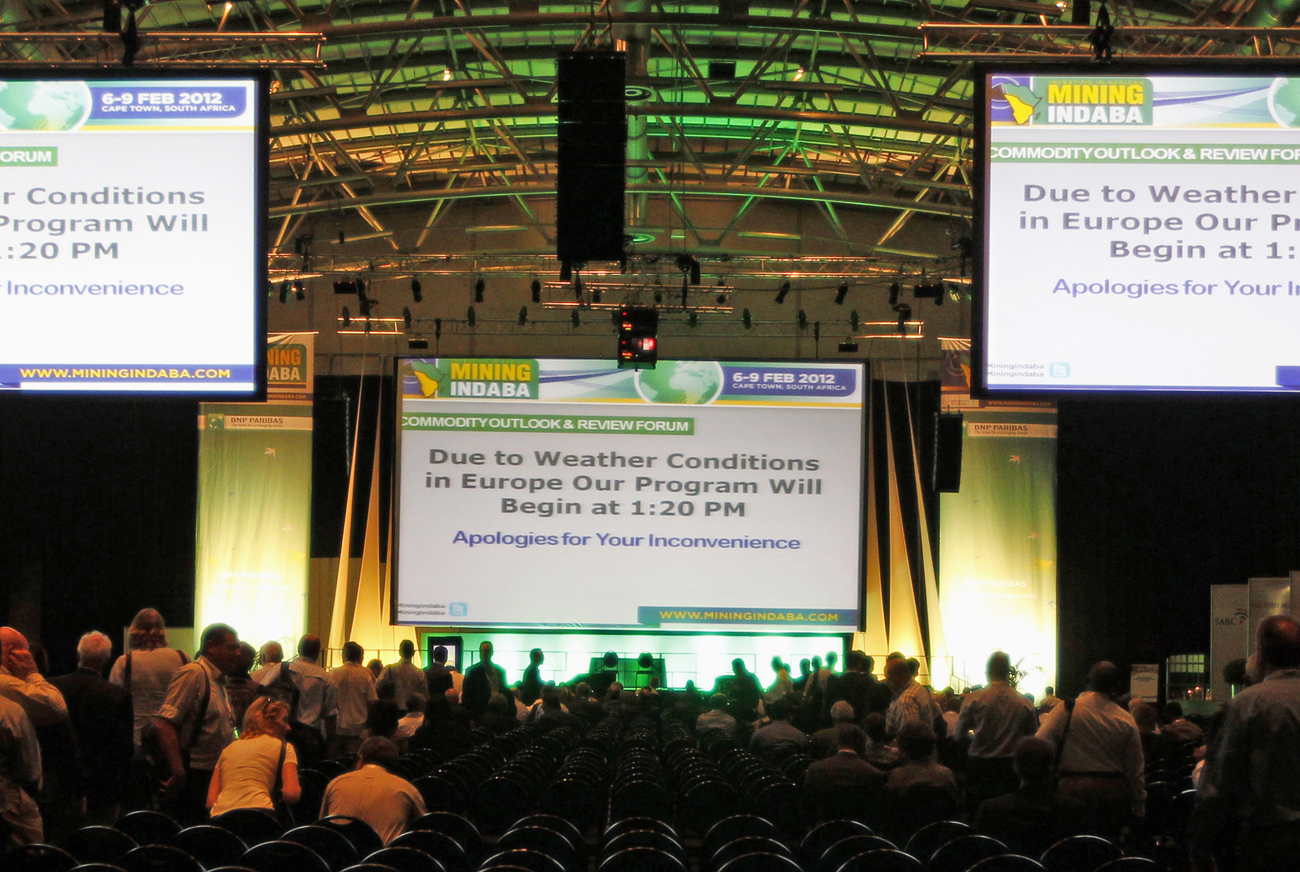 The 2012 edition of the Cape Town Mining Indaba is winding down. With 7,200 delegates, the majority sporting Australian accents, we learnt that no matter the political situation on the ground, the entire industry wants you to come and dig. Just bring a shovel. And a cheque book. By RICHARD POPLAK.

What the protesters lack in numbers, they make up for with graphic placards. Mashed babies, burnt corpses and lines like, “Kabila is a killer and a rapist”. This is not what you want to see directly following the Democratic Republic of the Congo’s annual mining indaba breakfast, in which a contingent from that troubled country insisted that, hey, the joint is Club Med for diggers with fortitude.

In an all-out effort to disprove any tangential links between politics and real life, the DRC breakfast – very well attended – made a case for the country as a resource destination. That it sits on one of the richest asset bases in the world is hardly a secret; that those assets are almost impossible to reach is also well known. The fact that infrastructure in the country is on the ris – the Chinese hope to have completed a highway from Kinshasa to Lubumbashi by 2018 – still doesn’t detract from the fact that there is no sitting government, no president and no real hope of one in the near future.

And so, one walks out into the magnificence of Cape Town, belly full of decent cheese and succulent fruit, only to encounter the other side of Indaba, the reality side. The DRC’s fractious politics were only mentioned in passing, as a sort of inconvenience that most folks know should not be spoken about in polite company. The placards and pickets are a rude awakening. The Indaba is more spin than reality and everything needs to be imbibed with a grain of potash.

Take, for instance, the buzz about the coming Gencore/Xstrata merger. This is, arguably, the biggest mining deal in a generation. But it is also by no means a sure thing. Major shareholders are starting to baulk, figuring that the $90-billion ‘merger’ – an overused word these days, meant as a sort of euphemism for ‘takeover’ – works in Xstrata CE Mick Davis’s favour, but not in theirs. The deal undervalues the stock, and overvalues the outcome of a ‘merger’, even if it does lead to a purchase of Anglo American down the line. In short, even the major storyline at Indaba is not the fairytale many insist it is. There’s a troll at the bridge and he’s an ornery fellow.

Next up: Nationalisation! The debate that just won’t go away, even though it’s not really a debate. Most of Africa shakes its head when South Africans go on about this: the Zambian mining minister displayed a graph that saw mining revenues in that country plummet after the 1970s. “That,” he said of his slide, “is our nationalisation debate. We know how it turns out.” The room laughed.

No one was laughing during South African mining minister Susan Shabangu’s keynote address, least of all the ANCYL. “In the midst of this debate about nationalisation, we have consistently maintained that nationalisation is not the policy of the ANC or the government. When all is said and done, the ANC will adopt a policy position on this issue that is in the best interests of South Africa,” she said.

“Were it not for the mining industry lagging behind in terms of implementing the provisions of the Mining Charter, the Mineral Petroleum and Resources Development Act and fronting among others, this debate would not have been there in the first place.” Which is actually bang on, except for the fact that Shabangu leaves the government’s own special instances of intransigence out of the picture. Were the industry and the government working in consort, rather than at cross-purposes, beneficiation would be less of a buzz word, and more the fabric of our mining policy.

Which brings us to climate change. Except for one keynote address, very little was mentioned about the single factor most likely to affect the industry over the course of this century. The Alternative Mining Indaba, which takes place alongside the main event, is big on climate, but comes at it from the wrong place – we have to stop doing bad things to the planet or bad things are going to happen to us! Mining is an essential human activity – we eat, we screw, we dig – and it seems baffling that a trillion-dollar industry wouldn’t be placing more emphasis on the preservation of the status quo, i.e. life on Earth. Sure, there’s the usual lip service, but it seems as if it will take a good decade of completely unreliable weather before miners wake up to the very real challenges before them.

But nothing was quite as dispiriting as those DRC picketers. They were there to denounce the government they’d fled, berating it for its tyranny and stupidity. Meanwhile, that very same government was at Indaba to convince us that despite their tyranny and stupidity, they provide an excellent fiefdom in which to dig for baubles. That’s the game, folks. Hide your head in the sand, and while you’re there, poke around for gold. DM

Photo: Delegates await the start of the Investing in Africa Mining Indaba in Cape Town, February 6, 2012. Africa’s mining industry is in the spotlight at the annual meeting that brings together mine executives, investors and policy makers from around the continent and elsewhere. REUTERS/Mike Hutchings.