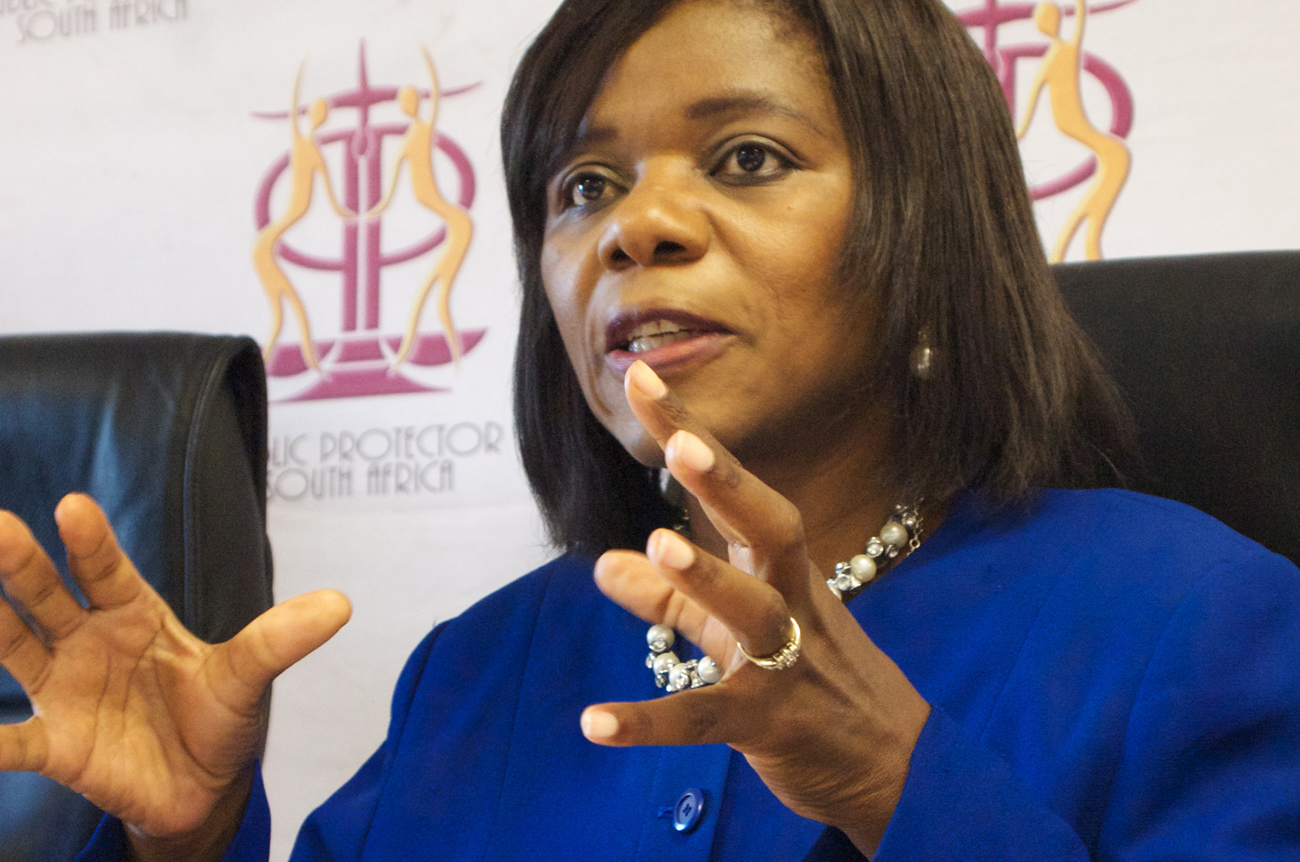 Mistakes and bad judgement calls happen. But as Judge Nkola Motata, Robert McBride, and Jackson Mthembu have shown us, it is what comes next that really counts. With more than enough enemies out to get her, Public Protector Thuli Madonsela has shown that, in the face of calamity, she can be a model of accountability. By MANDY DE WAAL.

So when her state vehicle was crashed by her son in contravention of the judges’ handbook, the first thing Madonsela did was to step up to the plate and take responsibility.

There are more than a few people who’d appreciate the opportunity to dance on Thuli Madonsela’s metaphorical grave. The year 2011 was a busy year for the public protector with shady lease deals that frequently involved a property magnate called Roux Shabangu.

Madonsela’s pronouncement on the matter led to former public works minister, Gwen Mahlangu-Nkabinde getting the chop. And, after being suspended with full pay and benefits for the past few months, erstwhile police chief Bheki Cele will learn his fate at a public inquiry into allegations against him. That happens just before Valentine’s Day, so remember to make a note in your diary.

Then there’s that lover of largesse, Sicelo Shiceka, who buzzed off after Madonsela’s report revealed he had developed a R13,000-a-night mosquito-fighting habit. The extravagant pest-control measures were chalked up when he was tired of being bitten by pesky parasites, and took to sojourning at Cape Town’s One and Only Hotel. That’s aside from the Swiss jaunt, flying first class, and trips for family and friends.

Those are the biggies, but Madonsela has made loads more enemies given her habit of cutting comrades’ tenure at the tender and personal expropriation trough short. Imagine the glee the public protector’s detractors must have felt when they turned on the radio on Thursday to hear breaking news of a story about a car crash that involved Madonsela and the unauthorised use of her state vehicle.

It turns out that Madonsela’s son, 23-year-old Wantu Madonsela, used her official BMW X6 during the early hours of Wednesday, 1 February, while the public protector was sleeping and without her permission. Thuli Madonsela wasn’t in the car at the time, and because of this, it constituted a violation in terms of the judge’s handbook. According to the handbook, Wantu would only be entitled to drive the vehicle with his mother’s permission, and if she was a passenger in the car.

Wantu told Eye Witness News that he had crashed into a wall after swerving to miss an animal that ran across the road. “I took my mother’s car and her private petrol card,” Wantu told EWN. “I bumped into one of my friends who needed a lift home. On my way back, I avoided a dog on the road, and swerved into a wall.” Wantu wasn’t seriously injured in the accident.

The reaction to the incident was swift, proactive and decisive. Madonsela’s VIP protection and security detail was told about the incident immediately, and a docket was opened at the Garsfontein police station shortly afterwards. The public protector issued a statement to the media via Sapa through her spokeswoman Kgalalelo Masibi, in which she said that the law must take its course.

“I will submit myself to internal processes regarding the use of state vehicles in line with my terms and conditions of my employment,” Madonsela said. “I have already made contact with the owners of the affected property and agreed to compensate them for the damage.”

Madonsela’s not the only public official that’s had a bit of car trouble. In December 2006, Robert McBride was driving home from a Christmas party when he rolled his state vehicle while drunk. Instead of taking the high road and coming clean, he staged a cover up with fellow metro officers. It is this action that shamed McBride and led to a charge of defeating the ends of justice, in addition to a drunk driving charge. McBride was convicted on both charges.

A year later, Judge Nkola Motata was on his way home from drinking wine with a friend when he crashed his Jaguar into the wall of a house in Johannesburg. Despite being a judge, Motata didn’t do the honourable thing. Instead Motata drunkenly appealed to bystanders to help him get off the hook: “All of you, let me tell you, my brothers and sisters – these people should not catch us. Let us live, we are the majority and this is our land. It is not the land of the boers, even if they have big bodies. South Africa is ours, we rule it,” he slurred.

What Motata said was discovered because a tape of the event was made by the owner of the house, Richard Baird. The recording was given to Mail & Guardian, which had it translated from seSotho into English. The tape reveals Motata later said: “I am caught by these boers, I do not care for them. I do not want to talk to them… They must not think they have caught me with something that will not happen.” He also swears at Baird frequently and says “don’t worry about whites, it is the truth that must prevail”.

The truth did indeed prevail, but not before fairly long court proceedings, which eventually saw Motata convicted of drunk driving. This was rapidly followed by an announcement by the Judicial Service Commission, which stated that it was going to establish a tribunal to investigate Motata’s gross misconduct. The effect of the judge’s behaviour is a loss of peer and community respect. The judge’s status is gone but the tribunal, if it ever happens, may well also see him losing his position and career.

Jackson Mthembu has also had his troubles with drinking and driving, but unlike Motata and McBride, handled it completely differently. The African National Congress spokesman was driving under the influence in Cape Town in March 2010 when he was arrested. He continued doing his job in a professional manner while in police custody, handling a matter regarding Julius Malema and granting comment to Sapa. Mthembu pleaded guilty, was fined and expressed the right kind of remorse: “I’m sorry for what I have done. I’m sorry for letting you down,” Mthembu said. It was a statement that won him sympathy, respect and forgiveness.

What Mthembu and Madonsela show is the power of accepting responsibility, and taking full accountability for one’s actions. Mthembu made a full recovery from his debacle because he told the truth, unlike Motata and McBride, who are paying a heavy price for their deceit and irresponsible actions. As they say, it is the cover up that’s so much worse than the original sin. We are all human, we all make mistakes, which is forgivable. It’s the lying about it, and conniving to cover that up, that’s not. DM Photo: Most politicians should take a leaf out of Public Protector Thuli Madonsela’s book and be honest about their actions. REUTERS.