Dr. Jekyll and Mr. de Villiers: the baby-faced captain with the ruthless streak 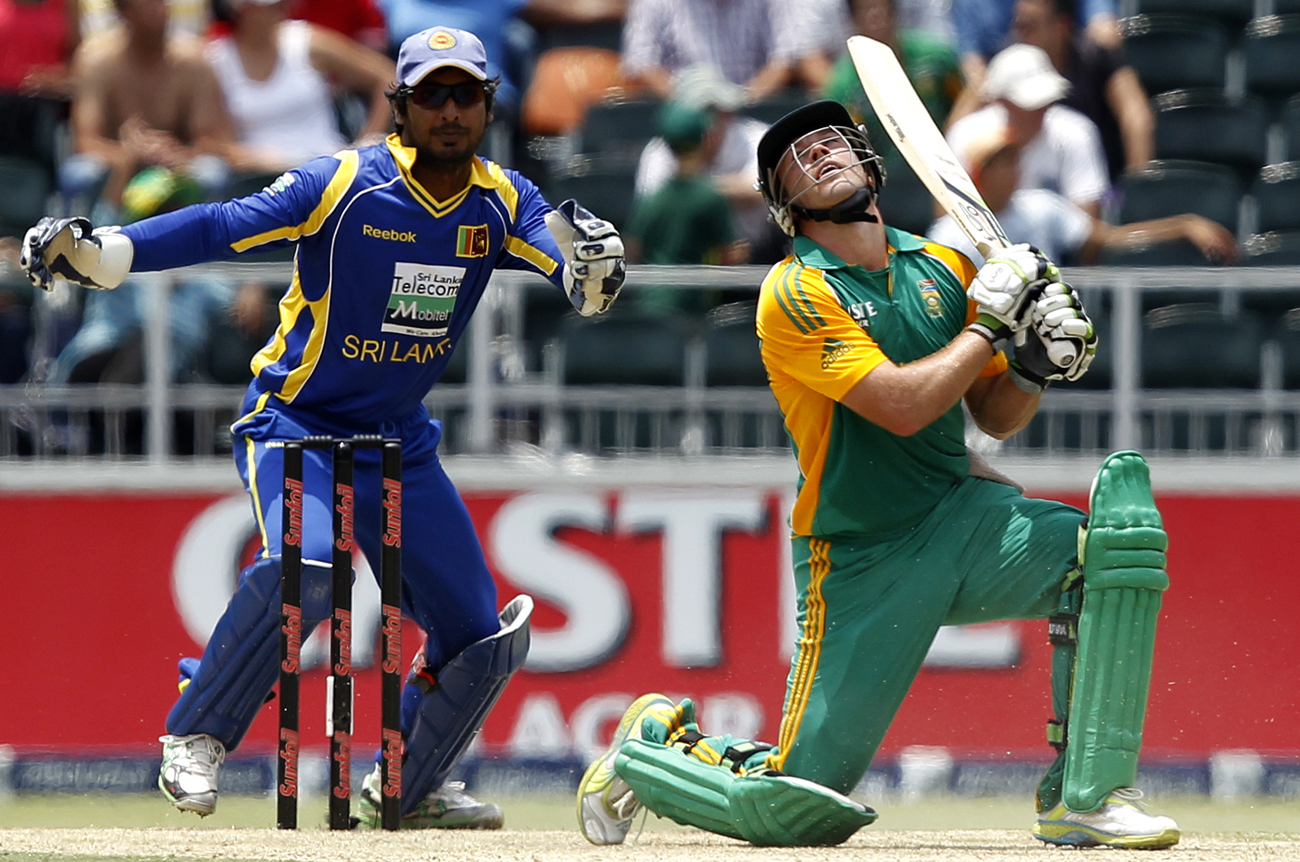 The recent ODI series against the Sri Lankans saw the Proteas win 3-2. It was also the debut of AB de Villiers’ captaincy. PAUL BERKOWITZ was pleasantly surprised by the flair and innovation that he’s brought to the captaincy.

A conversation I had years ago on the steps of UCT’s Jameson Hall sticks in my mind. Actually, it was more of a monologue, nay, a soliloquy, to which my brilliant friend was subjecting me. The topic of this one-way chat was the lack of imagination in the various South African sporting codes with particular emphasis on Saru and the Springboks.

“Paul” (he declaimed) “if Jonah Lomu was born a South African, those morons in coaching and administration would have stuck him in the scrum without a second thought. South African rugby only knows one way to play; breed them big, heavy and dumb, and try to physically crush the opposition.”

Fair assessment or mean-spirited rant, his words remain with me. The portrayal of South African sporting codes and teams as unimaginative, boring and staid is a familiar and comforting cliché. It’s also not consistently true – rugby has changed and changed back again, cycling through periods of creative brilliance and unattractive bloody-mindedness. That’s partly a function of different coaching styles and partly a reflection of how the rules of the game constantly evolve (prompting changes in tactics as a result).

South African cricket, unfortunately, hasn’t been able to silence its accusers. Since readmission, our cricket has been described as solid and professional by its more charitable biographers. At worst it’s been described as stale and without any flair. For the best part of the last decade, both the Test and ODI teams were captained by Graeme Smith. His fans (I do not count myself among them) speak of his leadership qualities. Certainly his never-say-die attitude has helped to rally the troops in the past, but has he gone far enough to inspire them? I remain unconvinced.

Smith has captained the team to many famous victories, which include series wins in England and Australia. He’s imposed himself on adverse situations and carried the team over the finish line by dint of his force of will and sheer bloody-mindedness. He shines at his brightest when the pressure is ratcheted up and the team is on the back foot, but is seemingly happy to coast along when the Proteas are leading.

The most obvious symptom of his killer instinct bypass operation is the relatively tame fields that he sets for our bowlers in tests. During the recent series against Sri Lanka the Proteas had the visitors hopelessly outgunned at both Centurion and Newlands. It was bad enough that Smith eschewed a third slip at Centurion when yet another Sri Lankan wicket had fallen, or took off the fired-up Philander-Steyn duo in the first innings, gifting the visitors 50 runs more than they deserved. At Newlands, with about a bazillion runs in the bank and the match in the bag, I don’t remember him sparing more than three men behind the wicket for Imran Tahir.

Tahir is a bowler with enough turn and variation to warrant at least one more man on the leg side, and he might have had another wicket with more support from his captain – one or two sharp chances evaded short leg but might have been held by a leg slip. Even if he hadn’t, the support and faith shown by a captain can do wonders for a bowler’s confidence. Conversely, when a captain sets a defensive holding-pattern of a field for his bowler, he’s subconsciously telling him that he doesn’t expect a wicket from him.

It’s the failure to hold his knee fast against his enemy’s windpipe and finish off the job that tarnishes his captaincy in my eyes. Contrast his approach with that of Steve Waugh, a junkyard dog of a captain who could smell fear coming off the opposition and it made him want to kill and break bits off them. Even a captain like Michael Vaughn, when he realised that Matthew Hoggard was doing something terrible and brilliant to the Proteas at the Wanderers duly supplied him with 12 slips, three gullies and various other fielders in catching positions so that he could do his demolition job properly.

Maybe part of the problem has been the unfortunate ‘chokers’ tag that has hung around the metaphorical neck of the team like (ahem) a millstone. The Proteas have spent so many years trying to shake off the label that they haven’t spent any time discovering how to be positive and proactive when they play. During former coach Mickey Arthur’s tenure the stated goal and catchphrase was to play “brave cricket”, but that was successful like Kelsey Grammer post-Frasier.

The talent is there. It’s just not always utilised properly. How much of the blame can be laid at the feet of the captain and how much at the feet of the sports administration is difficult to say. I’m inclined to blame Smith for the most part. (Such is my bias and freely admitted, too.)

To be honest, when I heard that the ODI captaincy was to be handed from Smith to AB de Villiers, I didn’t expect much to change. Pretty with the bat, good behind the stumps, and photogenic on the cover of a gospel album, he comes across as boy-next-door and completely predictable. I was wrong.

In the first ODI, his desire to win was evident in his batting, where he made 52 runs off just 40 balls. Most of the time, he seems to bat so effortlessly and so quickly that nothing seemed out of the ordinary. It was in the second ODI where his ruthlessness was laid bare, where he showed that he could crush the enemy under his jackboot. It was beautiful to watch.

The stage was set with the unearthly run-out of Dilshan courtesy of Faf du Plessis in the first over. The Sri Lankans remained half-stunned for too long after this initial blow and never really got their innings started, but de Villiers kept them clamped tight in the vice, taking the bowling powerplay at the earliest opportunity, setting attacking fields and drying up many of the runs. When Sri Lanka’s second wicket fell in the 29th over, De Villiers sent more men inside the catching circle, placed second slips and generally did his best to breathe down the visitors’ necks. I rubbed my eyes and adjusted the colour on the TV, but sure enough it was the Proteas playing.

The Proteas won the five-match ODI series in the first three games. The first game was an easy romp and a great cosmic first ball to be bowled as captain. The second game was taken by the scruff of its neck and De Villiers tried every trick to shut the Lankans out of the game. The third was another slightly lucky gift from the gods.

The fourth and fifth games were ultimately won by a resurgent Sri Lankan side, but De Villiers continued to attack and press the advantage when he had it. Batting first in the penultimate ODI, he took the batting powerplay as early as the 22nd over while at the crease with Smith. Smith holed out during those five overs and De Villiers clubbed three fours and three sixes, going on to make 96 runs off 76 balls. There could be no better tableau to depict the changing of the guard.

The new man in charge seems to be ready to go Genghis Khan on the opposition at the slightest provocation. Long may it continue.

The final ODI was a complete letdown. Probably all of the excitement and adrenaline had caught up with De Villiers and he was mentally tired. Certainly the Wanderers was a bit of a paint-by-numbers affair. But if this first series is anything to go by, the Proteas are no longer going to die wondering what might have been. They’re going to die trying, at least in the ODIs. The new captain is able to think on his feet, is capable of winning games on his batting alone, and is issuing his bowlers all sorts of licenses to kill.

Whether we ultimately win a World Cup with our new Proteas: Black Ops edition is not important. What is important is that we might be ready for a brand of cricket that is smart, aggressive and very attractive to watch. Save the nice boy routine for the Musica Megastore shelves, AB. On the field, don’t stop going for their throats. DM