The AU Summit: A rare ring of truth

The AU Summit: A rare ring of truth 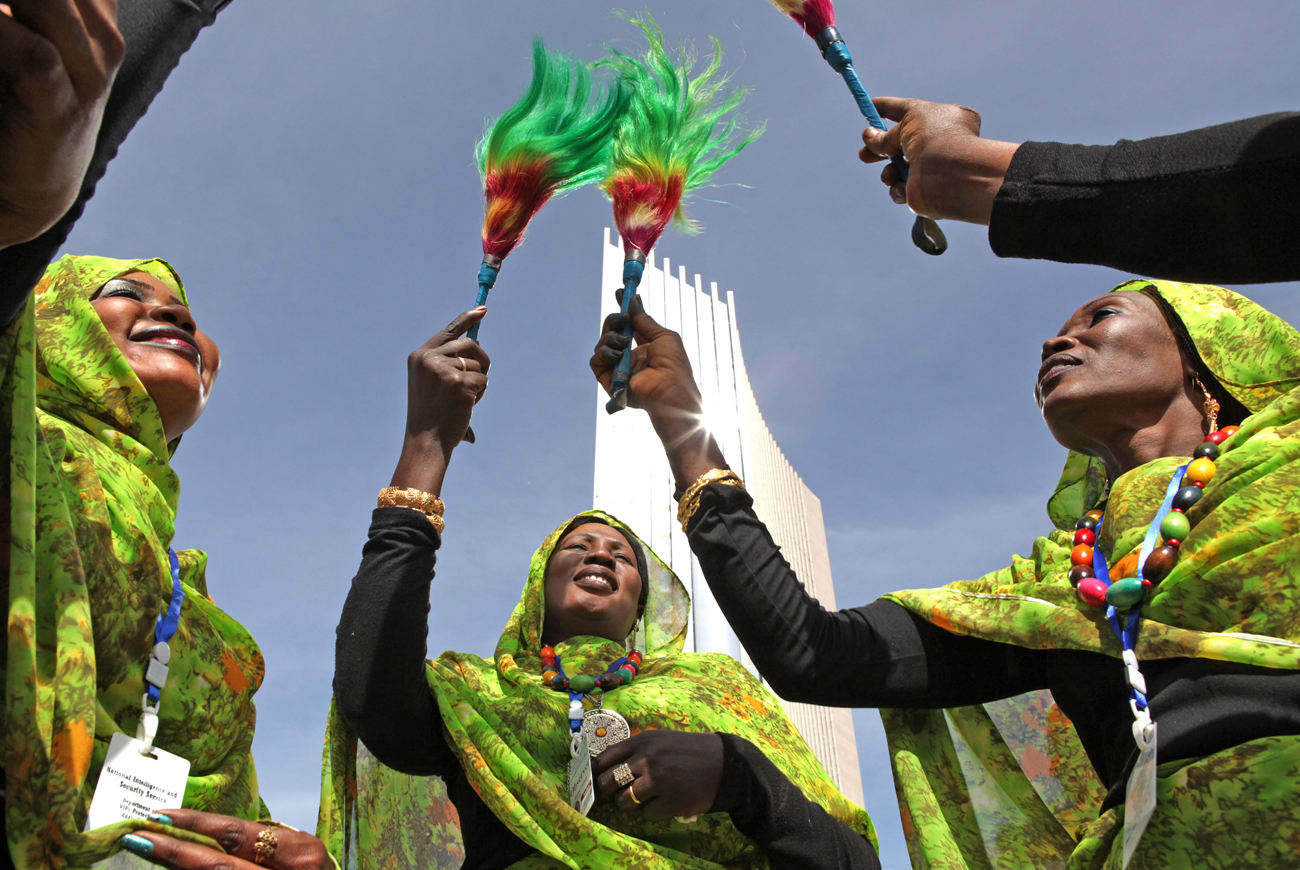 Since the Organisation of African Unity was formed in 1963, most of the gatherings of our pan-African institution—now known as the African Union—have been characterised by empty speeches and grandiloquent (often self-serving) back-slapping. But at the inauguration of the new AU headquarters in Addis Ababa, built for free by the Chinese, one head of state spoke a trenchant truth. KEVIN BLOOM was there to hear it.

The proceedings may have started thirty minutes late, and some of the scenes looking down from the gallery may have been typical of the occasion—brigadiers in dark glasses embracing democratically elected heads of state, etcetera—but there was something about the inauguration of the new African Union headquarters in Addis Ababa on Saturday 28 January that was new: the words, to be exact, of the Ethiopian prime minister Meles Zenawi. What was new about them, in the context of every speech promising African growth and development that’s filled the halls of every AU (and previously OAU) gathering since 1963, was the ring of truth.

“This magnificent edifice is built on the ruins of the oldest maximum security prison in Ethiopia,” Zenawi began, setting up a metaphor that he would carry through to the end of his address. “When prisoners entered it, they would say to themselves, ‘I have given up on this life’.”

The allusion, of course, was to a world that had given up on Africa. Zenawi spoke about the “lost decades” of the late twentieth century, and blamed the continent-wide economic slump of those years not just on internal failed leaderships, but on the misdirected interventionist measures of the West. “We were given medicines,” he said—referencing no doubt the structural adjustment programmes of organisations like the IMF—“that were worse than the disease.”

Extending the theme, Zenawi mentioned prominent academics in Western universities who’d suggested then that “recolonisation” was Africa’s best chance; he brought up the Economist headline that scandalised just about every African who came across it at the time…yup, that famous “Hopeless Continent” thing. And then, with almost no fat in the speech (none of the four-syllable words and empty posturing that would characterise a certain gentleman who followed him, of which more shall be said later) he segued directly into why and how things are now different.

He spoke of economic surges and “access to new powers of finance and growth,” he emphasised the fact that Africa for the first time in almost half a century is beginning to make its own decisions, and finally he said, “We are now seeing the results of our struggle for survival.” When he came around to a recent cover line of the Economist magazine, the one that proclaimed “Africa Rising,” everybody in the brand-spanking-new conference hall clapped spontaneously.

Which may say something about how African leaders—and all fifty-four countries of the continent were represented on Saturday—continue to measure their success in terms relative to the opinions of the West, but so what? In a globalised world it’s impossible, and perhaps even disingenuous, not to. Besides, there’s something poetic about showing up the old playground bullies.

As for the truth in Zenawi’s words, the fact that the president of the AU host country wasn’t dealing in platitudes, the evidence was emerging as he spoke. Just outside, on the streets of Addis Ababa, cranes loomed above every third or fourth block, high-rises and office buildings rose up from the sprawling shack-lands, and plans were being laid for a rapid transit system. The findings of a much-quoted report out of the Mckinsey Global Institute, released in June 2010, were becoming manifest in real time.

Consider, for instance, the following top-line statistics out of the Mckinsey report: Africa’s collective GDP in 2008 was $1.6 trillion, roughly equal to Brazil’s or Russia’s; the continent’s combined consumer spending in that year was $816 million; 316 million new mobile phone subscribers had signed up since 2000; 60% of the world’s total arable and uncultivated land was in Africa; and there were only 20 African companies with revenues of at least $3 billion. In 2020, Mckinsey predicted, the stats will look like so: collective GDP of $2.6 trillion; $1.4 trillion in consumer spending; and 128 million African households with discretionary spending.

That, in a nutshell, is the fastest-growing continent on earth. And it’s in no small part thanks to China, who “donated” these new AU headquarters, and whose delegation on Saturday—headed by the fourth most powerful man in the People’s Republic, Jia Qinglin—were treated like royalty. Still, it’s not only China’s interest in Africa’s resources that’s driving the growth; India, Brazil, Russia, Saudi Arabia, the list of nations and companies that are moving in here is long, and getting longer.

Of course, some things have remained the same. The incomprehensible ramblings of Teodoro Obiang Nguema Mbasogo of Equatorial Guinea, current chair of the African Union, being one example. Obiang spoke fourth on the list, after Qinglin (Jean Ping, the AU commissioner, was the forgettable opener), and it was kind of hard to forget the memorial to human rights in Africa that had just been erected on the building’s perimeter. Obiang has, after all, ordered the torture and execution of tens of thousands of his countrymen; he’s a man declared by his own state radio as Equatorial Guinea’s “god,” with “all power over men and things”. With a personal net worth estimated by Forbes magazine at $600 million, he is also incidentally one of the world’s wealthiest heads of state. DM